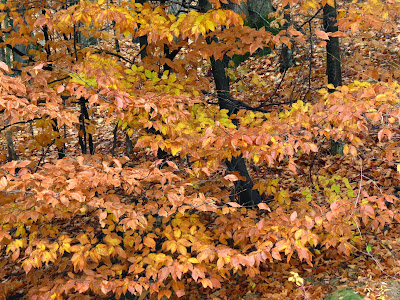 Writing a letter to my sister the other day with pen and paper, I thought I'd transcribe the long pages about my current reading here to the blog, so that's today's topic.

We got outdoors this morning to snow on the ground in Leelanau County. We're on the cusp of winter, David says. Still bits of color in the orchards, while along the roadsides and in the woods predominant color is now brown, the toasty brown of oaks and beeches.

I’ve been reading a little book about life on South Manitou, back when there were still people farming on the island. There were 13 families in residence in 1870, and during 1917-18 there were 30 students enrolled in the school. Besides farm families, some of the Coast Guard men brought their families with them to live on the island. There were also two sawmills in operation in 1913. Timber had been the first reason for white men to stop on the island, as they needed wood to produce steam power for the lake boats.

Life on South Manitou Island around the time of World War I, according to descriptions in Isle of View: A History of South Manitou Island, by Charles M. Anderson, was in many ways very similar to life in remote Siberia today, as shown in that documentary about the trappers I was telling you about, “Happy People” [I had the title wrong before] -- for instance, skis made by hand, in the same manner, both on the island 100 years ago and in Siberia today. The book is really a memoir, not a history, but since the author came to the island with his family from Wisconsin when he was only five years old (1913) and lived there for 13 years, working on the family farm, going to school, exploring the island with his brothers, and finally going out on Lake Michigan with his father, there is a lot of detail about how the islanders lived. The author’s youngest brother was the last child born on South Manitou, in the year 1921. His oldest brother, age 21, died the same year, of diabetes.

Farming was all done with horses. Anderson writes that he could plow only 2 to 2-1/2 acres a day, using three horses, and after the field was plowed it had to be dragged and marked out for planting, which was done by “two people pulling a pole about 24 feet wide with 7 chains attached to the pole 30 inches apart.” The author adds, “The field had to be marked two ways, 30 inches apart, and then it was ready to plant. Pulling or pushing that marker, I believe, was one of the hardest jobs on the farm for a child of twelve years old, as I was at the time.” David liked the bits about the bull with the ring through his nose, led by a long stick attached to the ring. Also attached to the ring was a heavy chain that dragged on the ground. The idea was that if the bull wanted to run someone down, he would step on his own chain and stop himself, but the bull was smart and learned to straddle the chain so he wouldn’t trip on it.

The Anderson family planted corn, rye, and oats, mostly for their livestock, and for themselves they also raised potatoes, carrots, beets, onions, cabbages and apples. Popular orchard varieties on the island were Greening, Northern Spy, and Wagoner apples. Many families made their own maple syrup (as they did on the mainland, as well), but you may be surprised to know that they also made a great quantity of hard cider from those apples. This was during Prohibition, but on the island no one cared about that, except to hide the evidence whenever there was a rumor that the Feds might be coming to look around. (No one ever did.) It sounds like the cider was for local social consumption, not for sale.

Another surprise crop (to me) was ginseng, which also grew wild on the island. When we drive to St. Paul, we see fields of ginseng in Wisconsin, under netting to protect it from the sun, and a lot of South Manitou islanders came from Wisconsin, so maybe that’s part of the explanation. Or maybe there was just a good ginseng market in those days. One farm wife left the farm, divorced her husband but stayed on the island, and opened up a little shop near the Coast Guard station. She sold chewing gum, candy, and wild ginseng, which she hunted herself. A couple times a week she took homemade bread to her former husband, and in return he supplied her with firewood. He had, by the way, a lot of cats, “about ten,” and that might have been all it took to drive his wife away from home. I think five cats would drive me away.

So marriage wasn’t always “forever” in that place and time, and that may be another surprise to some people reading the story today. One of the mail carrier’s sons was married and divorced five times! Another man, 65 years old, came to the island with his third wife to help the author’s father make cement blocks for the foundation of a new barn. When he arrived on the island, he had already fathered 25 children, and his twenty-sixth was born while he and his wife were on the job there. Yes, his wife was helping make the cement blocks, and perhaps the first and second wives had died after so much childbearing and work. The author doesn’t say. The twenty-sixth baby died shortly after birth.

Some islanders never married at all. One man farmed with his brother and died single at the age of 78. When he visited the author’s family in the evening, “he always sat in the same chair. Dad would ask him to sit in a chair near him, but he never would.” Can’t you just see it? Such a little detail makes the old bachelor farmer more than just another name.

Here’s another detail of island life that might not occur to us: they had no toothbrushes! The Anderson family did not even have their own well but had to haul all their water, for all purposes, from either Lake Florence (their source of ice, cut in winter and stored in sawdust to use during the summer) or from a neighbor’s well. If a tooth had to be pulled from man or beast, there was a man on the island to do it, but the author was 21 years old before he had his first toothbrush. I can imagine living without electricity and even without running water, but without a toothbrush?

The Andersons left the island to move to Frankfort when Charles was 18. By then he had already been sailing with his father for two years, carrying various cargos from one Lake Michigan port to another. Loading grapes from Benton Harbor to carry to Sheboygan and Milwaukee, Wisconsin, they learned of the House of David community near Benton Harbor. Charles Anderson says the whole family was glad to move to the mainland, but he went back to visit the island year after year and clearly loved it very much. At the close of his book, he laments the overgrowth of old paths and trails since the Park Service purchased the island. My impression is that the neglect he perceived has been remedied in years since.

It seems ridiculous that I lived for years in Leland and never managed to take the ferry over on a day trip and still live close enough to the ferry dock that it would seem a simple voyage to undertake. I always think I’ll do it in the fall. (Don’t want to face mosquitoes in spring or crowds in summer.) But the ferry season is over for another year now, and it’s another year I haven’t made the trip.

Maybe I should make that a priority for fall of 2014?

Anyone interested in reading about South Manitou Island online can find information here. 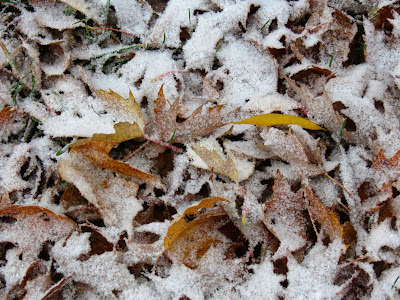