September Authors (Two Local, One Not) at Dog Ears Books 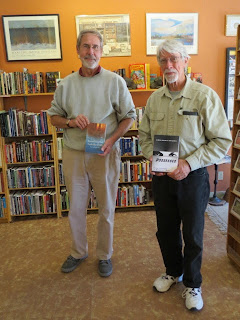 By a happy coincidence, both local authors happened into the bookstore about the same time on Thursday afternoon. On the left is Don Lystra, with his short story collection, Something that Feels like Truth, and on the right is Ken Wylie, with his novel (written with a co-author), Possessed.  To friends and family, as well as to booksellers and writers’ fans, it always seems like a long wait for a new book, and it’s exciting when the boxes finally arrive, even before the authors visit to check up on bookstore orders. Both Wylie and Lystra will be appearing at Dog Ears Books this month (see schedule at right). Another lucky coincidence: one customer happened into the shop at exactly the right moment, bought both books, and acquired both authors’ signatures on the spot.

Something that Feels like Truth is published by Switchgrass Books, an imprint of Northern Illinois University Press, publishers of Lystra’s award-winning novel, Season of Water and Ice. In fact, one of the stories in the new collection was the seed from which the novel grew. Don Lystra came late to the writing of fiction, after a lifetime career as an engineer, but he has a sure touch for character and dialogue, and those who have been impatient for another book from him since the novel came out will not be disappointed in Something that Feels like Truth.

Possessed is, as its publisher, Sunstone Press, announces on the book’s cover, “a novel inspired by true events.” The events took place in northern Michigan and culminated in a murder trial for which Philip J. Crowley, the book’s other co-author, was the prosecutor. Even knowing the outcome of the trial, however, I found the book gripping and suspenseful all the way through. Fictionalizing the story has allowed the authors access to characters’ thoughts and feelings – which makes for sometimes nerve-wracking reading but this feels like truth, too, as do the descriptions of northern Michigan nature that are woven seamlessly into the story. 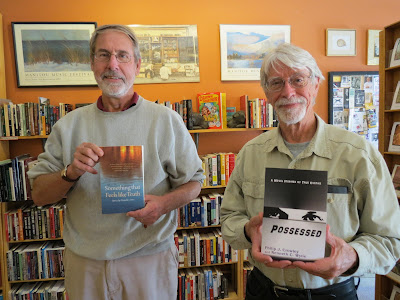 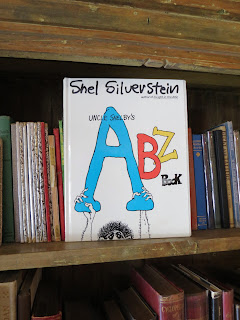 Another newly arrived book, neither new nor by a local author, is Uncle Shelby’s ABZ Book, “sometimes described as ‘subversive,’” according to one online source. The book was expanded from a feature the author did for Playboy magazine, so it should not be mistaken for a children’s book, because in it Shel Silverstein suggests to children (his pretended readership) that they drink ink, stick their fingers in fire, and take scissors to Daddy’s hair while he is sleeping. He tells them there is no Santa Claus. He gives them all kinds of bad and sad notions. Most adults will hoot with laughter, but some adults say they hooted with laughter when they discovered this book as children, too, so hey! It’s your call with your own children and grandchildren.

Shel Silverstein was born on September 25, 1930, and died at the age of 80. Did he ever grow up, or did he remain forever a kid at heart? How about you?

Such success! I hope you'll start adding little video's of these authors from their talks...so that even those of us on the West Coast, can enjoy the experience. Kudos to you all --

Alexis
Writing from the Bay Area.

I've had trouble (and no success) trying to upload videos, Alexis, but I appreciate your interest and hope all is well for you West. Weather here is gorgeous this week -- perfection continues!