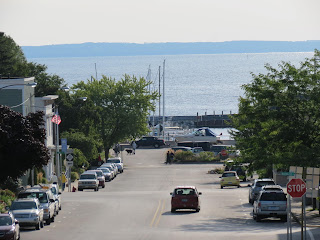 Friday mornings in summer and early fall are special, thanks to the excitement of a colorful farmers' market with lots of local fruits, vegetables, flowers, bread, cheese, meat, jams and jellies and lots more, all set up down by the marina parking lot, just out of sight in the photo at left. The weather on the last Friday in August was a challenge for all concerned -- driving thunderstorm, horizontal rain, and hailstones, too! -- but September 6 gave us a beautiful morning.

I like to get to the market early, before long lines form at my favorite vendors' stalls. It has been greatly expanded from the previous year's already wonderful array and is a social occasion for many local residents, along with a weekly shopping trip. Isn't that what a traditional market day is all about? 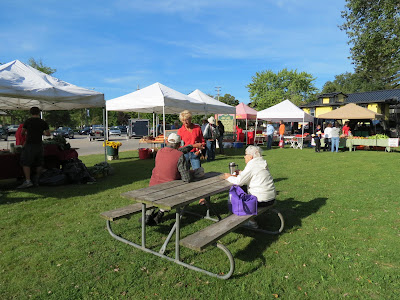 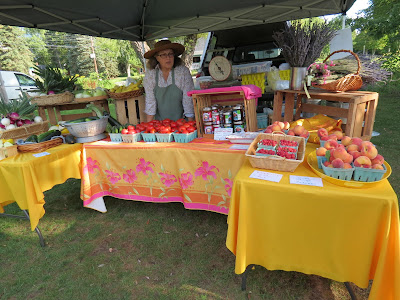 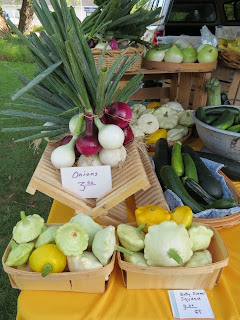 I had already bought green beans and tomatoes before making a beeline to Kathy's display for a bunch of onions, and it was a good thing I remembered those onions and went after them, because her cucumbers were on the same table, and what would my gazpacho have been without cucumbers? She threw in a couple of small tomatoes, saying they needed to be used right away.
From the Northport events calendar sent out from the NCAC (Northport Community Arts Center), it looks as if Friday the 13th will be our last market day of the 2013 season. I'd love to be wrong about this, but either way you don't want to miss this coming market day in Northport, if you're anywhere near. It is definitely the place to be in our small town on Friday morning.

Report of my Gardening and Gathering

It was a good year for strawberries and rhubarb in my garden. Delicious pies resulted, and there is still rhubarb in the freezer waiting to be canned as sauce. Later summer and early fall have brought wild raspberries and blackberries in abundance, with the jam-making ready now to move into its final phase. 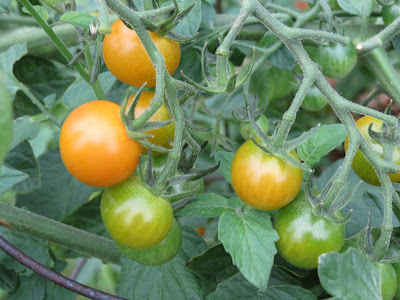 Collards did well. Tomatoes were late but prolific. Sweet little orange cherry tomatoes have a growing habit much like the berries on deadly nightshade, accenting the mysterious family relationship between the edible and inedible. Acorn and butternut squash and pumpkins are looking good. But eggplant? What do you say to eggplant that doesn’t blossom until September? And my pretty little plum trees definitely need to be pruned this winter, branches eliminated so that the trees will put more energy into fruit and less into wood and leaves. It will be worth it. The small golden fruits with rosy skins are delicious.

Overcoming shyness about photographing people, I have lately been doing just that – always and only with willing subjects, of course –and have been so pleased with the results that I asked a couple of friends if I could post their portraits on my photo blog. The first two, once they saw their pictures, said yes with no hesitation, and so, far from feeling as if I’ve “stolen their spirits,” I feel I’ve given them a mirror to see their beautiful selves and have shown those beautiful selves to others now, too. I would never do this without the okay of my subjects, but they seem very pleased, and that makes me happy.

Happy P.S. to this subject: A third friend said yes to my request! 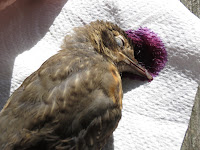 A poor young robin, adult size but still speckled, smacked into our front porch window early on Sunday morning. I’d gotten up early and was out there reading when I heard the telltale THUD! and went out to see what kind of bird had had the accident. Tried to feel for a heartbeat, but such a tiny heart it would be! I was clueless. Left it for an hour, hoping it was only stunned and would revive, but -- no such luck. Picking it up with a paper towel, I saw that the young bird had been feasting on late summer blackberries, and I hoped its short life had been a happy one.

awwww...we have bird tragedy here too. Always breaks my heart. Your farmers' market looks fabulous! Also your yellow cherry tomatoes. So much to do in the fall. I hope we have a long fall to get it all done, then a short winter. I hope. Hope....

A long fall is always good. Winter? Well, we need precipitation to recharge the water table and lake levels, and snow in winter is better than rain, but if I had my wish it would be gentle, with snowfall spaced out over time rather than dumping all at once!

P.S. on Friday, 9/13: Today is the last OFFICIAL market day, but some of the hardy sellers say they will be back next week and as long as the weather permits and they have stuff to sell. Yea!!!