Quiet Reading to Quiet the Mind 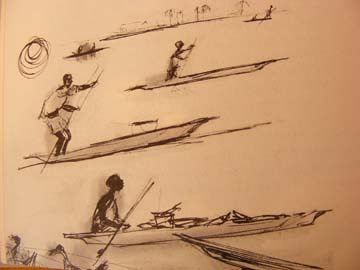 The fireworks are over. There’s still a lot of traffic in town, but I seem to be craving contemplative reading in the moments I steal (from business, garden, housework and socializing) for books.

Good things come from a quiet place: study, prayer, music, transformation, worship, communion. The words peace and quiet are all but synonymous, and are often spoken in the same breath. A quiet place is the think tank of the soul, the spawning ground of truth and beauty. 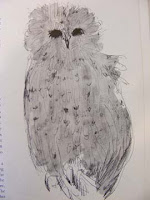 So goes the second chapter of Gordon Hempton’s One Square Inch of Silence. An acoustic ecologist who has done many award-winning recordings of natural sounds, Hempton decided to drive across the United States, from west to east, in his 1964 VW bus, and the book is that story. There is something in it for everyone—for the camper and the naturalist, as well as the techno-geek. Hempton measures sound and noise in A-weighted rather than simple decibels, the A-weighted scale measuring frequencies more easily heard by humans, with each dBA jump a doubling of the sound wave power. Thus a mere

...40-dBA increase represents more than a doubling of the audible acoustic energy 13 times over. If you had a dollar and doubled it 13 times it would grow to $8,192.

When Sarah and I go for an overland morning or evening ramble, I notice more than birds singing and bees buzzing. My ear may catch rooster crowing from a nearby farm, often an orchard sprayer in the distance (if the sprayers are working closer to home, we don’t go for the walk), and sometimes traffic murmur comes up from M-22. Some people get upset by the sounds and smells of farming, but I moved to the country knowing it was farm country, and for me it’s a total package. Town noises? I find those more trying, particularly gasoline-powered weed-whackers and leaf-blowers, so loud their operators need ear protection, used on tiny jobs where unpowered hand tools would do the same work more quietly.

Hempton distnguishes between outer quiet and inner quiet. The latter he calls a reverence for life, “a feeling we can carry with us no matter where we go,” because it “resides at a soul level.” The artist Frederick Franck, author of The Zen of Seeing; Zen Seeing, Zen Drawing; and Simenon’s Paris, to name only a few of my favorites, knows this inner quiet. For him, drawing is meditation, and for me (as I’ve written on other occasions) just reading his words and gazing at his drawings is meditation, too, a quiet refuge from a noisy world. One of the “treasures” I scooped up at last Saturday’s library sale—not in terms of market value but in terms of what it’s worth to me, personally—was Franck’s African Sketchbook, published in 1961, exactly half a century ago.

While drawing I am aware of life in myself and my subject, I am aware that all that lives moves, however imperceptibly. The young goats, the birds on the branch, the wind-blown grasses, even the dying in hospital wards—all these move. Drawing is the following of this living moment. And where things appear to be dead, like shells and stones, their very structure reveals the congealed movement which formed them, the crumbling movement of their disintegration bathed in the ever changing movement of the light by which the eye perceives them.

Isn’t that wonderful? “Drawing is the following of this living moment.” A drawing cannot be made in an instant. The hand moves along with time, and the mind that holds the pencil engages with each passing moment, entering into the world, quieting the noisy self. Sometimes the most noise comes from one's own mind.

The images on this post are from African Sketchbook. Just looking at them, I feel more peaceful. How about you? 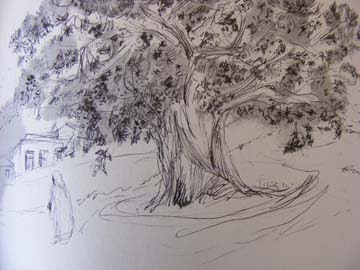 They are lovely, quiet images. Interesting how "quiet" is not the same as "silent"--that leaf rustle and bird twitter and bee hum are part of peace and quiet.

Radio bothers me; birds do not. Motorcycle noise irritates me; tractor noise does not. Sometimes at night Sarah will heave a big sigh in her sleep, and that's a comforting sound.