It's So Northport! It's the DOG PARADE! 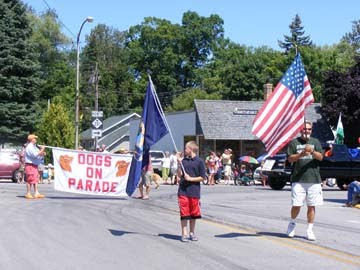 Gracie, the dog belonging to my sister and brother-in-law from Illinois, was registered as dog #1 and our Sarah as #2, but they did not lead the parade. First came the Fish Queens on the fire truck. 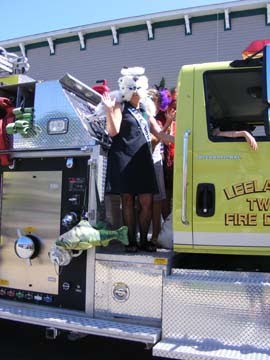 Then the flag-bearers (see top), followed by the banner-carriers. Recognize anyone famous in this shot? 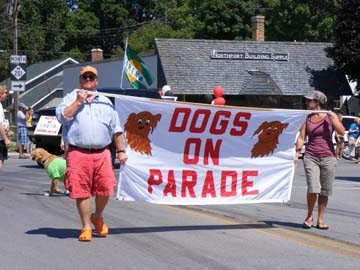 Next came the mayor of Omena. No, not the walker—it’s the dog who was elected mayor (honorary) last year in a fund-raiser where votes could be bought for a dollar apiece. 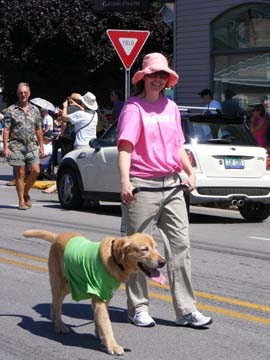 Then there was the mayor’s whole town council. 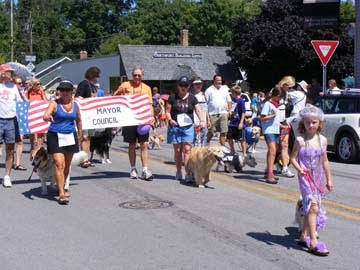 Among the councillors was Bruce Balas, wearing a shirt from Dog Ears Books! Bless his heart, that angel! 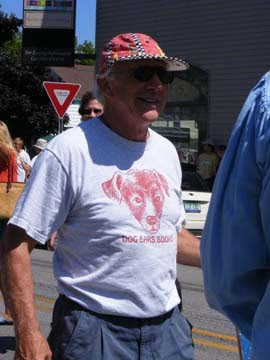 Then, at last, “our girls,” Sarah walked by my brother-in-law, Ben, and Gracie, walked by my sister, Bettie. Gracie wore a scarf. Sarah wore a smile. 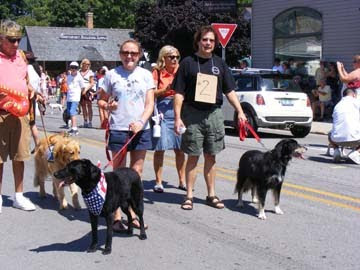 Here are some folks who really got into the spirit of the theme, “When the Dogs Come Barking In.” 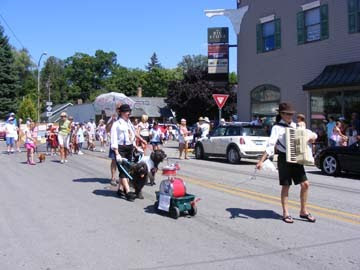 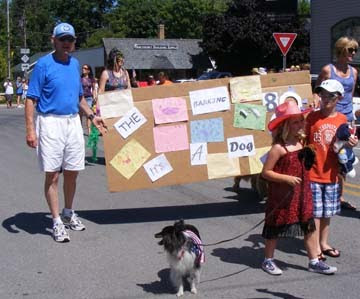 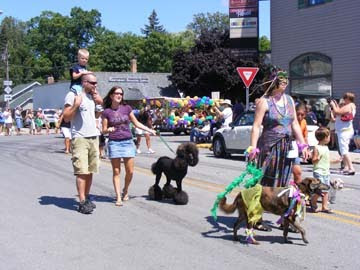 Others had a message of their own to get out. 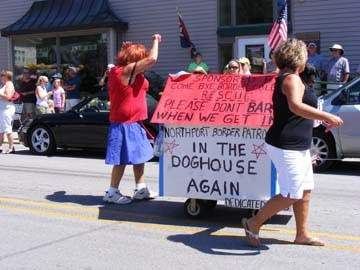 The band was GREAT, as always!!! 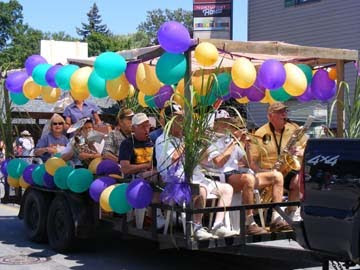 Some dogs were walked, while others were carried. All were good-looking. 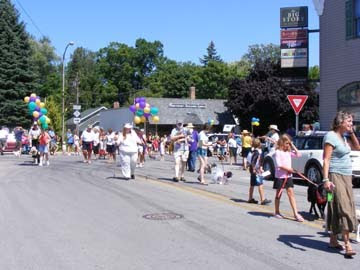 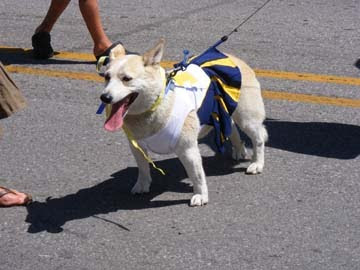 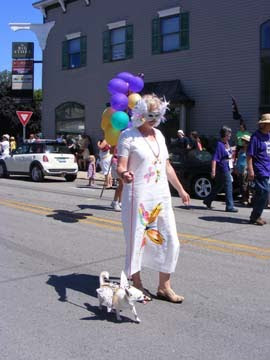 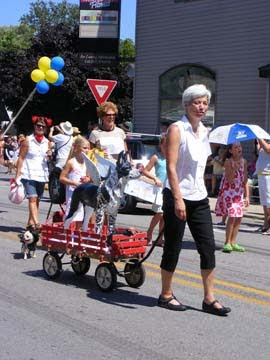 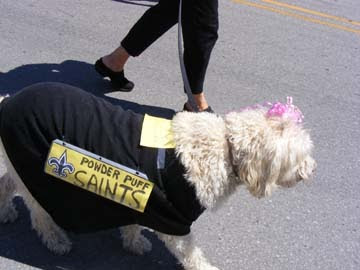 Andy and Gloria Thomas reminded people that there’s still time to buy a raffle ticket to support the Northport Promise scholarship program. You might win a new BMW. 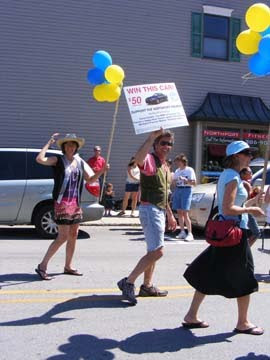 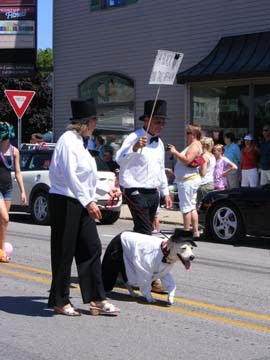 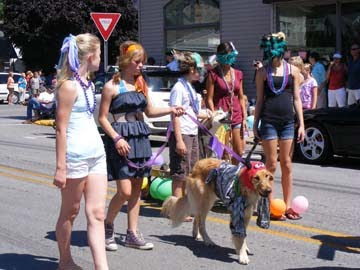 ...And old cars, too. This one carried musicians. 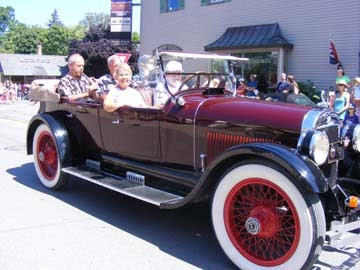 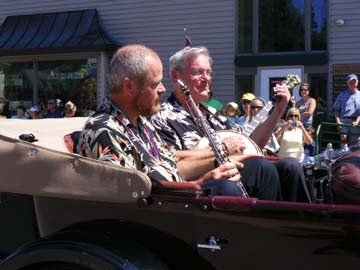 Even the hot dogs had their own float. 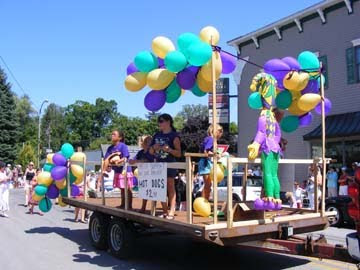 Friends of the Library rode in a Stanley Steamer. 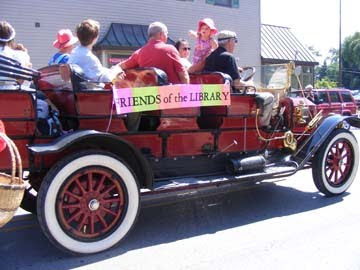 When you see these ladies in their trompe-d’oeuil costumes, you know it’s the end of the parade until next year. 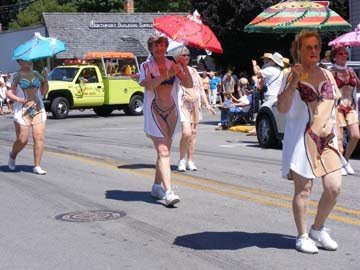 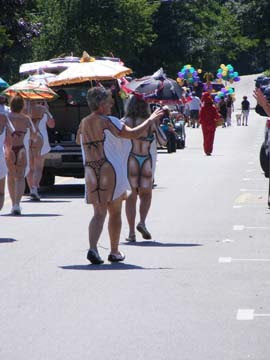 Sarah came back to the bookstore wet! She and Grace got to take a little dip in the bay to cool off after the parade. I think the dog cousins had a good time. 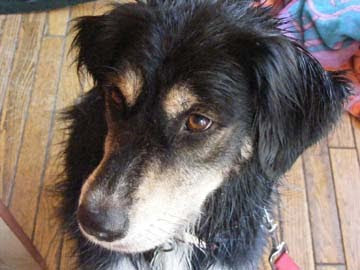 That was so much fun! I swear you have more fun over on that side of the Bay. I want one of the tromp . . . trompe . . . one of those t-shirts. In fact, I want a whole wardrobe of them. Tell Sarah she is a pretty girl and give her a pat for me.

Hi, Gerry! There were many more women in those outfits. They were a whole--what do you call it in a parade? Unit? As for fun, Northport's spirits were dragging a few years back, and the response was to up the fun quotient. It's worked like a charm! We smile and smile and laugh and laugh and clap our hands and fall into bed exhausted every night. I'll give Sarah your message. Thank you!

Wonderful fun!! I LOVE the t-shirts too!! Haven't seen a parade in so long, what fun to go along and see yours!

So glad you could come along, Dawn!

Next year I think it will be Bosco's turn to go north and be in the parade. Maybe both sisters could drive up from Illinois together and bring Sarah's dog cousins. I've always wanted to go to this parade and with sister B going this year it must mean I get to be there next year.