Friends and Road and Sunshine 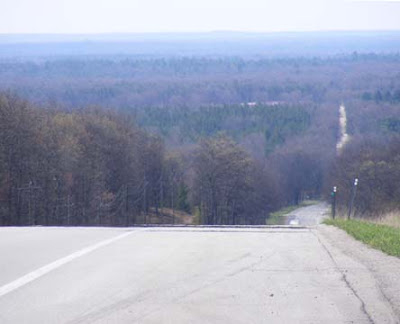 There it is: my road. I feel very proprietary toward it, and you can have your old expressway. Just leave me M-37, shown here looking south, from near Baldwin. It’s one of my favorite roads in the world because (1) it’s two-lane; (2) it goes through lovely forest; (3) it goes through little towns; (4) traffic on it is usually light; and (5) whether I’m driving north or south, it’s taking me to people and places infinitely dear to my heart.

Wednesday was a cold, grey morning in Traverse City, but on down the road a while the sunshine broke through and stayed with me for the rest of my time away. Trees and shrubs and flowers were blooming everywhere in Kalamazoo, dogwood in its delicate, ethereal, just-beginning phase. 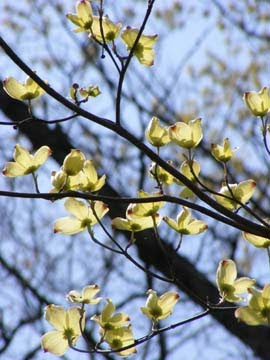 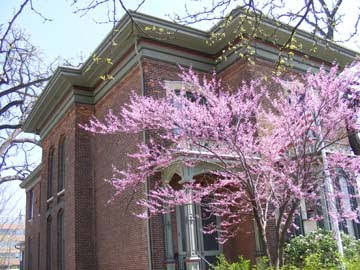 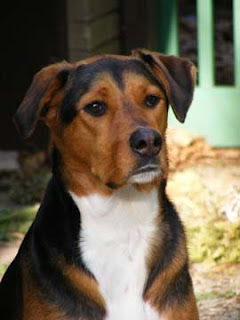 While Sarah was not with me (I kept thinking she was in the back seat, then remembering she wasn’t, and this happened over and over), my friends’ dog, Nadine, added her doggie best to the ministrations of Godfrey and Laurie, extraordinary hosts, to comfort and cheer a battered soul. Five stars to my friends! 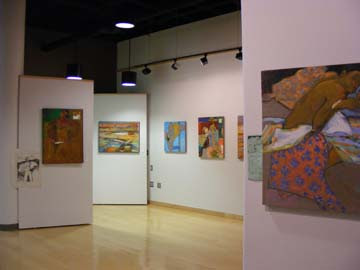 The visit held too much for me to describe and illustrate it all, and I didn’t even get pictures of everything. For example, I can’t believe I forgot to take pictures of Vaughn Baber and Bicentennial Books on Westnedge Avenue, a shop flourishing in that neighborhood since 1975. My friend Barbara Buysse’s show of paintings downtown in the Epic Center (Arts Council gallery) I did photograph, going back a second day to do so. Seeing that show was one of my primary motivations for making a trip I could scarcely afford at this time of year; seeing my son again and friends I missed on our whirlwind passage through earlier in the month were other reasons. 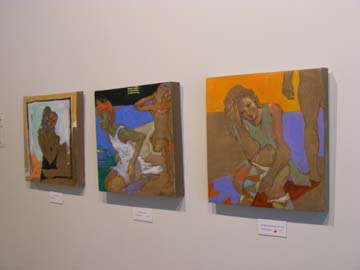 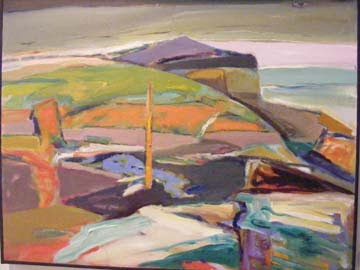 (I need to mention some books, at least parenthetically, so I’ll tell you that Barbara gave me an old travel-food memoir called Paris is a Nice Dish. Prices were given in old francs, very cumbersome after the war, what with inflation and all. I took along on the trip Guy de la Valdene's For a Handful of Feathers. More about that another time.) 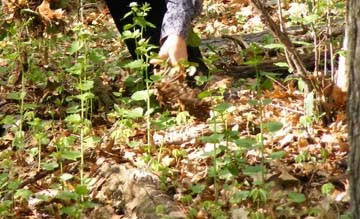 On Thursday, Earth Day, my friend Laurie and I worked in the woods behind her house pulling mustard garlic. We had done a big pull-out two years before--and she works at it steadily when I’m not around--with very good results. The object is to prevent this invasive species from taking over and smothering all the dear little local natives—the Mayapple, jack-in-the-pulpit, trillium, wild ginger, etc. 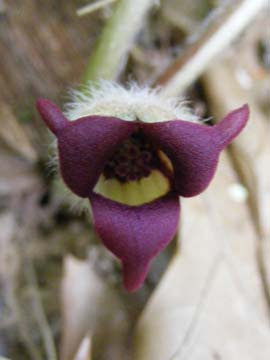 It’s a lot of work, all that bending and stooping, but the company and surroundings could not have been more congenial and beautiful, and we were both very satisfied to be observing the day in such an appropriate manner.

Now for today’s botany mystery. It shouldn’t be a mystery, because I should know the name of this grass, but it has slipped my mind. Anyone??? 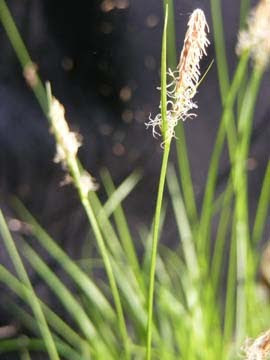 Then there was Friday’s trip home. I took a different route, starting by driving west to South Haven. Overwhelming! So many changes in that little town, so much new development, that I couldn’t even make my way to the beach! North along the coast I came to the tiny, quiet crossroads called Glenn, where I caught my breath gratefully. 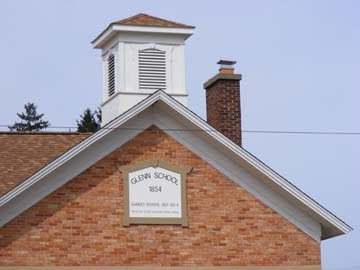 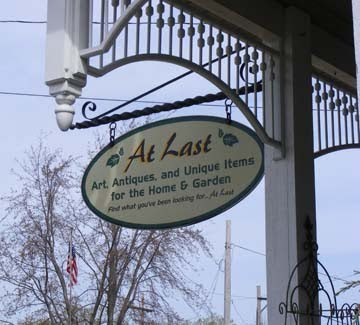 There was the sweet little shop owned by people who regularly visit Dog Ears Books; unfortunately, their shop won’t be open until May, so I could not return the favor, much as I wanted to do so. Outside of town were farms with little black pigs in one field, chickens scratching in a garden in another yard, a horse standing by a fence. Nice! I turned back to Glenn and followed the road north to a small county park. The bad news (though even they are beautiful) was all the zebra mussel shells on the beach. 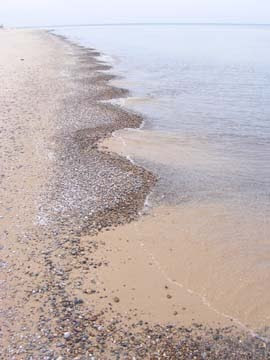 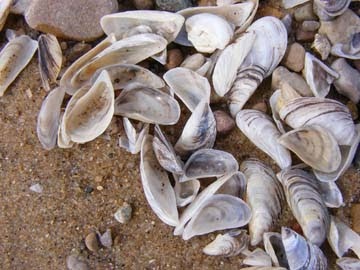 The good news, my reward for seeking out this beach, was finding what the locals there call a Glenn stone. It has another name. What do you call it? 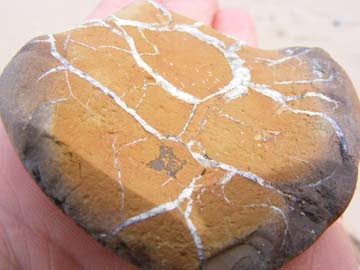 I love road trips. So much to see and you can stop whenever you want! Unfortunately I don't know what the grass is, or another name for the rock. But I did notice that the rock you found on the beach had very similar characteristics, color and shapes, to the painting of the rocks that your friend did. Is she working in oils or acrylic or pastels? I like her work very much!

It is interesting to see all the zebra mussels on the shore. I have seen them over here occasionally - where they are also an alien and a nuisance. I'll have to look up where they come from originally. They seem to like to cluster around the warm water outlets from power stations over here, for example, but I have also seen them in riverbed samples.
I loved the rock. I am afraid that I do not know what it is. The colour combination and the pattern of white streaks is attractive. I often wonder how the white (maybe calcite)forms in the stone. The two colours of the stone look like some limestone rocks I have seen over here at Eype on the Jurassic Coast: they are a blue grey colour that changes to rusty on exposure to air. I'll look out a picture and send you one.

Dawn, I think Barbara’s work is oil. I know it isn’t pastel. Interesting that you noticed a similarity (I had not) between her landscape and the Glenn stone. The landscape was from Scotland, far from Lake Michigan, but I see what you mean (now that you’ve pointed it out).

Jessica, the zebra mussels came into Lake Michigan on freighters, I believe—someone will correct me if I’m wrong. When boaters trailer their boats from one of the Great Lakes to an inland lake, the hope is that they will scrub the boat down well and not introduce mussels into those smaller freshwater lakes. Thanks for the photographs you e-mailed. They are very lovely, though very different from the Glenn stone.

I’ll leave the Glenn stone unidentified for a couple more days, giving someone a chance to beat me to the punch. The grass i.d. is also still up for grabs.

Dunno what the grass or the stone might be, but that's a splendid beetle's eye view of the wild ginger. I'm glad you had the sunny road trip and the visit with your son. What's all the rest of it for if we can't do these things?

Okay, the stone. We all know that common names can be misleading, as they vary from one part of the country to another, but one of the beach finds known as "lightning stone" describes the Glenn stone. Quoting from LAKE MICHIGAN ROCK PICKER'S GUIDE, by Mueller & Gauthier, "These consist of clay cemented into an iron mineral called siderite. These concretions form in part through bacterial activity. They become highly fractured and the fractures fill with calcite brought in by ground water. The result forms lightning-like patterns on a dark background."

The grass? I still don't know.

Very cool information on the stone!! Thanks for sharing it!