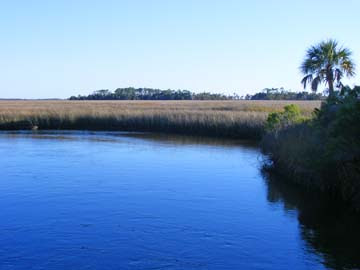 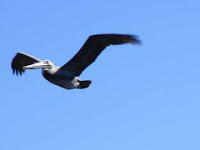 Besides the books one reads from start to finish—for me, those I’m keeping a list of this year, so as not to lose track of titles and authors—there are those one keeps at hand for reference. One such for me, this winter in Florida, is the National Audubon Society Field Guide to Florida, by Peter Alden et al. (NY: Knopf, 1998). Here is a list of subjects included: topography and geology; habitats; conservation and ecology; weather; night sky; flora (from algae and lichens to trees); invertebrates (marine, freshwater and land); fishes; amphibians; reptiles; birds; mammals. There is also a lengthy section on parks and preserves. This book keeps migrating from car to house, and I sometimes wish I had two copies—but that seems lazy and excessive, doesn’t it? Having only one copy, I had to run out and retrieve it from the glove compartment late yesterday afternoon to identify the longnose gar, Lepisosteus osseus, I’d seen lying on the bridge over the South Fork of Hammock Creek. (Why the fish were lying there, dead, is another question, one the book doesn’t answer.) And luckily we had it with us the last time we were driving around Tarpon Springs, so I was able to name the wild tamarind trees we were seeing in people’s yards. What names these Florida trees have! Such magic! Wild tamarind, chinaberry, sea grape!

Another at-hand reference book is my handy Dictionario manual de la lengua Española, for though it may or may not help with every trendy, hip word to be found in the magazine Vanidades, it will surely do for more ordinary, pedestrian questions of translation. The magazine, by the way, confirms for me what everyone already knows, which is that the vocabulary we understand, whether in our native language or another, is always larger than the vocabulary we use and that context is all-important to understanding. Just as Mickey Mouse comic books cleared up many mysteries of spoken French for me in Paris, articles on los royals ingleses or diseños aglobados, with clues provided in accompanying photographs, elucidate words that would otherwise hide their meanings from me. One small piece in a 2006 issue of the magazine, however, leaped out at me immediately, fully revealed: I didn’t need to look for the author of the newly re-issued Spanish edition of Quince días en las soledades americanas, knowing instantly that this was one of my favorite of Alexis de Tocqueville’s writings, Quinze jours dans le désert américan, or, in English, A Fortnight in the Wilderness, his account of the overland trek he and Beaumont made, on horseback with Indian guides, through what was at that time trackless Michigan forest. What makes the story particularly moving is the author’s acute realization that what he is seeing will not long remain as it is but will soon be “civilized,” the wilderness lost forever.

I’ve also decided that some books I will not read in their entirety this winter (maybe later), and one of these is Scott Weidensaul’s Return to Wild America (2005). It isn’t that the whole book isn’t worth reading but that I want to concentrate on where I am, and so it is the fifth chapter, “The South’s Wild Soul,” that is pertinent right now. (Michigan makes no appearance in this book that concentrates mainly on coastal America.) David and I have explored some of the edges of areas Weidensaul discusses. We did not penetrate deep into the Everglades but did walk the boardwalk at the Fakahatchee Strand, with its giant cypress and fascinating strangler figs. A bit of Florida terminology:

The water moving across lower Florida, through the Everglades and the Big Cypress, is a shallow sheetflow, but in a few places the slightly acidic water has, with time, eroded the limestone bedrock to create the long sloughs that mark strand forests. The Fakahatchee Slough is three feet deep—a river valley, in effect, or, in Owen’s phrase, ‘the Grand Canyon of Florida.’

Collier County wilderness is like nothing else in the country, but I appreciate the fact that Weidensaul started his search for wild Florida in the north, in the country most snowbirds hurry through or over to get to the warm, sunny beaches of Miami on the Atlantic or Tampa Bay or Naples on the Gulf of Mexico. Probably because it is so much cooler and lacks sand beaches, development has been slower in northern, less dramatic Florida, its inroads more modest. This description of Weidensaul's is what I see when Sarah and I go out in the mornings:

Foot-long mullet leaped across the water like skipped stones, and two little blue herons squabbled over a morsel. An osprey, its voice creaky, flew among the moss-draped cypresses.

Or some days, a variation-- 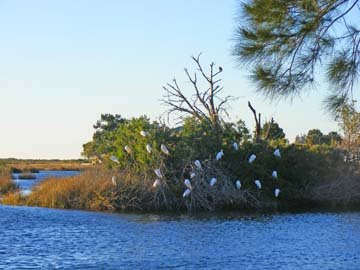 Out on Highway 19, the area may look like nothing but land pillaged for commerce (all too much of it, these days, failing or abandoned), but there are also simple little roadside stands selling boiled peanuts, oranges and tomatoes, fresh shrimp and smoked mullet, and two steps off the road one finds quiet, somewhat funky old residential developments or shady trailer parks, and then it is only another two steps to the wild edge of things. Chassahowitzka Wildlife Refuge, Weeki Wachee Preserve, a bird sanctuary between Hudson and Aripeka, little Jenkins Creek between Aripeka and Weeki Wachee—and these are only official acres set aside in our immediate vicinity, not the full story. Farther north are many more parks and preserves, one for almost every spring and river, and here in Aripeka itself, at the forked mouth of Hammock Creek (as at the mouth of the Suwannee River up in Dixie County and at many other spots where fresh water meets salt), necessity dictates that mangroves and tides be left to their own devices. This is their world. It is the world of the herons, the manatee, and all the marine inhabitants whose lives are still a complete mystery to me. 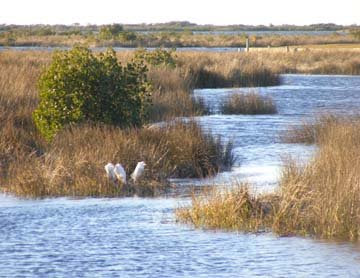 When our friend Gene took us up the Suwannee in his “crick boat” three years ago, we entered trackless wilderness such as existed in Michigan two hundred years ago. Forests fell in Michigan, and farms took their place, but Florida climate and vegetation put up more of a fight. Still, that they have held as much ground as they have, for so long, so much watery wonderland jungle still undrained, is something of a miracle. In recent years, with rising taxes in south Florida, development began moving ever northward, reaching into Hernando County.

Every aspect of life, I like to say, is a double-edged sword. The current hard times have hit especially hard among Florida’s working class. Maybe, I can’t help thinking, the reason they don’t complain more than they do is that they realize that this one evil is holding off another and that the only hope for the survival of wild and semi-wild Florida is some kind of slow-down or reversal in building trends. It often happens, after all, whether in Florida or Michigan or Colorado or elsewhere, that along with loss of wildlife habitat comes loss of affordable housing for people needing to make their living one day at a time. I don’t know. I’m just a visitor, after all. But this half-wild, half-struggling, moss-draped, epiphyite-rich world of clattering palms and constantly shedding live oaks, world of psychic readers and bridge-fishing, of buildings all bright colors on the highway and overtaken by mold and decay if left untended in the shade—this world so different from Michigan (and not much like glamorous south Florida, either) has taken hold of my heart. It is, now that I think of it, parallel to the Michigan I love—near-wild, slightly seedy, rough-around-the-edges Michigan, where every poet has to be a carpenter, too, in order to survive. These are worlds I would not trade for a single gated community. Not that anyone has offered to make me a deal. 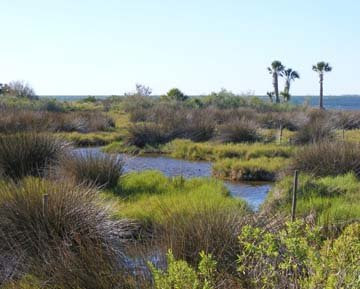 And yes, so far I've posted mostly scenic photographs. For those of you who like your pictures funky, gritty, 'postmodern' or whatever, never fear--those images will appear in time. I'm making a few collections....
Posted by P. J. Grath at 10:24 AM

It sounds like the descriptions in Cross Creek, my first glimpse of Florida. I loved that book. I should dig it out and read it again - bet it's a different book now than when I was an adolescent . . .

I love seeing the herons and egrets in your photos. It reminds me of driving to work in New Orleans and watching the egrets in the canals. It was amazing to see them, deep in mud on those spindly legs, rise from the mud with ease and grace. The egrets allowed me to enjoy beauty in nature amidst the cans and garbage thrown by the road by careless humans.

Gerry, one of the reasons I didn't write more about visiting Marjorie Kinnan Rawlings's house at Cross Creek was the ambivalence I feel toward her. As you note, those were different times, and we were different people when first we encountered the books. Rawlings captured the magic of the environment. Maybe one of the reasons she needed to lose herself in it was the difficulty she had dealing with her own demons and other human beings.

And Deborah, you hit on another important contrast, that between natural beauty and the apparent indifference to it by human beings who live in it. It's obvious that there is no bottle return law here in Florida. Beer bottles, cans, trash everywhere along the roads. Supposedly there is a $500 fine for littering, but I wonder when it was last imposed. I would lower the fine to $50 (what litterer could afford $500, anyway, and then you'd have to send them to jail? makes no sense) and then enforce it like crazy.

If you get to Tarpon Springs again and are looking for some good Greek food, there is a restaurant called Costas, 521 Athens Street - turn left off the main drag, a ways up.

Also, in regard to your thoughts about unspoiled Florida - if you've never read any of his stuff, grab a Carl Hiaasen book or two. He has a lot to say, usually very sardonically, about how people have ruined the Florida he knew.

Thanks for the dining tip, Dawn. We get to Tarpon Springs about once or twice a week--not as often as we get to the library or the new Hernando County dog park, but the Greek scene tugs at us like the moon on the ocean.

I don't know why I haven't read any of Hiassen's books yet. Is it because I was so put off years ago the title SICK PUPPY? You're right, I should give him a try.

I second Dawn's suggestion - Hiaason is a must read.