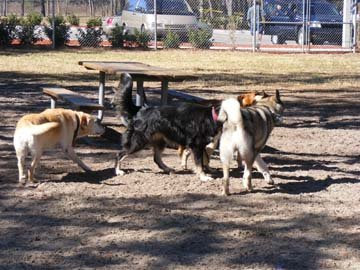 “This is your favorite part of the day, isn’t it?” David teased as we watched Sarah run and wrestle to her heart’s content with Digby, a seven-month-old golden retriever with a 20-lb. advantage over our feisty girl. It does make me happy to see Sarah enjoying herself. David must like it, too, or he wouldn’t suggest—before I even bring it up—going to the dog park at least every other day.

(I didn’t read aloud to David the scary bit in the wonderful book by Kilcommons and Capuzzo, Mutts, where they say of our girl’s mix, Border collie-Australian shepherd, “Are you prepared to take on the responsibility of another very intelligent, very demanding child?” The dog park is saving all our lives this winter, far from the fields of home!)

The park, Hernando County’s first, finally opened in January (just in time for Sarah!), after three years in planning and development. Rotary Club gave it the final needed boost. Not everyone is thrilled as we are (though everyone there gives it raves!), with one disgruntled letter-writer to the Hernando Times fuming about so much money spent on dogs. I think he’s missed the point. The park could have cost a lot less, but along with the fenced enclosures the county decided to provide, on the other side of the parking lot, picnic tables and restrooms for people. Because dog parks are not “just for dogs”—they’re for dogs and people with dogs, just as playgrounds are for children and people with children. And it’s obvious to me that dog owners are benefiting at least as much as dogs from this new opportunity to come together with strangers and get acquainted. Just as the park accommodates dogs of all ages, sizes, breeds and mixes, so all generations of human beings from all possible backgrounds find common ground there. It’s a happy scene. Dogs almost always get along better without the restraint of leashes, and owners give each other training tips and encouragement, sharing and exchanging information, forming friendships alongside their dogs. 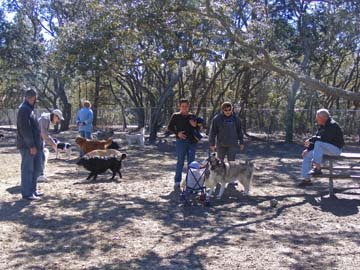 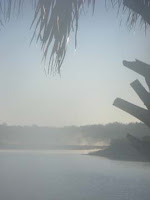 Another of my favorite times of day is any time, morning, afternoon or evening, on the bridge over the South Fork of Hammock Creek. It’s always beautiful, and there’s always something to watch—people fishing, wading birds stalking a meal, or just the tide going in or out. But the North Fork bridge is good, too, especially on a misty morning, and it was in the North Fork that we saw the cruising bottle-nosed dolphins. 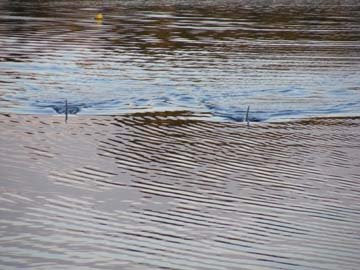 As is probably true elsewhere in the country, good news like the dog park has mostly to do with community action, while bad news comes largely from forces outside community control. So I take heart news out of St. Petersburg (article in the St. Petersburg Times) about a community meeting in Tampa. The group is following “Obama for America” campaign meeting guidelines, and the organizer, Mani Ghansah, who wants to promote conversation and discussion on the president’s economic stimulus package, was quoted as saying, “Just casting a vote and walking away doesn’t work.” The group will forward to the White House ideas coming out of their discussions. Wouldn’t it be a blessing if these economic hard times brought about a rebirth of democratic participation? Are “we the people” realizing at last that we have a stake in the political process and that, to have a say in any important way, we need to pay attention and inform ourselves on how our country is being run? That would be the silver lining in the dark clouds, and there are signs that it’s happening.

President Obama himself came to Fort Myers on Tuesday. Tickets for that “town meeting” were given out free, two per person, first-come, first-served. I wonder how long they lasted! No county in Florida is yet suffering the near 15% unemployment rate of Elkhart, Indiana, but it’s bad here, too, since Florida’s economy runs largely on real estate and the crisis first appeared in the real estate market.

I'm on Chapter 14 of the YA novel (my winter project), and David has started a couple of new paintings, one a large figurative piece. So we are "getting our work done," as a professor of mine said years ago of Nietzsche ("He got his work done") when asked by another student if N. were the professor's role model.

Our bedtime reading has taken on historical dimensions with The Stones of Balazuc, by John Merriman. More about that in a future post. Plus more about dog books. And I'll also have something to say local food and about that miscreant Parnell and the horror he has visited on Georgia agriculture.

I also see that the images in this post are pretty monochromatic, so in closing here's a little more color than nature intended: 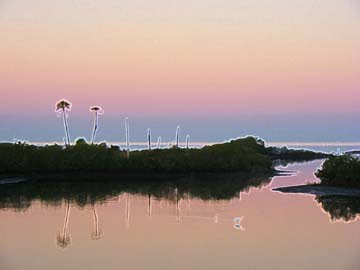 Finally, lest it seem my memory has gone to total mush and that I'm really not in touch with the world around me at all, HAPPY BIRTHDAY, ABE & CHUCK!
Posted by P. J. Grath at 8:57 AM

When I was going door to door campaigning for township trustee I met a woman who was desperate to get the tennis courts in Lake Leelanau converted to a dog park. I don't think that the park in Lake Leelanau is big enough for a dog park, but I did hear that such a project is under consideration at the Veronica Valley site. Write to your county commissioner!

Also, happy 75th to Ed Arnfield, who shares his day with Abe and Chuck.
Also, Pamela, perhaps I missed it, but: Please tell us if these lovely scenes are within steps of your lodging, or miles, or if you must get in the car and drive. If within steps, you are mighty lucky.

Veronica Valley would be a great location and space! I know it's hard for people on vacations to find places for their dogs to run and play.

Anonymous, is that you, Susan A.? I'll have to e-mail birthday greetings to Ed. Soon we'll have to start planning for his and Connie's spring book launch party, too. And yes, most of the wonderful Gulf scenes are ones we see from the bridges over Hammock Creek, since we're on the island between the North and South Forks. Great views, yes?