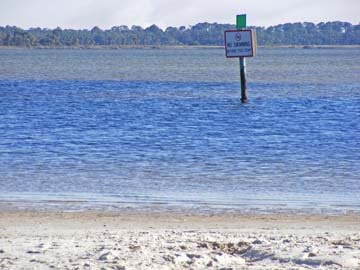 “Do you think there are more psychic readers in Florida than in Michigan?” I asked David one day as we were toolin’ down the road and I was, as is my habit, trying not to miss anything along the way. Not that there aren’t large areas of population in Michigan, but as an Up North resident, I’m used to small towns, light traffic and lots of open space, so my question was kind of a reality check. How would, say, Spring Hill compare to Dearborn?

David’s answer: “There’s more of everything in Florida. There are more people here, for starters. A deputy sheriff in Miami once told me that when anybody goes missing Up North during the winter months, the first place they look for him is Florida.”

I suppose I could look up statistics for population, traffic accidents, crime, employment (and its lack), etc., but it’s the quirky stuff I notice. Besides psychic readers, I note a plethora of nail salons, tattoo parlors, motorcycle dealerships and pet groomers. I wonder how many customers remain, in the economic downturn, for regular professional manicures. Is the call for psychic readings down or up?

Here’s something I began spotting only about a week and a half ago: “In Memoriam” notices stenciled onto the back windows of cars and trucks, usually giving birth and death dates of the dearly departed. The names are not limited to a single ethnic group. Is this a new thing, I ask friends, or is it a Florida thing? Willie doesn't think there is such a thing as a "Florida thing." He says every part of the U.S. is like every other part. I beg to differ! Those of you back in Michigan--what do you say?

There’s definitely more litter in Florida than in Michigan. Sad. The absence of a state bottle-and-can deposit-and-return law is obvious to anyone with eyes open. Why no such law? It would mean jobs, and those who didn’t get official jobs out of it could get something out of collecting the bottles and cans thrown by those too lazy to return them to the store. It’s “nice,” I suppose, that volunteers take responsibility for cleaning up certain stretches of road, but it seems to me there are more important volunteer roles to be filled than unpaid servant to the trash-prone. The ideal scenario would be if residents and visitors alike saw themselves as guardians of Florida’s beauty and never tossed so much as a gum wrapper out their car windows. But I acknowledge that the world runs on motivation, and deposits would motivate returns.

What isn’t there a lot of? I notice the absence of amenities that used to be common, especially in populous areas. This is true across the country, I’m sure, and not unique to Florida, but the thought follows naturally in my mind: “What’s everywhere?” to “What’s missing?” I’m talking about things like pay phones and mailboxes. Cell phones have done in pay phones but what about all those handy, sturdy, blue metal boxes that used to stand on the sidewalks of residential neighborhoods, downtowns and shopping centers--what happened to them, and when did they begin to disappear? One woman I talked to could not remember the name of the Michigan town where her own daughter lives, because they communicate exclusively by cell phone and e-mail. Fortunately, here in little Aripeka we can walk to the post office, and the days we get three pieces of personal, hand-written mail are red-letter days. Jackpot! 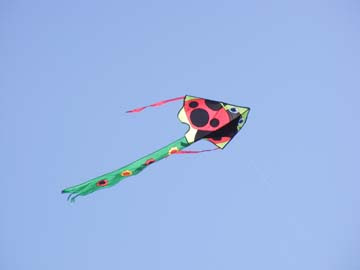 Well, the week began cool and very windy, especially out on Pine Island, where it was much too cold Monday afternoon to read on the beach. Just as well, since I’d suggested to David that the book of short stories I’d just started was one he might enjoy, and so he’d tried and enjoyed it over coffee at Paesano’s Bakery and Deli, while I tried to sketch a nearby table and chairs, so now, if one of us got to read it at the beach, which one would it be? The book is Silent Cruise: A Novella and Stories, by Timothy Taylor, a Canadian writer who seems, in story after story, never to put a stylistic foot wrong. Most of his settings are quirky and off-center, too, and Taylor has done his homework, bringing to each the detailed background knowledge that gives his characters depth and believability. So far he has taken me into the disparate and often not even marginally overlapping worlds of antiques, painting, jazz, an auto junkyard, and fine artisanal cheese-making. Here are a couple of examples from a couple of different stories:


She let the flavours swim through her for a moment. There was clover here, she thought, letting her eyes drift shut. There was the scent of broom and a faint saline back-breeze. Was that earthy undertone the purple vein; she wondered. The flavours carried her aloft, to a point above the farm where all was visible and yet within her grasp. At once vertiginous and exhilarating. One might crash to earth from here or never touch down again. – from “Pope’s Own”


Epoch-shift, I found myself thinking, listening to the heavy words my wife was now saying. An epoch-shift described by the dropping-away of items that characterized the receding epoch. Not like the shift from fauvism to expressionism. Not like the relationship between pop art and its antecedent abstract expressionism. Those had been growths, movements onward. Actions that embraced and accommodated new components within revised versions of an old system.
Not like that. Instead, Gillian opened her mouth and formally ushered us into an epoch of perpetual loss, a transition that could not be observed approaching because it did not bring with it any reference to the post. Nothing swept around the bend to be either admired or loathed in advance. An epoch merely fell away and was replaced by nothing.
“And I had no means to know the hour of its passing. – from “Francisco’s Watch”

But, as I say, it was too windy for reading, so we watched people and birds instead. A couple of little girls, wearing long-sleeved cover-ups over their bathing suits, kept warm by running up and down the shore, their colorful kites soaring high overhead. 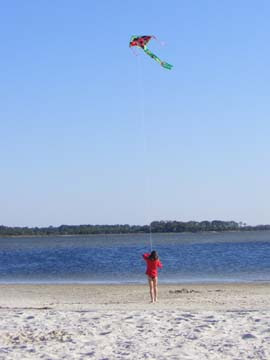 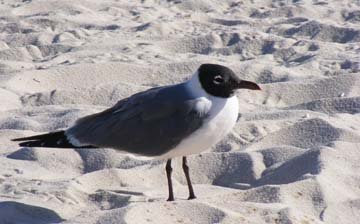 Friday postscript: I finished the Taylor book this morning, and David is three stories in. The title story, “Silent Cruise,” we shared. I read most of it aloud, until a point where that became impossible for me. David then read a few pages to himself, I read those pages to myself, and then I took up reading aloud again we finished it together. With all the other things going on in our life this past week, we were glad to have Taylor with us. The first move I made after arriving at the library today was to seek out his first novel, Stanley Park.

As for what there is more of here than in Michigan, I read in this morning’s newspaper that Florida leads the nation in motorcycle deaths. I’d already noticed there are more white crosses with plastic flowers along the roadsides than we see at home. Obviously, there are more palm trees!
Posted by P. J. Grath at 10:02 AM

Have been enjoying your vacation vicariously despite the deep pleasures of winter here in Michigan. Though I'm a skeptic, the Florida psychics have a special place in my heart since the day in 1990 or so when one said quite earnestly that I was a writer (she had no clue, as far as I could tell), and that my "spirit guide" was Louis L'Amour, who was anxious to channel some stories through me. I gave him every opportunity, but nothing came through.

As always, your observations and insights are an inspiration. You've brought Florida to life for me. Keep it up!

Well so much for the sun shine it is pouring down rain in North Port,FL today! I hope you enjoyed the festivities yesterday! I was searching on google (drawing in North Port Florida) and your blog popped up! Nice to meet you!

Jerry, it's good to hear from you, and I think you do very well guided by your own spirit and don't need that of a dead writer guiding your hand.

The sun is shining again in Herhando County, after yesterday's downpour, but it's quite chilly yet, with today's expected high of only 58 degrees. I know, you guys in Michigan--I know, I know! We'll be back among you by the end of the month, longing for spring along with everyone else!