Musings on Beginning a New Book 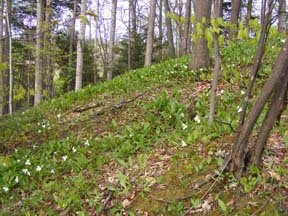 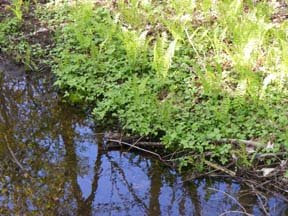 As a child, I had my own tropical island, with magical blossoms that kept death, illness and sorrow away. At times fairies visited, leaving bits of evidence behind. I also had a spaceship, its array of complicated controls occasionally shared with my good pal and official first boyfriend, Jimmy Robert Powers. (Where is he now, I wonder, and do his friends still call him by all three of his names?) The same apple tree (standard size, obviously) that served as island and spaceship could also be an entire jungle as I became a jaguar and slithered among branches that in more prosaic hours served as furniture for hours of reading. Book in one hand, apple in the other, I was lost to chores. The apple tree was, in other words, an entire world, offered by nature to my imagination.

There were other nearby worlds, visible yet invisible to passersby. One was a rectangular piece of ground, small to adult eyes (I realized later), containing a few small trees, some mossy rocks, and a small spring. This secret place was across the road from my house and surrounded by, in alternate years, a field of corn or soybeans. No one else seemed to value it at all, but finding the “world of the infinite in the small” (to borrow the title of that fabulous book about insects by Joanne Lauck) became my specialty early in childhood. This was because I didn’t live in wide-open spaces but in a suburb on the edge of town. The only wide-open spaces were those fields to the west, and beyond them, in my imagination, nothing but the setting sun (which I could see) and the open plains. The truth was that beyond them was a highway and then an orphanage and a shopping center, and later there were more shopping centers and more suburbs, but my secret place was undisturbed until years later, long after I’d gone away. The old farm across the road lasted just long enough for me.

One enormous willow tree, of a size and age young people are tempted to call “ancient,” grew between the houses of two friends in the neighborhood. The boys built a treehouse in its center, but the multiple long, almost horizontal branches were the playground of all the children on the block, and we clambered back and forth on those long boughs and swung from smaller branches like a troupe of monkeys.

The apple tree was not ornamental, the secret place not planned, the sprawling willow untamed by landscapers. We still had plenty of vacant lots when I was a child, too. In the fall we discovered pithy centers in the stalks of dry weeds and considered uses for it. We dared the ice over the “slough” in winter (though we were all forbidden to play in the “slough”), and in spring there were birds’ nests to spy on and sudden floods to swell our geography and turn us into explorers as we followed streams and rivulets that would only exist for a day of two.

This is the kind of outdoor experience that Richard Louv thinks is lost to so many children today. In its place, he says, they have an abstract, mediated, distant relationship with nature. “Increasingly, nature is something to watch, to consume, to wear—to ignore,” he writes in his introduction. “A recent ad depicts a four-wheel-drive SUV racing along a breathtakingly beautiful mountain stream—while in the backseat two children watch a movie on a flip-down video screen, oblivious to the landscape and water beyond the windows.” In retrospect, I can be grateful for an inherited tendency to motion sickness that prevented me from reading in the car, which I otherwise most assuredly would have done (and sometimes tried to do, with disastrous results). Denied that outlet in the pre-seatbelt age, instead I would ride with my head out the window like a dog, my body in the car but my mind roaming whatever natural landscape presented itself.

These days I wear a seatbelt in the car, but I still imagine exploring on foot that wooded ridge, that fast-flowing river, and here at home my explorations are reality. Last night, on the way out the door with puppy Sarah, I tapped the cover of Louv’s book and said to David, “That’s me. Last child in the woods!”

I’ll be in the bookstore for hours today and hope to fine time to explore the pages of LAST CHILD and discover the author’s suggestions for getting more of today’s children away from LED screens and back out into the woods,
Posted by P. J. Grath at 5:39 AM

This really was a delightful blog, Pamela. I felt present with you in your childhood, feeling the magic of it. We had an apple orchard in our backyard and I spent many hours perched in the branches, dreaming and playing. Also there was a cornfield behind the house where corn snakes lived. (I never felt comfortable tere once I heard about the snakes.) We lived on the edge of a small town.

Tom Brown, Jr., says that nature can be found even in the deepest of big cities. He talks about stalking and tracking animals in places like NYC. He talks about how city folk simply often close their eyes to the vibrant nature all around.

I was lucky in that ours was the last street in our particular suburb back when I was growing up, and across the street was a farm. We were outside the city limits. I feel sorry for kids who grow up without vacant lots.

I love THE TRACKER! Also love finding wildness in tiny, jewel-like pockets, as well as in vast tracts.

Thanks for seeking out this little virtual hiding place, Kathy!

Did I ever tell you that I went to Tom Brown Jr.'s wilderness survival school (and then his "Philosophy" class) in New Jersey? Fascinating!

Kathy, you did tell me, and I'd forgotten, but now (since you remind me) I remember the conversation. It was when you visited Northport. I envy you the wilderness survival school experience. The thing I remember best from the book (THE TRACKER) is how to extricate yourself from quicksand. When we're in Grand Marais and hit one of those innocent-looking quicksand areas of the beach, I try to review very quickly his advice. Hmmm. Maybe I should look that up again in the book....