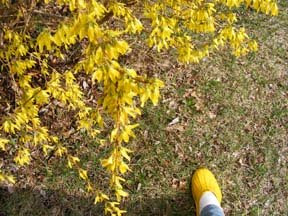 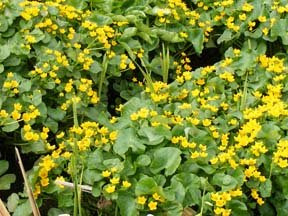 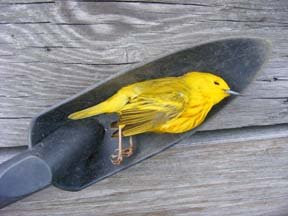 Several days without postings. There was the trip, first, and then a computer hardware problem--home now and solved, respectively. Here then are some seasonal images to make up for the long silence.

When I left Leelanau County for Kalamazoo, forsythia was in full swing Up North, and I found it still going strong on my return. The marsh marigolds (cowslips) had just begun and are now in their glory. What can I say of the poor little goldfinch in the trowel? It flew into one of our porch windows, nevermore to fly, but even in death it was stunning in its perfection. Dandelions are also bright yellow and abundant: David said they quite surprised Sarah the first morning she saw them. The first dandelions of her life!

As for books, I finished both CLARA CALLAN, by Richard B. Wright, and Wole Soyinka’s AKE and have begun LIVING AT THE END OF TIME, by John Hansen Mitchell; THE LAST CHILD IN THE WOODS: SAVING OUR CHILDREN FROM NATURE-DEFICIT DISORDER (which starts off in such a promising tone that I can only guess it was the publisher who came up with the lame subtitle), by Richard Louv; and—for a little fiction--THE RAINS CAME, by Louis Bromfield. Generally speaking, I love Bromfield’s books on farming but not his novels. This novel, however, was the basis of one of my favorite old movies, “The Rains of Ranchipur,” and that makes it irresistible. Travel? Try Ontario, Nigeria, Massachusetts, my own backyard, and faraway India.

What lovely photographs! I'm glad you're back online: I missed your posts and correspondence.

Poor birdie. I saw a bluebird like this once. It is the only bluebird I have seen.

Maiya: I saw Wabasha on your blog. Have you been to Book Cliffs?

It was good to be away, but now it's good to be back. Maiya, have you seen the recent Lake Pepin postings on dmarks' blog? Wishing everyone live bluebirds this glorious, sunny day!

That goldfinch photo is so touching and lovely -- it made me want to cry!

It's funny, I go beserk if a bird is in a building, but I feel so sad when I see a dead one. I guess I have a strange relationship with birds.

In this eloquent and comprehensive work, Louv makes a convincing case for ensuring that children (and adults) maintain access to pristine natural areas, and even, when those are not available, any bit of nature that we can preserve, such as vacant lots. I agree with him 100%. Just as we never really outgrow our need for our parents (and grandparents, brothers, sisters, uncles, aunts, cousins, etc.), humanity has never outgrown, and can never outgrow, our need for the companionship and mutual benefits of other species.

But what strikes me most about this book is how Louv is able, in spite of 310 pages of text, to completely ignore the two most obvious problems with his thesis: (1) We want and need to have contact with other species, but neither we nor Louv bother to ask whether they want to have contact with us! In fact, most species of wildlife obviously do not like having humans around, and can thrive only if we leave them alone! Or they are able tolerate our presence, but only within certain limits. (2) We and Louv never ask what type of contact is appropriate! He includes fishing, hunting, building "forts", farming, ranching, and all other manner of recreation. Clearly, not all contact with nature leads to someone becoming an advocate and protector of wildlife. While one kid may see a beautiful area and decide to protect it, what's to stop another from seeing it and thinking of it as a great place to build a house or create a ski resort? Developers and industrialists must come from somewhere, and they no doubt played in the woods with the future environmentalists!

It is obvious, and not a particularly new idea, that we must experience wilderness in order to appreciate it. But it is equally true, though ("conveniently") never mentioned, that we need to stay out of nature, if the wildlife that live there are to survive. I discuss this issue thoroughly in the essay, "Wildlife Need Habitat Off-Limits to Humans!", at http://home.pacbell.net/mjvande/india3.

It should also be obvious (but apparently isn't) that how we interact with nature determines how we think about it and how we learn to treat it. Remember, children don't learn so much what we tell them, but they learn very well what they see us do. Fishing, building "forts", mountain biking, and even berry-picking teach us that nature exists for us to exploit. Luckily, my fort-building career was cut short by a bee-sting! As I was about to cut down a tree to lay a third layer of logs on my little log cabin in the woods, I took one swing at the trunk with my axe, and immediately got a painful sting (there must have been a bee-hive in the tree) and ran away as fast as I could.

On page 144 Louv quotes Rasheed Salahuddin: "Nature has been taken over by thugs who care absolutely nothing about it. We need to take nature back." Then he titles his next chapter "Where Will Future Stewards of Nature Come From?" Where indeed? While fishing may bring one into contact with natural beauty, that message can be eclipsed by the more salient one that the fish exist to pleasure and feed humans (even if we release them after we catch them). (My fishing career was also short-lived, perhaps because I spent most of the time either waiting for fish that never came, or untangling fishing line.) Mountain bikers claim that they are "nature-lovers" and are "just hikers on wheels". But if you watch one of their helmet-camera videos, it is easy to see that 99.44% of their attention must be devoted to controlling their bike, or they will crash. Children initiated into mountain biking may learn to identify a plant or two, but by far the strongest message they will receive is that the rough treatment of nature is acceptable. It's not!

On page 184 Louv recommends that kids carry cell phones. First of all, cell phones transmit on essentially the same frequency as a microwave oven, and are therefore hazardous to one's health –- especially for children, whose skulls are still relatively thin. Second, there is nothing that will spoil one's experience of nature faster than something that reminds one of the city and the "civilized" world. The last thing one wants while enjoying nature is to be reminded of the world outside. Nothing will ruin a hike or a picnic faster than hearing a radio or the ring of a cell phone, or seeing a headset, cell phone, or mountain bike. I've been enjoying nature for over 60 years, and can't remember a single time when I felt a need for any of these items.

It's clear that we humans need to reduce our impacts on wildlife, if they, and hence we, are to survive. But it is repugnant and arguably inhumane to restrict human access to nature. Therefore, we need to practice minimal-impact recreation (i.e., hiking only), and leave our technology (if we need it at all!) at home. In other words, we need to decrease the quantity of contact with nature, and increase the quality.

Ward, Peter Douglas, The End of Evolution: On Mass Extinctions and the Preservation of Biodiversity. New York: Bantam Books, 1994.

Louv does recognize that kids and parents going out 4-wheeling in the desert aren't going out into "Nature" but hurtling through it. I had some reservations about one of his quotations, someone reading about nature on the porch: when I was a kid, out on the front porch with my "nose in a book," my mother tried to get me outdoors. Wasn't my reading time a "mediated" experience? It's a big topic. Living in the country, with my bookstore in a very small town, I don't see the kids I know as being all that distant from nature, but I can imagine things are as Louv describes in cities and suburban malls. Does Nature need or want us? Probably not. That indifference is part of what appeals to me. I can accept indifference more easily than certain human motives. Not a cell phone owner or user, I was also frecognize my good fortune in growing up free from constraints now imposed on young people as a matter of course. Nostalgia? In part, I'm sure.

Betty, your relationship with birds is similar to that of my husband. If one gets in the woodshed or, God forbid, the porch, I have to "deal with it, and over the years I've become very calm and efficient at guiding birds toward open doors.

Mike, I realize I need to read your fully essay before giving any kind of adequate reply. A lot of problems with my computer in the last couple of weeks have kept my online time to a minimum, with many days of no access, but I do intend to read your essay and then to reply to your comment. Thanks for visiting Books in Northport.