There were a couple of big songs with the title "Day By Day," very different in nature. Sarah Vaughn sings the first one, a love song, here. For the song from “Godspell,” sung by the Fifth Dimension, visit this video.

My own “day by day” life is something else right now: the challenge of another 24 hours without the love of my life but with a challenging little puppy for a companion. If I’d been offered the trade – cute as the puppy is -- I would not have taken it. This is, however, what life has given me, and having Sunny Juliet as companion is better than being all alone. Also, everything is beautiful these days in Leelanau County, orchards full of bloom along nearly every road. “We live in a beautiful place,” the Artist so often remarked. I mustn’t lose sight of that truth. 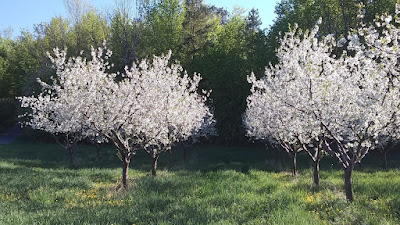 When SJ and I arrived home from our cross-country odyssey a week ago Saturday, and she was introduced to her Michigan house and yard for the first time, the air felt like June, at least. It cooled down to an April kind of evening, but those first spring days back in Leelanau were followed by others that felt way too much like summer. “If May is this warm, what will July be like?” everyone wondered. Kind of worrying.

Then my puppy didn’t feel well the following weekend. (Of course, the weekend! When the vet’s office was closed!) Her little head and tummy felt unnaturally warm, feverish. She was lethargic and had no appetite. That was very worrying! Her behavior and demeanor were so unlike her that I yearned for her usual maddening naughtiness. Please, let my puppy not be sick!

Monday I took her to see the vet, and by that evening, after IV fluids and antibiotics, she was ready for a good dinner. The furnace came on that night, also, and Tuesday morning was so chilly I had to layer up to go outside, with Sunny so much herself again that I could hardly get my socks on, what with her wanting to make a game out of pulling them off my feet before they were all the way on. Cool weather, challenging puppy. Back to normal.

And so we go forward, Sunny and I, day by day.

Last night I finally finished a nonfiction I began reading while still out in Cochise County, Arizona. The Mourner’s Dance: What We Do When People Die, by Katherine Ashenburg, was inspired by research she undertook after her daughter’s fiancé was killed in a road accident, so that, instead of the wedding she had been planning, Hannah found herself participating in a funeral for the young man she had planned to marry. Ashenburg reviews mourning customs around the world and historically in Western culture but comes back again and again to mourning rituals that Hannah devised for herself, since in today’s United States there are no universally prescribed and accepted forms.

At first, I was interested in how naturally Hannah’s homegrown practices had welled up in her, and how similar they were to age-old ways. More and more, as I thought about mourning customs, many of them made psychological sense to me.

This is an unusual book, both personal and general survey, but the two aspects join well. For example, in the chapter entitled “Sad Clothes,” a history of mourning dress (with Queen Victoria centrally featured), the author reports that she asked her daughter --

…if she wished she lived in a world where she could wear a universally understood mourning sytmbol, like an armband, and she said simply, “I would love that.” …Other mourners corroborate Hannah’s feeling. A few months after her father died, the writer Barbara Gowdy was walking down the street, missing him. A stranger in the opposite direction took note of her woebegone face and jokingly ordered, “Smile!” Months later, she was still angry as she remembered the episode: “That never would have happened if I had been able to show by my clothes that I was in mourning.”

Hannah’s personal mourning garb was a “vivid orange vest made of padded parachute silk,” a Christmas gift from her fiancé. My own widow’s weeds are an old, faded t-shirt of the Artist’s, and I also wear his watch and, almost every day, with jeans, one of his belts.

The author mentions more than once that during gatherings of mourners, Hannah was offended by social conversations having nothing to do with Scott, her deceased fiancé. It is all too true that "life goes on" and that people have many personal concerns of their own besides the loss of a friend or acquaintance. But grief is unavoidably self-centered. Regardless of how many friends and relatives I lost prior to losing the love of my life, with the loss of him I felt like -- knowing full well that it was not at all the case -- the first widow in the world and the most deeply bereaved lover of all time. So when someone says helplessly, "I don't know what to say," I am not offended in the least; when they utter stock phrases, such as "I'm sorry for your loss," I appreciate the effort; and any time someone has a story or a personal reflection on my husband to share with me, I am grateful. When no reference is made to his death, however, I feel as Hannah did, resentful and aggrieved. One world has vanished, and another, left behind, has been shattered. How can that be ignored? 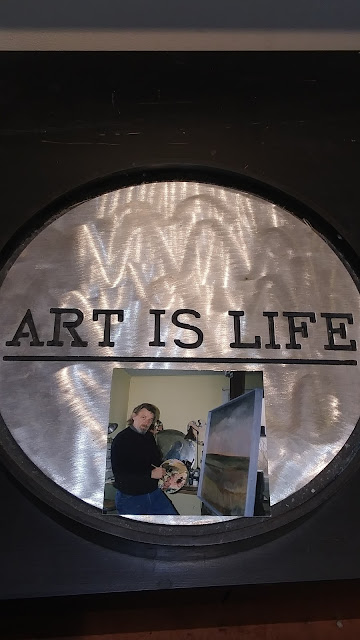 Another nonfiction book I read in the past week concerned the last days of the author Marcel Proust. Proust at the Majestic: The Last Days of the Author Whose Book Changed Paris, by Richard Davenport-Hines, started off slowly for me, with far too many facts and names crammed into the first chapter, and there were many repetitions through the work, but it held my interest and kept me company and lulled me to sleep for my first week back in Michigan. The detailed report would be meaningless to anyone not familiar with Proust’s work, but for those in love with A la recherche du temps perdu it is fascinating to see the concentrated effort needed for the writer to finish his work, as well as to learn that all Paris, from titled nobility to cab drivers, came to a shocked standstill when they heard of his death.

I was only home a week before the cherry orchards burst into full bloom, along with all the wild cherries, and now my little apple trees, too, are flowering, and I find myself telling Sunny frequently what David so often exclaimed to me, “We live in a beautiful place.” I imagine Sunny appreciating the landscape with her nose, taking deep draughts of orchard tree and dandelion perfume. Lilacs will open soon. Orioles are passing through! (See more blooms here.) 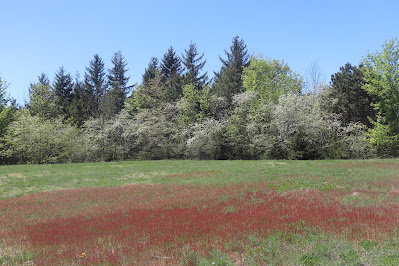 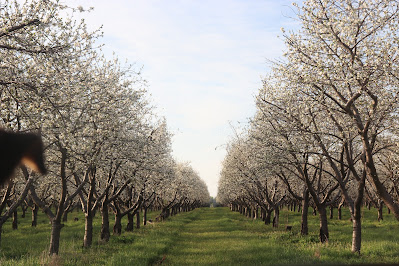 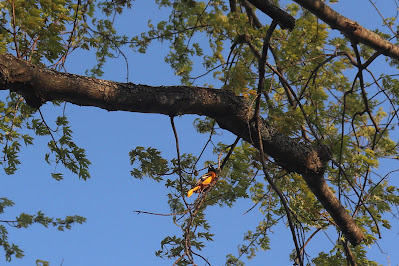 And I will be opening the bookstore soon, though "regular" hours may be elusive for a few more weeks, as my life remains in disarray, regardless of how many tasks I check off the list of things to do. 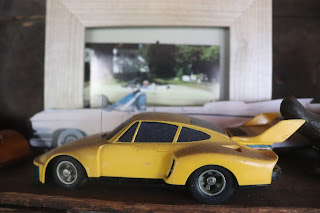 I love your posts, Pamela, so unblinking and honest. Thank you for sharing with us. Your photos are beautiful, too. Been thinking of you.

Lovely piece, Pamela. I'm so glad Sunny Juliet is back to normal.

Thank you both for your support and encouragement. SJ is better than normal, as of last night and this morning, because her dog mom (ahem!) is being more patient and encouraging with her! We begin work with a trainer today, too.