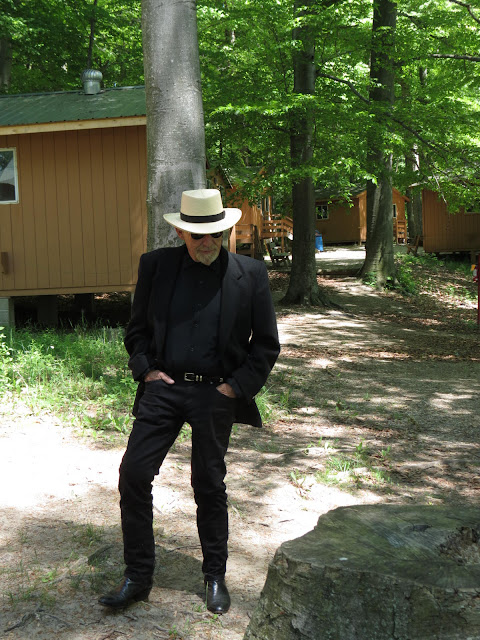 I have not blogged since my husband, the Artist, died, but have been writing and just can’t seem to stop most days. As I look through old digital photo files on my laptop, memories have washed over me in waves, and sometimes I posted only images on Facebook, but other times I put together a themed group and a paragraph of the thoughts that group of images gave me. “Keep writing,” a few friends said in their comments. Saying that to me is kind of like saying “Keep breathing” or “Keep remembering.” One dear friend of mine said in an e-mail that I may be a graphomaiac. Can’t help writing. But blogging? That’s been tough even to think about.

So while I’m not ready to come up with a new blog post, here are some memories and a few, though not all, of the photos that have turned up along the way and found their way to my friends on Facebook, with a few small changes here and there and once in a while an amplification. It’s the best I can do right now. 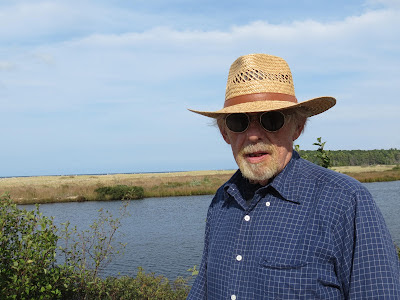 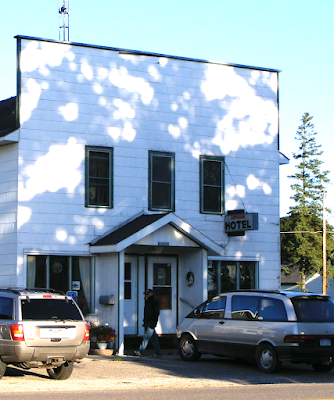 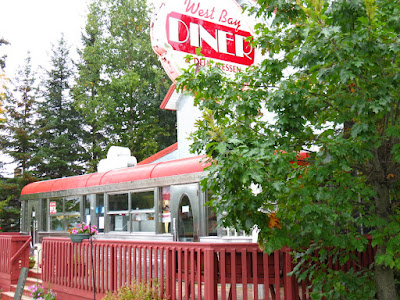 Above: Grand Marais, Michigan, in the Upper Peninsula, was to us what Leelanau County is to annual visitors from, say, Grand Rapids. It was our home away from home, a place where we didn't work but went every year to catch our breaths again after a fast-paced summer of work, to breathe deeply, and to revisit old haunts and friends, not needing anything fancy, only to immerse ourselves in the dear and familiar: the Superior Hotel (Room 11), the West Bay Diner, the agate beach, Coast Guard Point, the Sucker River flowing cold into even colder Lake Superior, the serenity of the harbor, and boats, boats, boats. We walked the shore and the alleys and were always happy there, doing almost nothing after a busy tourist summer in Northport. 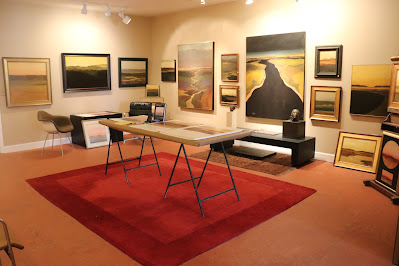 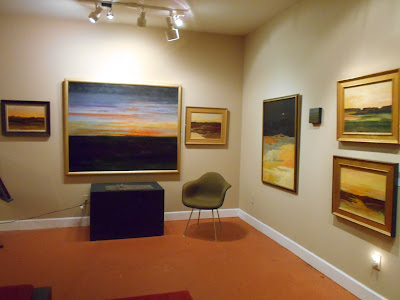 Above: In Northport, at any season of the year, David was always rearranging his gallery space. It was one of the constant joys of his life. The big red rug, lights over the paintings, the guest book presided over by a rubber rat bought at David Chrobak's shop, and other treasures on display were all David Grath.

Below: Over the years, many friends visited and spent hours talking and laughing, and often if I wandered in David would say, "Take a picture of us." His friends were his treasures, also. 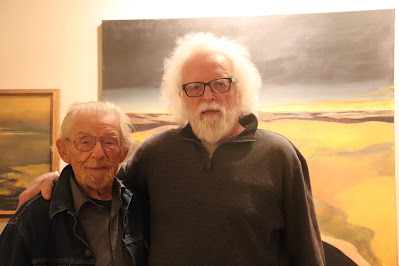 Another Northport artist, Bonnie Marris, sent me a couple of old digital photos from her archives. I know they were taken in the yard at our farmhouse because I recognize the blue and yellow tablecloth bought at an outdoor market in France when David and I were there in September of 2000. We had started out in Paris, of course, where we stayed at the Hotel Recamier, and then after a week or so we took the TGV (le Train de Grande Vitesse) south to Avignon, from which point we drove back north in a tiny rental car, traveling without reservations, as the spirit moved us. After a flat tire in the rain, we ditched the car in Fontainebleau and caught a train back to Paris, happy to be in familiar surroundings with great public transportation. But except for that flat tire day, the drive north from Avignon was heavenly, most especially the evening, night and morning we spent in Blesle, one of the (officially) prettiest villages in France and, to me, the French version of Glocca Morra, an almost unreal place of beautiful dreams. 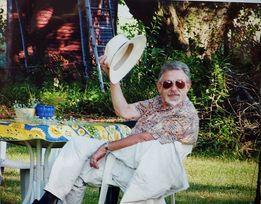 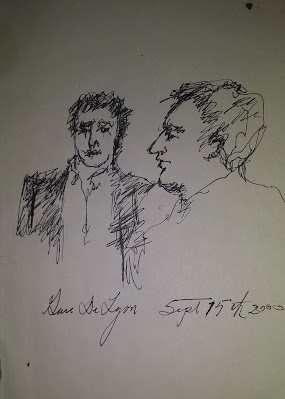 To many friends and even oftener to people who didn't know all the aspects of his personality, David was known as a "car guy," and he certainly loved these big showboats -- besides the Lincolns, a beautiful yellow Cadillac that had belonged to another dear late friend. In 1986 David wrote an article called "86 Cars" for Automobile magazine and was a featured guest on the television "Today" show. When a crew came to Leelanau County to interview him and film the show, his houseboat on the Leland River made that show, as did the view looking north on Setterbo Road towards St. Wenceslaus church. 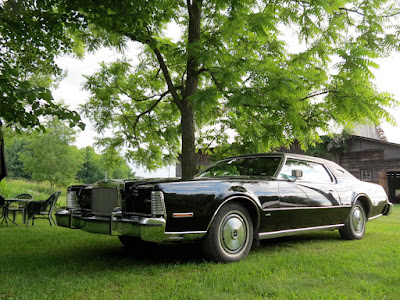 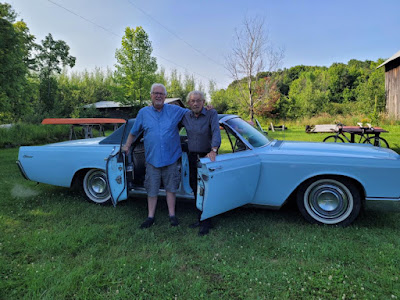 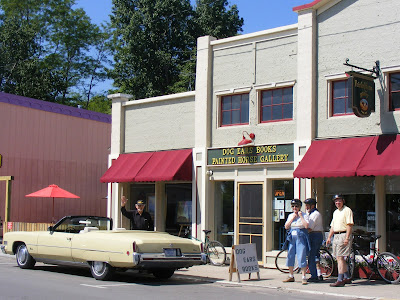 Back when Sarah was a young dog and Donny's dogs Weiser and Ida often came to spend the night (Donny, brother of David’s dear friend Michael, had lived in the house until his death, when Michael made it available to us for a few winter months), David loved his roomy studio space in Aripeka, Florida. From Aripeka we also enjoyed water adventures with with other members of the Seuss family, and David treasured his morning coffee times at Carl Norfleet’s store by the island’s north bridge. 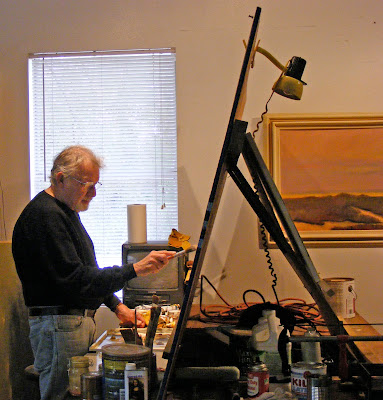 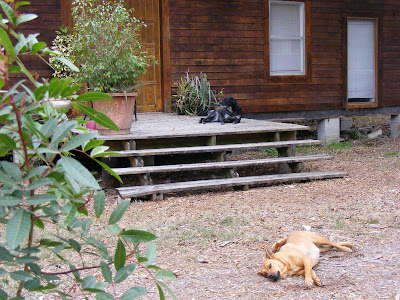 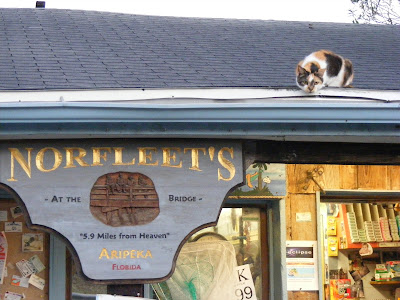 Always messing about in boats (his own or other people's) or designing them or dreaming of them (because David always was a dreamer, as one of his grade-school teachers wrote to his parents on a long-ago report card), the Artist was very much the Rat of Wind in the Willows legend. Not surprisingly, that classic was one of our household’s all-time favorites. 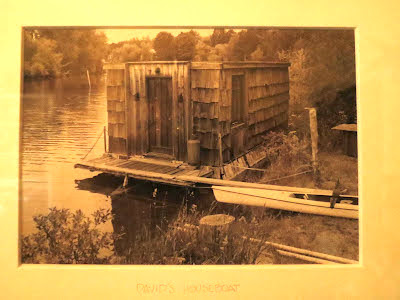 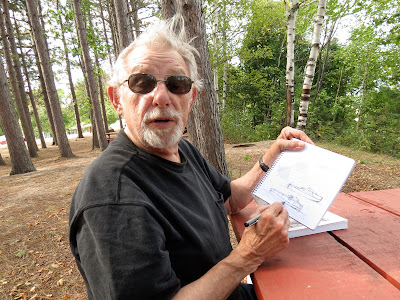 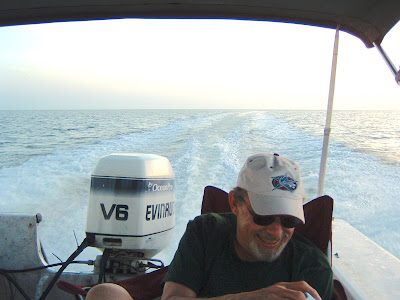 Beginning in 1993, we were always a pack of three except for short stretches between dogs. On one trip to Florida, we were exploring Plains, Georgia, and, feeling as if our poor old Nikki might not make it any farther down the road, we asked a pleasant young policewoman to take a family picture of us. Nikki rallied, and we had her for much longer, in Florida and back in Michigan. Sarah was the dog of our life, the practically perfect puppy we adopted at four months and the charming hostess at Dog Ears Books for years. She was as happy with us on the road and in Florida and in the Arizona desert as she was in Michigan, summer and winter. Queen of the Snow! David and I loved our nightly pack times with her -- and also with Peasy, the dog we had for only 13 months.

I'm so sorry David never had a chance to meet Sunny, the puppy he had me purchase with cash he’d set aside for an Italian motorcycle (before coming to his senses), but when my sister and I went to the coffee house in Willcox -- a place David loved! -- the owner recalled the day I went to see Sunny, up north of Tucson, for the first time and put down a deposit on her. David drove into Willcox that day and visited the coffee house and told everyone at Source of Coffee about the puppy we were getting! He looked forward to us being a pack of three again (and she already has the makings of a good traveler). David was looking forward to so much -- making sculpture again, seeing friends in Michigan, making another trip to Minnesota to see children and grandchildren there. He lived right up to the end, and what more can we ask? Just more time, I guess, but sooner or later time runs out…. 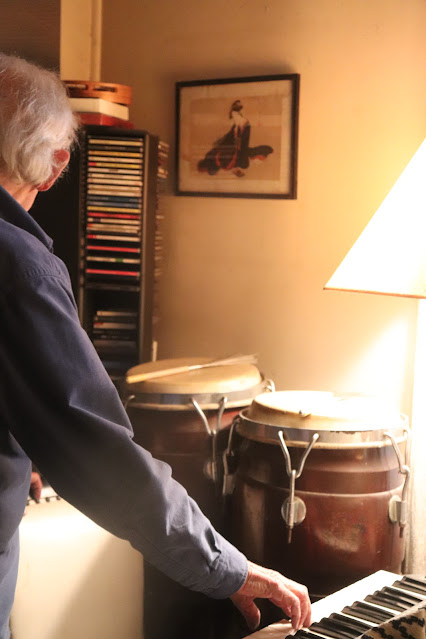 David Grath loved music, listening to it and making it. Playing bongos with Newt and the Salamanders was a favorite in his memory chest, and in his last weeks of life (though we didn’t know they were the last) he couldn’t resist a cello found at a thrift shop. He loved books, an incurable addiction we shared, and so he loved my bookstore, too, opened when our combined collections threatened to crowd us out of house and home, the bookstore that became, like his gallery and studio, a place for us to welcome friends old and new over the years. He loved beautiful things. Objets de virtue. And old soulful things of all kinds. He loved handsome shoes (especially Italian), beautiful hats, Harris tweed sport coats, leather bags, and cowboy boots (all things leather). He liked looking good. Especially, above all else, he loved painting. He looked at the world as a painter, always. And — my great good fortune — he loved me, and our life was rich and full. 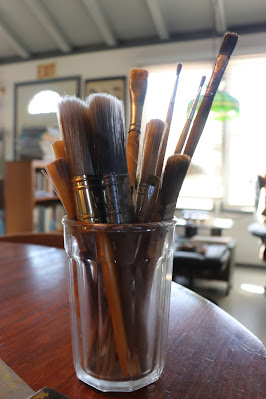 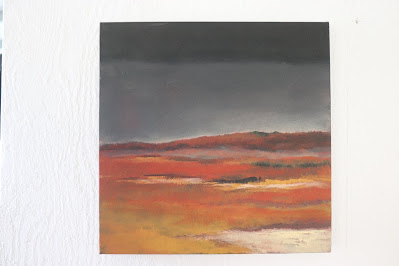 One dear friend (who perhaps has not known me long enough to identify me as a graphomaniac) asked how I can write about losing this dear man when my grief is so new, but it's how I live -- by writing. It's how I think and sort myself out. And looking through my old photos reinforces my deep, strong gratitude for the life we shared for so many years. It's when I'm not writing or talking about David or looking at his paintings or my photographs of him and his paintings that the loss is unbearable. 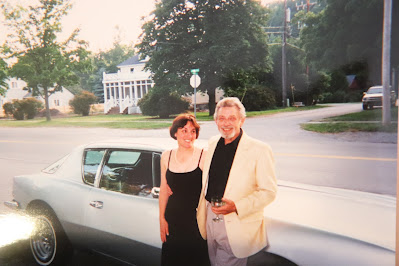 But here is a lovely story from a friend back in Leelanau County. He said that one recent cold day in Michigan, cold but very bright and sunny, he was sitting in his living room, sunlight pouring in through the windows, looking at Grath paintings on the wall (he owns several), and "Umbrous Pond" was glowing in the light. "It just glowed." That was in the afternoon, and only later, in the evening, did Tom learn that his artist friend David had died. But what would have given David more joy than to know that someone was looking at and loving one of his paintings? It was the best thing I heard all day. 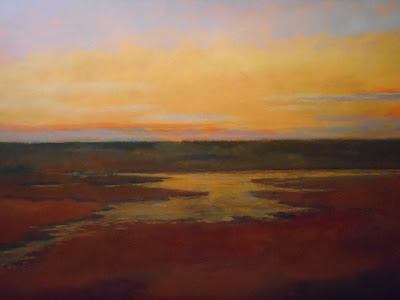 Grief is so personal. Everyone has to do it her own way. You seem to be having your process through writing, looking at pictures, reminiscing. Thank you for sharing some of that in this "non-blog blog post." It helps those of us who care to know what and how you're doing. And for those of us that didn't know David well, your stories and photos are wonderful. Thank you. Take care, Pamela. Hugs to that beautiful pup too.

What beautiful memories, and with pictures, we see how your life was. This helps us to see how you are doing, and to understand your life together. There were so many different places and parts of your lives, so it is just heartwarming to have you share this with us. Thank you, dear Pamela. It makes me cry but I love to see the love.