Thursday was the second grey morning in a row. My phone said the temperature was – oh, I forget, but the “feels like” number was several digits lower. It’s September but “feels like” November, I thought to myself. Dogs, meanwhile, while most are not crazy about being out in the rain (some don’t care) do not seem affected at all by gloomy skies. A dog is a good companion on a gloomy day, for that very reason. Happy, happy, happy! On the other hand, without the dog, I wouldn’t have to be out there at all! Oh, but I need the exercise, too. But couldn’t I do yoga on a mat indoors? But the fresh air is all outside. Round and round and round…. Stop thinking about it! Look for mushrooms!

And then, back to the house, glancing at my colorful annuals and perennials on the way to the door.

Thursday evening would be reading circle, and we would be discussing a book I had chosen but read way back in July. I’d started looking at it again (no time to re-read the whole novel) and making some notes, but after the cold, windy, spitting-rain a.m. constitutional, I simply opened at random and began to read. The character on the page is Louis, and, having signed his name already 20 times on letters and papers of business, he is feeling clear-minded and singular, but his singularity in this moment, as always, contains multitudes.

“The sun shines from a clear sky. But twelve o’clock brings neither rain nor sunshine. It is the hour when Miss Johnson brings me my letters in a wire tray. Upon these white sheets I indent my name. The whisper of leaves, water running down gutters, green depths flecked with dahlias or zinnias; I, now a duke, now Plato, companion of Socrates; the tramp of dark men and yellow men migrating east, west, north and south; the eternal procession, women going with attaché cases down the Strand as they went once with pitchers to the Nile; all the furled and close-packed leaves of my many-folded life are now summed in my name; now upright standing in sun or rain, I must drop heavy as a hatchet and cut the oak with my sheer weight; for if I deviate, glancing this way, or that way, I shall fall like show and be wasted.”

Bernard makes his phrases not for pages but for company. He makes them to utter aloud, while restless Jinny sees and smells and hears and feels the world about her constantly, living more in her body than any of the others, and Neville awaits a lover whom he will replace when the lover ceases to come to him, and Susan’s life has become an enclosed life of interiors:

Rhode’s affair with Louis will not save her from feeling even more an outsider than he, the Australian, feels among the English, her own people. She hates her fellow countrymen.

“…I have been stained by you and corrupted. You smelt so unpleasant, too, lining up outside doors to buy tickets. All were dressed in indeterminate shades of grey and brown, never even a blue feather pinned to a hat. None had the courage to be one thing rather than another. What dissolution of the soul you demanded in order to get through one day, what lies, bowings, scrapings, fluency and servility!”

She sees herself as “corrupted” because Rhode too covers her “sneers and yawns,” tells her lies, and copies the expressions and actions of others so as not to stand out.

And behind them all, always, is Percival, the golden athlete, who died far from home, never to return.

What seem to be speeches, the paragraphs in quotation marks, are thoughts and feelings of the six characters (Percival excepted, as he only appears in the hearts and minds of the six) as articulated and transformed into lyric poetry by the author, and as I read I see and hear the scenes as if watching a movie but am also carried along by the rhythm and music of the words and phrases and lines of poetic prose. And although I know (I remember) that Rhoda will commit suicide, that Bernard will never write a book, that Neville will not find another love like the love he felt for Percival, that Susan will slip deeper and deeper into a complacent, bovine existence, and that Jinny will suffer from the effects of aging on her beautiful body, somehow the moments and hours of their lives, and the details of their days as Woof captures and presents them, are so fully formed and filled with beauty that the effect on – well, this reader, anyway, is as calming as a forest ramble or a stroll along the water’s edge with the rhymical waves coming in and retreating, over and over, each one perfect. Dipping into this book is like dipping into Proust or Whitman. Anywhere is good. Every page is a jewel.

With a book such as this for a cold and cloudy day companion, let it rain! I’m just fine. 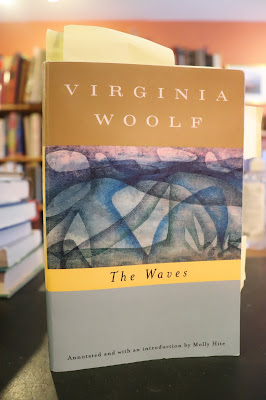 128. McKenna, Martin. The Boy Who Talked to Dogs (nonfiction)

Thank you for this review of Virginia Woolf’s The Waves! It does sound like poetry, and the rhythm of the lines has a real musical feel. Time for a dip in those waves. Your list at the end has several books that sound intriguing.
Here in Brooklyn we are getting those ‘hints of fall’ finally, and they are welcome, like long walks in Prospect Park and sitting and reading on our terrace. Not so hot..!

Jeanie, I read your comment on the other post first and finished off hoping you were having a good beginning to fall -- and now I see you are, and it sounds lovely. I highly recommend THE WAVES! As for the rest of the books in that little list, THE MIDNIGHT LIBRARY isn't great literature but worth reading; THE BOY WHO TALKED TO DOGS, again, isn't the most inspiring writing in the world, but you can learn a LOT about dogs in that book; THE BEAUTY IN BREAKING is written by a black woman physician who is also a wonderful writer and has important insights to share; IN A FRENCH KITCHEN will make your mouth water and inspire you to experiment in your own kitchen, though the author's kitchen is equipped beyond what most of us have or even feel we need!

Hah! I WAS wondering about the stories behind the food in the French cooking book! I like to try new things, so I might get into that book in order to choose what I can cook here in my apartment-sized kitchen!
THE WAVES is a must-read! Poetry in motion!
Oooooo - I loved your aster pictures and the other day while Antonio was in Mass playing soccer with his Olde Buddies, I went for a long walk in Prospect Park…et, Voila ! Asters on the way out! They perk up a spot like nothing else!
OH! I appreciate your comments about not always finishing a book. I often feel guilty if I don’t, but then, I usually just can’t get past those 50-60 pages: Ugh, no MORE! If you can be picky, you mega-reader-and-reviewer, heehee, then I can be picky, too!! Ahhh.

Jeanie, this exchange is a perfect example of why you and I never run out of conversation topics! Love that you love THE WAVES ... and that you saw asters in Brooklyn ... and might try some French recipes and/but don't always finish every book you start.

Does everyone in Brooklyn go pumpkin-crazy in the fall? I can't go for a pumpkin latte but am enjoying a pumpkin and cream cheese muffin right this very minute. Apples and pumpkins all over the county, under clear, bright sunny skies....