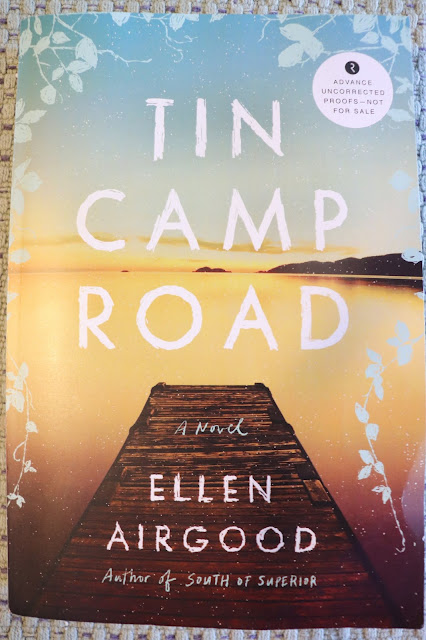 If someone recommended a novel about a young single mother living in poverty, making a precarious living by cleaning motel rooms, dressing herself and her daughter in used clothing bought in thrift stores, their lives suddenly threatened by eviction and homelessness, what else would you expect of the story? Would you anticipate a “gritty” urban setting? Characters living on fast food burgers and fries? A mother ground down by the hopelessness of her situation? I’m betting you wouldn’t anticipate a rabbit hunt or a beach fire with marshmallows under the Perseid meteor showers on a Lake Superior beach. Author Ellen Airgood’s novels, however, are full of the quietly unusual and unanticipated.

Airgood's first novel, South of Superior, was published by Riverhead Books in 2011, followed by two middle-grade novels, Prairie Evers and The Education of Ivy Blake. Like many of Airgood’s fans, I have read all three more than once, and while I enjoyed the fiction for young people (the stories about Prairie and her friend Ivy), at the same time I longed for another novel set in the Upper Peninsula of Michigan featuring adult characters. Now we have that second U.P. novel at last. Tin Camp Road is scheduled for release in August of this year, and those who loved South of Superior will not be disappointed by Tin Camp Road.

All of Airgood’s fiction, whether for adults or young people, shares a committed attention to the "messy" (her word) lives of ordinary people. That human beings must deal with the unexpected is not Airgood’s exclusive discovery, of course, but her particular presentation of “the plans of mice and men gang aft a-gley” is all her own.

Whether you realize it or not, you probably know someone with experiences similar to those of the character Laurel Hill. Maybe you’ve been there yourself. So much of our lives' confusion and its complications is hidden from public view, if hiding is possible. In this novel, we see secrets not revealed in shocking cinematic flashbacks or tidy Freudian explanations, just as simple facts of life.

Publishers, however, are no doubt reluctant to describe any book as “quiet,” afraid that potential buyers will interpret that to mean boring. Thus the publisher’s blurb on the back cover of the advance reader’s copy of Tin Camp Road describes Laurel’s relation with her daughter by saying they are “each other’s everything,” with subsequent phrases such as include “dangerous incident,” “hardscrabble life,” and “embrace the wild.” In my opinion, the publisher’s description makes the story sound more melodramatic and less satisfying real than it is. I am grateful to Riverhead Books for publishing Airgood’s novels, and I understand the motivation behind the hyped-up description: fiction is fiction, and advertising is advertising, and the latter can never deliver what only reading a novel can offer. Still….

Can any parent and child be “everything” to one another? Before the unplanned pregnancy that brought Skye into her life, Laurel’s chief passion was running. When we meet her at the beginning of the novel, she has not indulged that passion for years. In the hands of most fiction writers, a passion long given up and eventually reclaimed by a main character would be showcased as the story's heart. Similarly, certain troubling behavior her teacher sees in Skye when her life is disrupted would usually be presented in more heightened emotional terms as another seemingly unconquerable crisis. But melodrama is not Airgood’s way. Quietly and simply, she surprises us again and again.

As a friend of mine who grew up in a northern Michigan small town put it admiringly after reading South of Superior, “She knows the life!”

Yes, this author knows the intimate familiarity of small towns, the unremitting struggle for survival, the deep love for these rural “flyover” places, and she gives it to us in its equally stark beauty and challenges, in the ordinary hues and tones of passing days and seasons. At several points in the novel, we think we know where Laurel will jump next, but we are usually wrong. Nothing feels inevitable in Tin Camp Road. Laurel Hill’s life does not get tied up in a neat bow on the last page, laid out once and for all. If you want a fast-paced, tightly plotted story with lots of action involving glamorous characters, look elsewhere. Airgood gives us something much richer. She gives us real life, characters we see and feel as real people, people we care about, with possibilities and choices that might have been, as Jane Kenyon’s wonderful poem tells us, otherwise. But in this case, they were not otherwise. They are as they are.

At a certain point in my own life, I remember realizing that I was not traveling some clear path to a distant goal but making things up as I went along. “It’s the ‘revisable life,’” I wrote to a friend. That, I think, is the life most of us live. It is Laurel Hill’s life in Tin Camp Road, and I am eager to turn back to the first page and read her story over again, beginning today.

A great review and reason to read this book. I think it's the quiet moment in a good read that captures me the most. The Blue Jay's Dance by Louise Erdich is still my favorite book to read anually for that very reason.

Yes, Alexis, these are the books I re-read, too. I've probably read SOUTH OF SUPERIOR half a dozen times. Somehow it encourages me -- literally, gives me courage -- when life feels overwhelming.

I can't wait to read it. I will definitely order it from you when we're headed into August. I'll be up in the Thumb during this year's meteor showers in August, hoping to capture some of the magic. You never know, right?

Dawn, it is a real treat to have another book from Ellen Airgood. As for your August meteor plans, your photography is getting better and better all the time. You could go pro one of these days, and I wouldn't be surprised.