Winter and Spring Collide on Saturday Morning in March

Morning begins with Peasy. Although he and I are early risers, one of my daily objectives is to have a couple cups of coffee without an exuberant young dog tearing around the cabin with a noisy squeaky toy, and to this end I line up little treats at the edge of the table where I’m sitting and give Pease the command to lie down and stay. Sometimes he cooperates right away, and other times he doesn’t feel like it and tests me, popping up again and again. He was a popper-up this morning. So I took him outdoors on the leash and we ran through a series of commands in the cold wind. Back inside after the lesson, he was ready to settle down quietly at my feet, bribed by a treat every ten minutes or so. Good enough.

This little dog has learned a lot in a few weeks. He knew nothing when we brought him home, other than to charge his meal dish the minute it touched the floor. Now he will sit, lie down, stay, and wait – whatever I tell him to do – and as I walk around the room to give him extra time for reflection, his eyes are on me, not on his food, as he looks to me for permission to go to the dish.

After my coffee and Peasy’s breakfast, all of this stretched out over an hour or more, I walked down to the mailboxes on the highway with Peasy on a leash. He was a good boy and didn’t pull. Back in our yard, I wanted him to run through a few more commands while on-leash, but he didn’t feel like it, and I had to insist. When I didn’t give in to his naughtiness, he bowed to the inevitable, doing a very nice lie-down-and-stay (leash attached to collar but lying loose on the ground) until I called him to me from a distance, whereupon he came directly to sit in front of me and wait for whatever was going to come next. Good dog! After I told him how good he was and showered him with affection, I took off the leash and had him sit politely one last time – then gave him permission to run!

It was a good dog morning. I wish Peasy were as comfortable in public as he is with me in private, but that may not be within his power or mine.

Before we were back in the cabin, the first snowflakes were in the air, and the snow came thicker and heavier for quite some time. I am concerned for flowering fruit trees in my neighbors’ yards. Moisture for the land is good, though. In fact, as long as we were going to have cold winds and snow, I wouldn’t have minded a lot more snow. My own little garden is portable, and I’ve been bringing it in every night. Today it will probably be spending the whole day indoors. 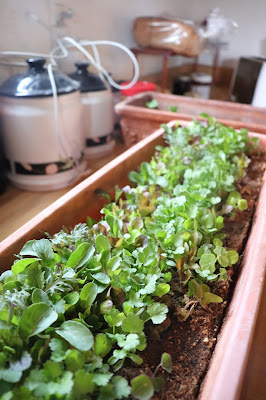 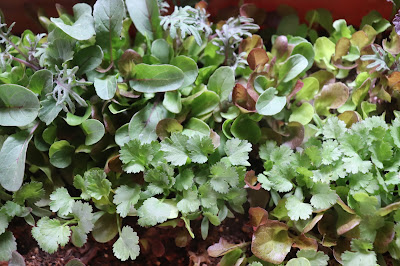 The Artist has his coffee now and is listening to NPR. The dog has settled down to think about what he did right this morning and where he has room for improvement. (Yeah, right!) My lettuce and cilantro seedlings are safe from killing cold, and I have leisure to clear away clutter and reorganize the books in my private Arizona library (ARCs on desk). 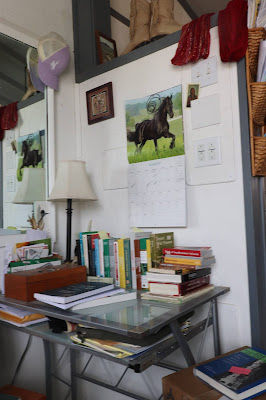 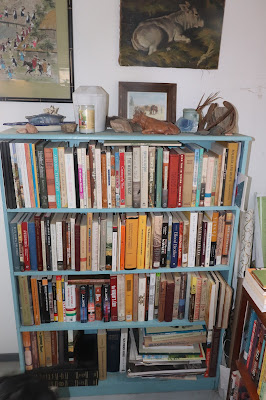 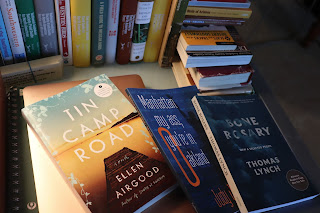 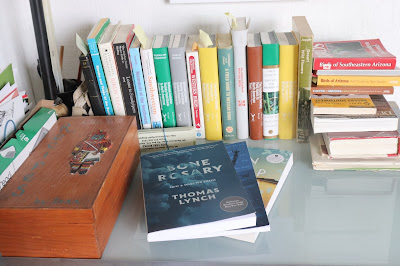 Impossible for a book person to rearrange books on shelves and not open one to dip into its pages!

…This is the other side of the coin from the rest of my life, from doors and walls and movie screens. This is the place that does not belong to humans. Animals have scuffed the ground, shat upon it, cleared twigs out of the way, folded down grass in their sleeping. They are talking, leaving messages written in scents on leaves and tree bark, whistling to one another, hearing voices in the distance.

-      Craig Childs, The Animal Dialogues: Uncommon Encounters in the Wild

Books are essential to my life, but so is the freedom to ramble outdoors on a daily basis. A book like The Animal Dialogues pleases me because it takes me, in memory and imagination, back outdoors where I was so recently and will be again. 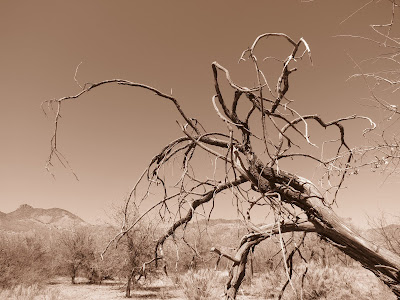 I think the outdoors, in most weather, is a great healer. You're lucky, in both locations where you live, to have wonderful spaces outside.

That is for sure, Dawn!