Books in the Car

Over the weekend, although we traveled no farther from the than Willcox (14 miles north-northwest), the Artist and I had, as always, books in the car. I set out Saturday morning with The Animal Dialogues: Uncommon Encounters in the Wild, by Craig Childs, only a few pages left unread. The Artist had two or three books with him, but having begun Steinbeck’s Of Mice and Men (not for the first time but for the first time in many years), he stuck to it faithfully from beginning to end, knowing that his other car reading selections, books that could be picked up at any time and opened anywhere, would wait patiently as long as necessary. 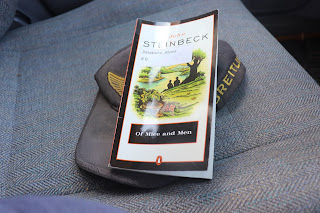 Already, however, I have so far glossed over the “books in the car” story as it unfolded on Saturday.

You see, I was picked up by a neighbor and carried my book with me in a bag, while the Artist drove to town separately to be about his own business while I was meeting with a group of “ghost town ladies” (my name for the group; they refer to themselves as “the riff-raff”) for lunch, our first gathering in over a year. What fun! It didn’t matter that our orders took a while to arrive, because we had plenty to ask of and say to one another, and when a call came on my phone from the Artist as we were lingering over our checks, there was still no hurry, but it was agreed that Edna would eventually drop me off at the Friendly Bookstore, where David and I would rendez-vous and ride home together.

Full disclosure: There was a big book sale going on at the Friendly!Although prices were dirt cheap, we exercised massive self-restraint -- and only filled a single box to load into the back of the car! One slim paperback I kept out of the box, a book to follow that of Craig Childs (so soon to be finished), was Wendell Berry’s Life Is a Miracle. 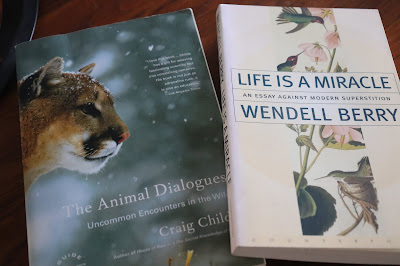 Berry’s subtitle to this small volume, published in the year 2000 and still pertinent and not widely enough read today, is An Essay Against Modern Superstition. Perhaps (and I say this in full recognition of the fact that making a big splash is not Wendell Berry’s way of being in the world) the book would have made a bigger splash, garnered more media attention, had the subtitle read: An Essay Against E. O. Wilson’s ‘Consilience’ – because while Wilson is not the only target of Berry’s criticism, Wilson’s notion of what he calls ‘consilience’ and his advocacy for it give a sharp focus to Berry’s larger criticisms of a materialist culture that values market efficiency over all else. And that’s fine with me, both the general and the more specific “against” targets, as I find arguments for materialism self-defeating and have always found Wilson’s know-it-all posturing annoying in the extreme.

Wilson’s book, Consilience: The Unity of Knowledge, makes an argument. In roughly 150 pages, Berry carefully analyzes the argument to lay bare its contradictions and basic incoherence. Wilson knows a lot about ants, but he falls dismally short as a philosopher (shoemaker should have stuck to his last), and I confess to a devilish delight at Berry’s skewering of Wilson’s straw man argument:

In his chapter on “Ethics and Religion,” he has “constructed a debate” between “the transcendentalist” (a straw man) and “the empiricist” (a stuffed shirt).

- Wendell Berry on E.O. Wilson in Life Is a Miracle

Touche! Berry’s well-aimed arrow here is only an opening salvo in his lengthy and detailed critique, which I will not review in its entirety but urge you to read for yourself in Life Is a Miracle, particularly if you consider yourself an admirer of or apostle for E.O. Wilson’s “unity of knowledge.”

My delight in other pages was more generous, delight not only in Berry's ideas and statements, but recognizing that he and I share admiration for other writers. Encountering a quotation from Stephanie Mills, a writer from back home in Leelanau County, Michigan, someone we know personally, made me happy, as did a paragraph on the work of Jean-Henri Fabre, “the Homer of the insects” -- and one of my favorite nature writers.

Maybe you would have preferred a photograph or two of the new stacks of books that made their way from sale tables to back of car to shelves and stacks in our ghost town cabin? I’m sure one or two of them will find their way into this blog in future posts. One, I’ll just hint, was about horses….

For now, as the Artist has read the last page of his Steinbeck, closing the book with a great sigh of satisfaction, I’m wondering -- will one of his next car books be Cannery Row? I’ll leave that one on top of the stack on the little table between our reading chairs and see if it gets picked up and carried along in the next day or two. 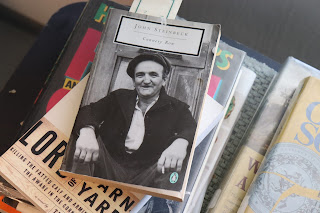