Book Review: YOU WOULD HAVE TOLD ME NOT TO 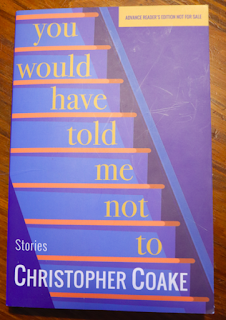 The title of this collection is a clue to what unfolds in the stories as, with unfailing empathy for his characters and a flawless ear for natural dialogue, author Christopher Coake takes readers down one surprising life path after another. And if I say that I looked back to check the name on the cover more than once, confirming that indeed a man had written this book, I intend that as a high compliment: I’m talking about the way Coake gets inside each character’s head so successfully that he seems to be narrating from a life other than his own. Each character, regardless of gender or age, is fully realized, that is, fully real.

In “The First Time,” the opening story in the book, we meet Bob Kline, on the verge of divorce from Yvonne, the girl he took to the prom years before. Out of the blue, Bob receives an e-mail from a woman whose name he does not recognize, telling him that another woman, also with an unfamiliar name, has recently died and wanted her friend to notify Bob. Who was this Annabeth, anyway, and why would she have wanted Bob to know of her death? Looking for answers, Bob agrees to meet Vicky, the e-mailer, for drinks, and as he gradually learns why long-ago events he barely recalls mean so much to a surviving friend, he also relives his own “first time” with his soon-to-be ex-wife.

Often in life, what is essentially important to one person in a relationship plays a much smaller role in the mental furniture of another. In the haunting story simply titled “Waste,” the near-homeless narrator, a day laborer in an urban setting that could be Anywhere, U.S.A., is reminded of a teenage girl (he was "first time”) he knew briefly once in Reno, Nevada. The reminder comes when a new young kid joins their cleanup crew in a building scheduled to be gutted from top to bottom. As is true of all the stories in You Would Have Told Me Not To, this story does not telegraph its destination ahead of time. Rather, it unfolds – like life.

The title story involves a mother, her adult son, the son’s wife, and the mother’s ex-husband (son’s father). A fractured family, these four come together following a shooting incident, but in coming together they still have difficult waters to navigate. Doesn't the title sound like something someone would say to a parent when explaining why important news had not been communicated?

An abused ex-wife (“This Will Come as a Surprise To You”) wonders if she should warn another woman about getting involved with the same man. Has he changed, or is he the same? … A college student (“Getaway”) is separated for the summer, as punishment, from a girlfriend whom he is not sure he loves but with whom he maintains forced, lukewarm telephone contact even as he finds himself in another sexual relationship. Each story, characters and setting, forms a movie in a reader's mind.

Those with a penchant for longer fiction may want to begin with the novella that closes the volume, “Big Guy.”

Doug Ritchie had heard the nickname for years, and he’d never allowed himself to mind it. He had no right to mind—he was after all, a fat man….

As was true of the first story (in this sense, “The First Time” and “Big Guy” bookend the collection), Doug is also being divorced against his wishes by a slim, beautiful, successful woman who wants to move on. When after an initial period of wallowing in junk food, Doug vows to lose weight and become a new man, his high school English students become his cheering section. A colleague, Nancy, joins him on the school track every morning, and after a while they appear to have embarked on a new life of weight loss, new clothes, attractive appearances, and happiness. How hard will it be, though, for Doug to see not only himself but another as deserving of understanding and encouragement? And how hard will it be for him to leave behind dreams of the old life with Wendy?

Individual growth, sometimes painful struggle, miscommunication and unrequited (or unequally requited) feelings – as well as daydreams, speculations, fantasies, and newfound happiness – these are the author's subjects. And while Christopher Coake’s stories do not all wear the adjective ‘domestic fiction' comfortably, all focus closely on individuals both as they are in themselves and as they are in relationship. Do we ever “move on” without taking with us everything from the past that formed us, terrible errors as well as youthful dreams?

Want a series of little vacations from your own life? This book will do it for you. Look for it when it comes out in July.