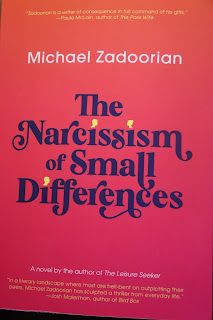 What did it mean to be turning 40 in 2009 Ferndale, Michigan, to be in a committed15-year-long relationship frustrating to two sets of parents because it involved neither wedding nor, more to the point, children? Joe resists selling out to a “real,” i.e., full-time job paying real money, while Ana supports them both as a creative worker in a Detroit advertising agency. She enjoys solving creative problems but is beginning to wonder if she and Joe are weird. — Or does she fear they are not?

She didn't used to worry about being weird. Weird used to be a good thing, something she aspired to but never really achieved.

Joe’s response to Ana's stated worry is that they are a “disgustingly normal” couple. What he doesn't say to her is that in addition to being monogamous, they no longer stay out all night, rarely have sex any more, and spend much more time on work than fun. But isn’t that what normal is?

While Joe and Ana live in Ferndale, it is Detroit that takes center stage, both in the novel and in the identity of the two main characters. The couple takes pride in not living in “the affluent suburbs,” but in an “inner-ring city,” as Ana somewhat defensively describes it. The author describes Ferndale is an

...in-between, an interzone amalgam of white and black, gay and straight, blue collar and no collar, that had enjoyed a brief period of gentrification a few years earlier, but was not suffering along with the rest of the state after the collapse of the auto industry.

Ana’s job is for a Detroit advertising agency, one fortunate enough not to have been dependent on the auto industry and thus still financially viable, while Joe concentrates on freelance work, which mostly means writing snarky capsule reviews (or “any writing job they would give him, no matter how shitty”) for the Detroit Independent as his dreams of finding recognition as a fiction writer fall by the wayside. His dream died after three literary reviews in a row folded after accepting stories from him.

He considered writing a novel, but then thought about all the people who would be left unemployed and homeless if he happened to put down a major publisher. That was what he told himself, at least.

And that very reason Joe gives himself for not attempting a novel sets the tone for the youthful urban society Zadoorian holds up for our scrutiny. It is a society ruled by irony. As he begins to realize he’s aging out of the reigning ironic worldview and having a harder time catching the tone, Joe begins to think of it “dog-whistle irony.” But the same coffee house waiter’s comment that a job waiting tables keeps his “head straight” while he hopes for success in the music world, his real love, is an example of one of the things Joe loves about Detroit.

It was that twisted Midwestern work ethic, the factory rat DNA that threaded through Detroiters, embedded by generation after generation of immigrants who put their heads down and ground it out in a loud, grimy, windowless place for thirty or forty years, because that was just what you did.

Does he, though, love that working-class DNA unironically? Grinding it out year after year in a factory is not, after all, what Joe does. He has been riding along on his girlfriend’s salary, as his dreams of living by journalism, let alone literature, grow ever dimmer. Finally, at one point in the story, he goes to the editor of the independent newspaper that has bought occasional pieces from him, with the slim hope that he might be hired on a full-time basis.

Once Tim stopped laughing, he filled Joe in on the realities of the situation. … “We love your work, but I can’t offer you shit. There’s only one person in editorial with a full-tie position, and that’s amazing in itself. I fear they’re trying to figure out how they can get freelancers to do my job.”

Another deep drag on the cig. “Joe, this is an alternative newspaper. Part of ‘alternative’ refers to finding alternatives to actually paying people money."

Part of Joe’s education in the ways of the 21st century involves learning that the “independent” newspaper he loves is now owned by a giant conglomerate. Jobs are hard to come by these days in the former Motor City.

Not too many years before 2009, Joe had written an article on “Detroit’s burgeoning underground tiki culture,” and readers familiar with Zadoorian’s previously published work will immediately recall his haunting collection of short stories, The Lost Tiki Palaces of Detroit. Why, Joe wonders about himself, is he still going to tiki parties when other people his age are at PTA meetings? The tiki theme, further developed later in the novel, harks back to a particular moment of Detroit's past, as well as reflecting on a character and a city having difficulty moving forward.

On an out-of-town ad shoot in Chicago, the line producer for the production company asks Ana,

“Isn’t it nice to get out of Detroit?”

Maybe he didn’t mean to imply that Detroit was a hellhole and anyone in their right mind would want to escape, but that’s sure how it sounded to Ana. Even though it often was nice to get out of Detroit, considering the perennially dire situation there, she certainly wasn’t going to admit it to him.

“Actually, I miss it,” she said. And she truly meant it.

“Yes. And there’s no need to be so surprised,” she said, not bothering to hide the anger rising in her voice. “I love where I live.”

Zadoorian's comedy of manners gently and lovingly mocks and ridicules a generation that has grown up on irony, men and women who don’t see themselves as selling out even when they do it, as if their irony proves to them that they aren’t taking themselves seriously enough to be accused of selling out. Joe thinks of the people he has met in the advertising world -- excluding Ana, of course -- in this way:

It was as if they were saying, We are not like the people to whom we sell things. Often they didn’t seem anywhere near as evolved as they fancied themselves. Sometimes they were just people with bigger paychecks, bigger egos, better clothes, and too much cynicism for their own good.

Zadoorian’s writer’s heart, however, is too true to reduce his characters to caricatures. At their cruelest and most smart-alecky, their creator never loses sight — nor does he allow his reader to lose sight — of their essential humanity and the tender vulnerability lying beneath the shiny surface. A promotion for Ana and a full-time job for Joe move the story forward with an apparent solution to the couple’s financial problems and promises of greater opportunity for creative fulfillment in their careers. Ironically (and really, one cannot resist the word in the context of this novel), the solution creates its own problems, both personal and professional, and pushes the main characters to a cliff edge of decision.


As one reviewer said of a previous Zadoorian book, you don’t have to be from Detroit to enjoy this novel. But as well as offering entertainment, The Narcissism of Small Differences also serves, in its way, as a social time capsule for one particular part of one particular generation in one very particular Midwestern American city, Detroit, Michigan. You should visit! It's a good time for time travel right now.

Note: While the publication dates for many books due out this season have been pushed back, in light of the COVID-19 pandemic, the official release date for The Narcissism of Small Differences is still officially May 5, 2020. If that changes, I'll let you know.

I loved reading other Zadoorian books and look forward to buying this one and absorbing myself, again, in Michael's writing. His character's are always interesting people I'd love to meet.

Thank you, Deborah, for confirming my own impression. And now, after writing my own review, I find this from author Paula McLain: "In THE NARCISSISM OF SMALL DIFFERENCES, Michael Zadoorian writes with smart, skewering accuracy about relationships and midlife, about the costs of irony and complacency, and about how change for all of us, whether we're ready for it or not. Zadoorian's humor does that rare thing: packs a puncheon as it moves unto sympathy and emotional connection. With Detroit as his steady muse and memory palace, Zadoorian is a writer of consequence in full command of his gifts." I mean, WOW! Paula McLain wrote THAT! I especially love that last sentence, but the whole thing is great -- and right on target.

I'm a native Detroit, grew up inside the city limits....just. Thanks f
or the great t review. Know not the author,but look forward to getting acquainted.