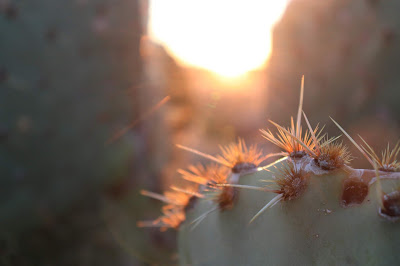 My volunteer tutoring job having been suspended by concerns over the coronavirus pandemic and subsequent school closing, I looked forward all the more to Monday morning at the Friendly Bookstore, my remaining volunteer gig — at least for now. Run by the Friends of the Library (that’s the Elsie S. Hogan Community Library in Willcox, the Friendly is the only bookstore in Willcox, and so it has been a big part of our winters here since 2015. But should I go to work at all? Bearing in mind the current recommended six-foot social distance rule, I felt safe enough behind the bookstore counter to enjoy my three-hour stretch. 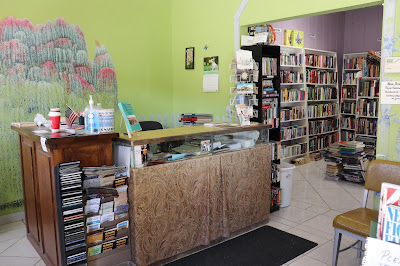 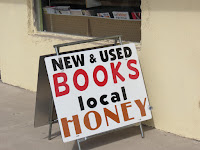 How many times over the years have I remarked that a bookstore could exist if it offered only history and mystery? The Friendly is very oriented toward both, and especially toward Arizona and Southwest history. Plus a very large selection of children's books -- and it's important to keep those kids both entertained and learning during all the school closings right now. We also offer honey, supplied to us by a beekeeper down in the southern part of Cochise County, and people come quite a distance to buy it. In fact, some days I sell more honey than books. 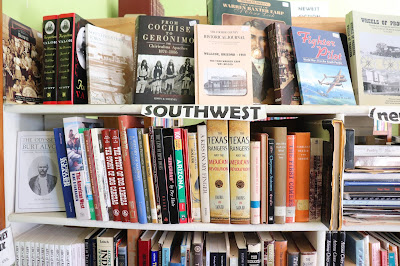 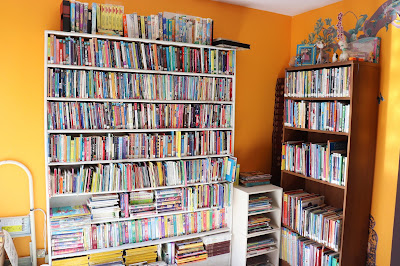 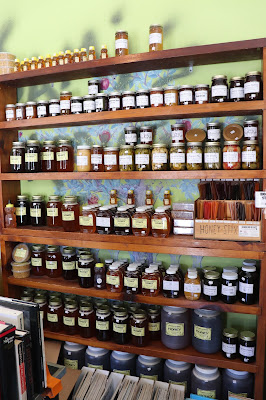 When the Artist and I are back at work in northern Michigan and getting ready for another day in bookstore and gallery in the village of Northport, we often wonder who will come into our establishments that day and what kind of conversations we will have. There is no predicting what any particular day will bring, and part of our pleasure at the end of each summer day is sharing stories of our respective encounters, as well as the occasional unexpected big sale. We meet so many interesting people!

I haven’t spent enough time working at the Friendly (this is my first season) to recognize a lot of repeat bookstore customers, but one man who has been in three or four times on Monday mornings is a reader of history, and there was a five-volume of Toynbee I would have liked to sell him, but he already had that work at home — and anyway, he felt Toynbee’s history was too whitewashed, too official, or, as he put it, “high school history, when what you want is college history.” That led me to ask (because staring at me over the counter, on shelves opposite, were several volumes of Bruce Catton’s Civil War series) if he had ever read Bruce Catton. He had not. I said Catton was probably best known for his work on the Civil War but had also written a very readable and not at all “whitewashed” history of the state of Michigan. Another man walked in about then and perked up at the reference to Michigan, saying he was from Michigan himself. 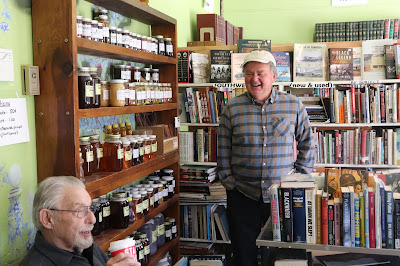 The Artist was on hand, and from Bruce Catton the conversation quickly moved on to where the new browser was from in Michigan. Well, he lived in two places, downstate and the Upper Peninsula, and he had an orchard in the U.P. Oh, where? West of Newberry. He grows apples, pears, and cherries, and his is the northernmost cherry orchard in Michigan. Yes, we know that area well. We have spent a lot of time in Grand Marais. Were we familiar with Jim Harrison? Yes, he was a friend of ours. Well, this man had attended a memorial gathering in Tucson for Jim, and a couple years before that he had attended a memorial gathering for Charles Bowden, at which Jim was the first speaker. Talk veered back to the U.P., via the life of Jim Harrison and his love of good food, and there we were, the three of us, mentally traveling old M-28, which prompted the Artist to ask the Yooper orchardist if he remembered Rashid’s grocery on the south side of M-28 between Newberry and Seney. Of course he did! His orchard is only about a mile from there! And as if all that weren’t enough, Jerry Bishop also speaks French and has travelled in the south of France!

There had been no way to anticipate this Friendly meeting, and it reminded me of what we say so often in the summer back in Michigan, marveling at the unexpected individuals who show up at our places of business in Northport: “You never know!” What will a day bring? We never know. We certainly would have been unable to predict on Monday morning, leaving our winter cabin for Willcox, that we would meet someone familiar with Rashid’s Grocery on M-28 and who had heard Jim Harrison speak at Charles Bowden’s memorial and who had also traveled in France and was himself a French speaker!

At the present historical juncture, the phrase “You never know” sounds a more sombre note, not only for us but for the whole world, but we do have our own personal and specific concerns. Will we be able to return to Northport as planned in May? What will be happening across the country by then? Questions closer at hand arise, too, one of them being, Will the Friendly Bookstore be open next week? Yes, we have a good supply of reading material at home (much of it from the Friendly, in fact), but if this volunteer job vanishes, also, I will miss my encounters with local and visiting readers in Willcox, just as I already miss my Wednesday morning tutoring sessions with little readers at the elementary school.

The truth is, though, that we never know, in the best of times, in the most ordinary of circumstances, what will happen in our lives from one day to the next. There is no guarantee that the future will be like the past. All the more reason, I suppose, that I am enjoying so much one of my Monday purchases from the little bookstore where I worked for three hours that day: How to Catch a Frog, by Heather Ross. And when I’ve finished reading that book and have wrapped it up to mail to my sister, who will love it, too, I’ll get back to Barbara Kingsolver’s High Tide in Tucson, and Wild Horse Country, by David Philipps, and after our evening movie, the Artist and I will snuggle down under the covers and I’ll read aloud another chapter of Chiang Lee’s The Silent Traveller in Paris, and we’ll be grateful to have had one more day together, this one under the Arizona sun, in Friendly surroundings, regardless of what the future brings. 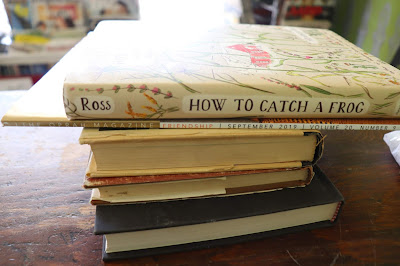 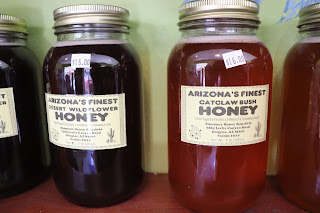 Postscript to the nervous: We have ordered another propane delivery, gassed up the car, and have plenty of groceries and paper products, as well as paper, pens, stamps, and books in the house. We are prepared to do a lot of staying home, and you can see my first "home ground" adventure (with Sarah) here.

That is so neat, running into people and finding on some commonality.
Our daughter at Washburn U keeps us supplied with sweatshirts and we
have run into several people that had gone there, grew up around there or were otherwise familiar with the obscure Topeka college.
I've worked with an known a number of Techies from Michigan tech and
my brother in law graduated there (he knew an engineer I worked with
who was in the next class). Although a 40+ year Idaho 'native', people still ask if I talk funny because I'm from Wisconsin. Turns out they are right, I notice they do when I go back to visit). I'm thinking that if we had the time to chat with everyone we come in
casual contact with, there would be some interesting common connections. The converse is also true: we knew a couple that toured
Europe and were warned before leaving to not wear anything that
suggested USA. They took Canadian gear and were delighted with their
reception...even in France. Bruce Catton has a place in my library,
his Civil War volumes alongside those of Shelby Foote. I commiserate
with your customer with an interest in history- I gave up on the local library, their fare scantier than my own. The current pandemic constraints are very interesting, the effects of social distance on
brick and mortar stores. Maybe even more significant, the effect possibly on tourism. It is hard to think ahead as events seem to come
up by the hour....

We didn't wear any clothing bearing words of any kind when we were in France, but everyone treated us beautifully, whether in the countryside or in the city of Paris. Time and again people went out of their way to help us. I think it was because we were so happy to be there (and to be there together) that people just wanted to spend time with us. The first time I went to Paris alone, I was warned that people would be rude and that I would be miserable, and I told people, "No, I will be so happy to be there that everyone will love me!" I can't say I inspired love, exactly, but I certainly loved the city. When asked where in the States we were from, David and I would always say, "Near Chicago," since everyone has heard of Chicago, but it would have been surprising to meet people who knew Northport. --Although, YOU NEVER KNOW!

Since you are already a Catton reader, I want to recommend highly his MICHIGAN: A CENTENNIAL HISTORY and also his memoir, WAITING FOR THE MORNING TRAIN. Haunting, beautiful, honest books. No one like him.

Stay safe and healthy, please. Good to hear from you!


Hey two!
Thanks for the great blog!
glad you two will be watching a movie and reading together.....we will be doing the same!
Carla and Bruce

Carla and Bruce! How lovely to see you here! Yes, we are reading and watching movies -- and I'm cooking and baking -- and David is setting up a little "home" studio in one of the cabin's outbuildings. If we have to "shelter in place" here, it's a pretty good place to be. I'm glad you two will be staying safe, too! xxxooo!!!