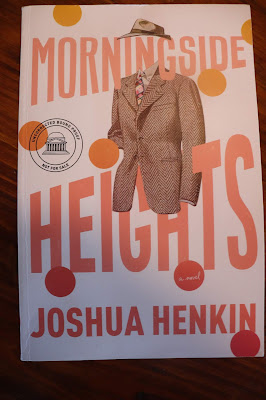 …It wasn't that she missed her parents, though late at night, listening to her sleeping roommates, she would think of her family back in Ohio and grow teary-eyed….

She was no longer forced to keep kosher, but to her surprise, she continued to….

She was again dating an older man….

This is the Pru we meet in the opening chapter of Joshua Henkin’s new novel, Morningside Heights: Keeping family close to her heart, surprised by her own commitment to her religion, dating an older man. Pru remains basically herself as the years pass: she marries a different older man, keeps kosher almost as a reflex, and is lives devoted not only to her husband and daughter but also to her husband’s son from an earlier marriage. Life, however, throws her a lot of curve balls, and Pru and other characters must reassess their values and beliefs over and over.

Pru Steiner, graduate student, and Spence (born Shulem) Robin, her professor of English literature, will marry. Before they do, though, we learn of Spence’s son, Arlo (Zackheim), and Linda Zackheim, briefly his wife. In the sanctuary of their own marriage, Pru and Spence’s daughter is born, and we follow Sarah, also, to adulthood, as we follow Pru and Spence, Arlo and Linda, switching tracks frequently, the tracks sometimes coinciding, sometimes diverging, sometimes reversing. In time we come to know Ginny and Rafe, who become essential to Spence and Pru, and much later Walter appears. Growing in complexity — and in confusion for some — the family has overflowed blood boundaries.

As has become more the rule than the exception for novels in our time, Morningside Heights does not proceed in strict chronological order. We are introduced to Pru and Spence at their first meeting, but not long after that find ourselves spending as much time in the past as in the novel’s ongoing present — a structure that must have once been revolutionary and confusing to readers of fiction (as well as to movie-goers), but one now so standard that it excites little if any dismay. We follow the characters easily back and forth in nonlinear time, as authors use this structural device to reveal events that shaped relationships as well as each individual and his or her place in the dynamics of an ensemble.

It might be said that Morningside Heights is a New York novel, and certainly the city remains the center of the universe for its characters, even when they find themselves in Washington, D.C., or as far away as Los Angeles or Portland. Thus the streets, parks, and boroughs will play a role for any reader who has ever called New York home. But familiarity with the city — or with Jewish traditions — is not at all necessary to immersion in the story, since it is basically the story of a marriage and a family. Just don’t expect to find a family you can label “happy” or “unhappy,” “successful” or “dysfunctional.” Henkin is too alive to the limitations and inevitable confusions of human beings, as well as to life’s complexities, surprises, and unintended consequences, to oversimplify or categorize the Robin-Steiner-Zackheim family.

In the early chapters, I almost had the feeling I was reading something from the mid-20th century, perhaps a book written by Herman Wouk (which is not necessarily a negative for me, as I recall vividly the story of Marjorie Morningstar and its effect on me when I read it in the 1960s), and perhaps there is something of Wouk’s influence in Henkin’s style, but the structure and contemporary issues keep Morningside Heights from feeling “retro” for long. The character of the professor, writing his lectures out longhand for his secretary to transcribe, is as true to our time as the dyslexic digital startup success or his half-sister the medical student who shepherds their father and her mother through a drug trial everyone hopes will reverse the professor’s Alzheimer’s disease.

While the author takes Pru’s point of view perhaps more often than he does that of any other character, father-son, brother-sister, and wife-caregiver relationships are all sensitively explored. And Henkin deftly avoids giving any character the “upper hand” for long — or ever the “last word” on right and wrong. No, as much as several of them, individually and  more than once, feel they are showing up at least one perhaps-temporary opponent, all are necessarily making their decisions, as we all must, on partial knowledge of the past and present and near-complete ignorance of the future.

Henkin seduced me gently into his created world, so gently that I was in over my head before I knew it and sorry, eventually, to arrive at the last page.

Marriage, parenthood, growing older — none of it is ever “what we signed up for.” We jump or are thrown in, and what we make of it all is up to us. A novel like Morningside Heights reminds us that we’re all in the same boat, and that can help us feel less alone.

Morningside Heights
by Joshua Henkin
NY: Pantheon Books
304pp
$27.95 hardcover
Change of publication date: Due to the COVID-19 pandemic, Morningside Heights will not be released until June of 2021, when we all hope the world will be in better shape.