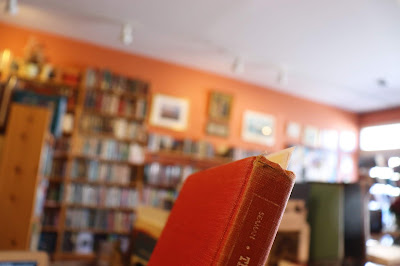 The book I was so excited to find at a sale recently doesn’t look like all that much at first glance. Unfortunately, the dust jacket is missing. The spine ends are somewhat, though not horribly, bumped. Slight fraying starting to appear at the ends, too. But I was excited, because the title is one I remember from my girlhood and have never forgotten, though this is the first copy of the book I’ve seen since the library copy I read in the 1950s.

The flying sand and salt spray were in her eyes, in her mouth, in her hair. Her lips tasted of brine and her teeth felt gritty with sand. She was too occupied keeping out of reach of the roaring surf to care, and she had to jump about constantly to avoid the crawling, spreading edges of the breakers that frequently crept up on her unaware. For this was a howling northeaster on lonely Heron Shoals Beach. But Posy had no thought of its inconveniences or dangers. She was enjoying it to the full, chasing retreating waves and flying before oncoming breakers. This was life! This aroused a fire and enthusiasm that she had never known before!

from The Vanishing Octant Mystery, by Augusta Huiell Seaman

Then Posy spots a treasure on the waves! It eludes her grasp, and she spends the rest of the book searching for it on the beach, where her family has rented a house for the summer.

I cannot recapture my feelings as a youthful, first-time reader of this novel, but I do remember that it was one of those books (like The Silver Nutmeg, by Palmer Brown) that I checked out of our grade school library to read over and over. Today I read online that Augusta Huiell Seaman’s novels for young readers predated the Nancy Drew books in offering adventures and mysteries to girl readers. I may not have read any of her other books and first read The Vanishing Octant Mystery (originally published in 1949) years after the author had died. (Not that I knew or cared about that at the time!) But Seaman was born in 1879, for heaven’s sake, and published her first book, The Boarded-Up House, in 1915, before either of my parents was born! In fact, The Vanishing Octant was her last book, appearing) in 1950, the year before her death, and by then Nancy Drew and all manner of other mystery series and stand-alone titles for young people had appeared. 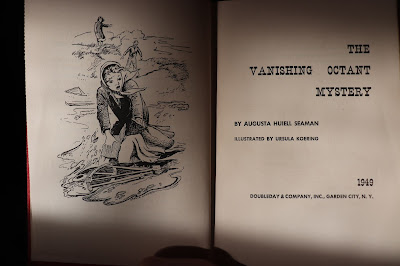 (Another favorite of mine was The Boxcar Children, by Gertrude Chandler Warner, though I could never accept the idea of sequels to the original book — sequels I only learned about as an adult — since the entire premise at the beginning was that the children had no family and had to fend for themselves in the world, and in that first book they are reunited with their grandfather. But I digress….)

When I first read The Vanishing Octant Mystery, it transported me through time and space in more than one sense. Let’s say I must have been nine or ten years old; the girl sleuth in the story is 13. At that time in my life I had never seen the ocean, let alone studied ocean navigation. (Still have not done the latter.) But also, the instrument at the heart of the story, the octant, was originally invented around 1699 and produced in the eighteenth and nineteenth centuries until superseded by the more familiar sextant. I’d never heard of such a thing. The description and history of the octant fascinated me. For me, then, the octant itself would have been a mystery, even had it not disappeared.

We see very little of the inner life of characters in this story — only a hint, now and then, of Posy’s thoughts, no one else’s. There are no murders, no dead bodies, no guns or knives or other weapons. No characters are involved in flirtations, let alone love affairs, doomed or otherwise. The most vivid “character,” if I may put it that way, is the ocean itself. The story opens with a foretaste of the ocean’s violence, violence that reappears, magnified, in the form of the hurricane that blows through several chapters, bringing various other characters together and the story to its surprisingly undramatic conclusion. I am tempted to summarize the finale, but that would constitute a spoiler.

Many of the author’s books are now in public domain and available as cheap paperback reprints ($9-10 range). Some were published earlier in paperback by Scholastic. Note that The Vanishing Octant Mystery was published 1949, which is 70 years ago, so will it be coming into public domain this year? I don’t have an answer, but a signed first edition with worn, chipped dust jacket is offered by one bookseller for $327, and another, not signed but priced at $80 online, is described as follows: No dust jacket. Ex-library. Cover is bumped to boards on corners, spine tips are missing, spine is faded, cover is rubbed with water spots on front. Front binding is loose. When you are looking at descriptions of books online and can’t hold them in your hands to examine, it’s imperative to understand the grading system — and, if possible, to know and trust the dealer from whom you’re buying. As my copy (not ex-library) is much better than the $80 book online, I’m pricing mine at $100.
In the story, Posy’s father explains to his housekeeper the instrument his daughter saw in the surf in these words:

“[It’s] … an old instrument they used to have on ships, to sight the sun with at noon every day and get their positions, like they do now with a newer kind called a sextant. This one was an earlier kind called an octant. They don’t use octants any more, and they are considered rare.”

There are enough copies of The Vanishing Octant Mystery available online that I wouldn’t call it rare, but it is fairly scarce. As I say, I haven’t seen a copy since the 1950s, and since entering the book business I’ve been looking for favorite old titles in bookstores, thrift shops, and antique stores, at estate sales and garage sales.

It’s always exciting when the wind and waves toss up something I never expected to see again. So I can’t help imagining some unsuspecting browser in my bookstore suddenly coming upon this book — or another from his or her past — and exclaiming over it in delight. It’s like finding treasure on the beach. Serendipity! That thrill of discovery is difficult to match with online searches, and I know, because I’ve done plenty of those, too, over the years. 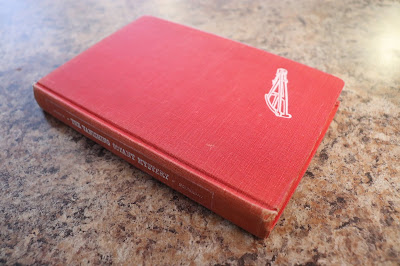