Whose “Good Old Days” Are You Talking About? 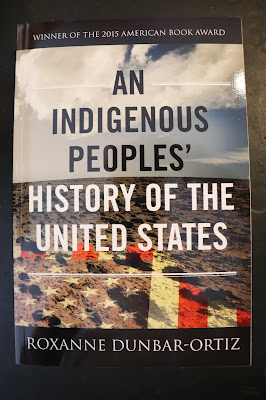 “History is a nightmare from which I am trying to awake,” said the character Stephen Daedalus in the novel Ulysses, by James Joyce. True for the Irish, and it should have been true for the English, also, but was it? An Indigenous Peoples’ History of the United States is a difficult book to read, because the facts themselves are brutal, but for that very reason it is also an important corrective to U.S. history as generally taught. I’ve made my way through it slowly so as not to skip over any of the unbelievably horrible but horribly real — and horribly repetitive — details. The awful repetition of horrors is important because it shows that, rather than being something that can be brushed aside today as anomalies, all were part of systematic, government-sanctioned and often (though not always) government-led racism and genocide in our country’s history.

Roxanne Dunbar-Ortiz did not grow up on a reservation but “in the midst of,” as she puts it, Native communities in rural Oklahoma, her father a cowboy, her mother “ashamed of being part Indian.” She became involved in political movements in the Sixties — antiwar, civil rights, anti-apartheid, women’s lib — and eventually with the American Indian Movement (AIM) and the International Indian Treaty Council. She earned her doctorate in 1974 with a dissertation on land tenure in New Mexico. It’s easier to tell you about the author’s background than about what’s in her book, though, because even white people know, after all, that the history of the frontier was not a happy one for Native Americans. We have all heard and read that the westward movement was made possible by a series of broken treaties and bloody encounters. But what about colonial days? Weren’t we taught in grade school about a peaceful “First Thanksgiving” between Native Americans and English colonists?

One point the author makes repeatedly is that the “Indian Wars” did not begin in the Wild West but right there in the beginning on the Atlantic Coast. From England’s invasion and subjugation of Ireland (that nightmare history) came the practice of scalping, with bounties paid and few if any questions asked about sex or age of the murdered and mutilated. Thus immigrant men without property in the colonies and new United States, organized into volunteer militias, might better themselves financially as scalping and land-taking practices accompanied immigration to the North America.

European justification for seizure of Native lands can be traced back to the 15th century, when the pope promulgated and clarified the Doctrine of Discovery, cited in 1792 by Thomas Jefferson and reaffirmed by the U.S. Supreme Court in 1823. According to this doctrine, which came to be enshrined in international law, “discoverers” of a land could claim it as territory for their own country, thus jumping the property rights claims of all other European countries. Prior inhabitants (called “First Nations” in Canada) were not considered to have any property rights in their own homeland. In their religion, land was too sacred to be bought and sold — and so they were sold out by invaders with a different set of values and customs.

Another theme Dunbar-Ortiz presents is the idea that “total war” — i.e., war fought not only between armies but waged against an entire population, with villages and crops burned and game slaughtered so that, facing starvation and “scorched earth,” no choice is left but to take to what was called, in the case of the Cherokees, the “Trail of Tears” — is nothing new to the U.S. military. Used first against Native Americans, it was national and military policy at the highest levels of American government, as the author demonstrates with quotations from governors, generals, and U.S. presidents. Military experience in dealing with Native Americans was subsequently taken overseas to the Philippines and, later, to Vietnam. The first U.S. invasion of Iraq was promised to bring speedy victory of U.S. forces over Iraqi “Indian country.” The phrase “Indian country” came from the Vietnam era but has come to be abbreviated as “In Country,” disguising the origins of the term designating “behind enemy lines,” the change, though at best only cosmetic, perhaps due in part to a protest from the National Congress of American Indians in 1991.

I’m refraining from incorporating very many quoted passages, but here’s one that encapsulates all the rest. The author writes that Dee Brown’s 1970 account of a 19th-century massacre, Bury My Heart at Wounded Knee, became a “surprise best seller,

so the name Wounded Knee resonated with a broad public by 1973. On the front page of one newspaper, editors placed two photographs side by side, each of a pile of bloody, mutilated bodies in a ditch. One was from My Lai in 1968, the other from the Wounded Knee army massacre of the Lakota in 1890. Had they not been captioned, it would have been impossible to tell the difference in time and place.

- Roxanne Dunbar-Ortiz, An Indigenous Peoples’ History of the United States

Dunbar-Ortiz, however, does more than bust myths and document genocide. Equally important to her story is Indigenous resistance and survival, from the beginning to modern times, including legal battles ongoing today. Here’s one that may surprise you:

…In the first land restitution to any Indigenous nation, President Richard M. Nixon signed into effect Public Law 91-550, which had been approved with bipartisan majorities in Congress [my amazed emphasis added]. President Nixon stated, “This is a bill that represents justice, because in 1906 an injustice was done, in which land involved in this bill — 48,000 acres — was taken from the Taos Pueblo Indians. The Congress of the United States now returns that land to whom it belongs.”

Yet today, even as I was working on this expanded version of my review of the Dunbar-Ortiz book (a shorter version was written for another publication), a young man from Leelanau County, Zhaabadiis Biidaasige, whom I knew when he was a little boy as Johnny Petoskey, was standing before the United Nations Expert Mechanism on the Rights of Indigenous People, representing the Grand Traverse Band of Ottawa and Chippewa Indians, Kitchiwikwedongsing Anishinaabak, and speaking to the issue of unfulfilled treaty promises made by the State of Michigan to the Anishnabe people.

A special edition for young people of this book is due for release in late July. How will the story be told there? And what do we want American children of any skin color or ethnic background to know about American history? How do we tell them the truth and still inculcate in them a love of their country? Perhaps that depends not only on how we teach about the past but even more on how we conduct ourselves in the present and into the future.