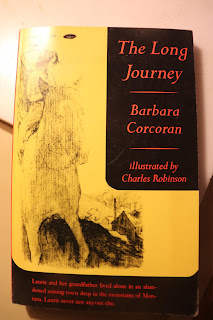 Laurie reined in her horse at the place where the hill dropped away. She sat quietly for a moment looking down at the ghost town that was her home.

As you can see by the cover, the little paperback book shows a girl on horseback, so it merited a closer look. Published in 1970, it said inside. Then the first two sentences pulled me in, and the next paragraph began in a similarly promising way:

Off to the right on another hillside were a dozen little shacks where the miners had lived, and to the left was the long building they had used for a dining and reception hall.

Really! Well, the little ghost town in the book is in Montana, so there are many differences between the settings of Hawkins Dry Diggings, Montana, and Dos Cabezas, Arizona. No adobe in Montana, of course. Instead, summer snow on the high mountaintops, trees on the slopes and across the land, and creeks running with clear water as Laurie heads south to find her Uncle Arthur to let him know that her grandfather, growing blind, needs medical attention.

If she were to make the journey by bus, her grandfather reasons, someone might question a girl that young traveling alone, and authorities would be called in, authorities who might think Laurie shouldn’t be living in a ghost town with an old man, even if he was her grandfather, who would probably think she would be better off in an orphanage. So travel by bus is out.

Couldn’t he just go into their own nearest town and telephone Arthur?

“No, no,” he said impatiently. “Telephones are no good. Can’t half the time hear what the other fellow is saying. You’d never be able to explain everything like it’s got to be explained. No, there’s nothing to do, but go there.” He sighed. “I hate to send you on such a long journey and you so young.”

Laurie reminds him that he had plenty of independence and adventures when he was a boy, and her grandfather is reassured. And so he gives Laurie her uncle’s address in Butte, a map, a compass, three gold nuggets, three silver dollars, and sends her off on her horse.

Laurie has never been to school, never known any society at all other than what she has read in books and in National Geographic magazines, but she knows how to shoot and hunt and live off the land, and she and her grandfather are confident that she can find her way to Butte, no matter how many days the long journey takes. Neither of them anticipated that she would be shot for trespassing while trying to free a colt from barbed wire or that she might meet the devil along the way! Well, maybe not the devil, exactly, but a dangerous and frightening man, all the same, determined to steal her gold nuggets!

It was confusing to meet so many people, all different kinds of people. Her grandfather taught her that the world was bad, but she finds good people, too — Kicking Horses, the boy who guides her to the trail she needs; Miss Emily, the retired schoolteacher who gives her shelter from the storm; Doc Ashe who tends to her gunshot wound. There is even a much younger girl, lost in the forest, needing Laurie to rescue her. Throughout the book, however, a lurking threat appears and reappears in the form of the crazy man on the mule, devil or not, and the song he mindlessly sings, its refrain disturbing Laurie’s peace of mind even when the man is out of sight. Keeping out of his clutches along her way is essential to reaching her primary goal.

Whatever age the reader, there is something exhilarating and inspiring about a young person setting out alone in the world, and as a female reader I find a girl’s adventures bring me added satisfaction. Among adult novels, Bonnie Jo Campbell’s Once Upon a River satisfies in a similar way. Even the dystopic YA novel Hunger Games, by Suzanne Collins, with the unforgettable Katniss Everdeen, gives 21st-century readers hope that even in the most horrible future society, wild nature beyond towns might offer salvation for young people willing to learn and live its ways.

But The Long Journey is a simpler story, the motivation for the girl’s setting off on her adventure uncomplicated. 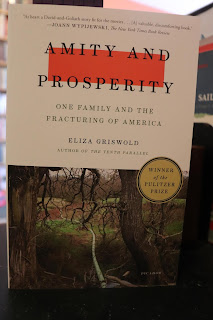 And I needed the uplift of The Long Journey because I’ve been reading a very different kind of book, another difficult book, taking it in small doses but still feeling overwhelmed. The first words of the title, Amity and Prosperity, don’t sound bleak, but the subtitle, One Family and the Fracturing of America, gives a pretty clear warning. Amity and Prosperity, you see, are not what the family will find at the end of the story. They are the names of two desperate towns, and the author of Amity and Prosperity: One Family and the Fracturing of America, Eliza Griswold, tells the story of one family’s experiences when they and their neighbors sign contracts to allow fracking wells built on their land. I can only read a few pages at a time. What was done to these people — what continues to be done in countries that still allow the process — fills me with rage. I’d love to have people with “Drill, Baby, Drill” bumper stickers trade places with the Appalachian residents who thought their lives would be changed for the better by fracking. People were lied to, deceived, taken advantage of, made horribly ill, wells and land and livestock and children poisoned. What is the hope for the future of these people and their land?

So even while I was enjoying The Long Journey, I couldn’t help having intrusive, skeptical thoughts whenever Laurie and her horse drank from wild Montana creeks. Mining has never been an environmentally friendly way of life, and extraction industries in general rely on dangerously polluting chemical processes. How many rivers and streams in North America are clean enough that one could drink their water even after boiling (which Laurie does only once) or purifying it? What if Bonnie Jo Campbell’s Margo Crane had been on the Kalamazoo River after the oil spill of 2010? Even Katniss Everdeen had only society to fear, not poisoned nature.

Such a beautiful world! More wondrous than anything ever built by mankind! How can we mistreat it so, fouling our precious, irreplaceable nest?

Postscript, Tuesday afternoon: We were walking around the marina in Suttons Bay on Sunday evening when we happened upon two little girls catching frogs. None of us knew what kind of frogs they were, but now I think maybe these. Anyway, it made me very happy to see little girls catching frogs. They had a big black net and were putting the frogs in a little see-through plastic carrying case. "Do you want to touch one?" I asked if I could pick one up. Very slippery! It tried to escape, but I got it back in the case and asked the girls what they planned to do with the frogs. "Let them go again," they told me. And that made me happy, too. Girls need adventure and freedom in the great outdoors every bit as much as do boys.
Posted by P. J. Grath at 8:31 AM