Future of America -- For the Birds? 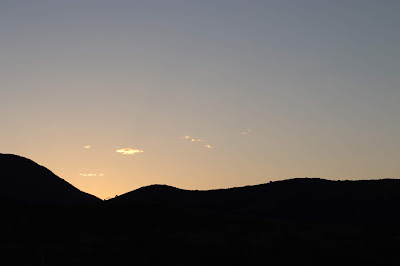 Before 6 a.m. in late April, southern Arizona’s outdoor air temperature is perfect: a refreshing predawn cool after the previous day’s blinding light and baking heat. There is no harsh wind, only the slightest of gentle breezes that barely stirs new leaves on honey mesquite, their sweet, light green like the world’s first leaves. A mockingbird near the cabin competes with rooster and peacocks across the road, far back from the highway, to call the sun up, and a cardinal joins eagerly in the morning chorus. 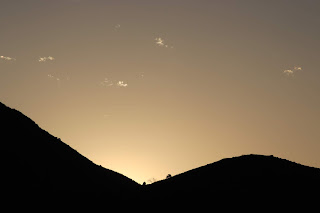 Sunrise has moved considerably south since December. In winter, it is a front-of-cabin thing, welcome for the light it brings to strike directly on windows and the warmth it gradually contributes to our indoor space. Post-equinox sunrise, by contrast, is best watched from behind the cabin and outdoors, and east-facing blinds remain closed. Bright light stripes windows, nonetheless, but our object now is not to add to indoor warmth but to keep it at a minimum. 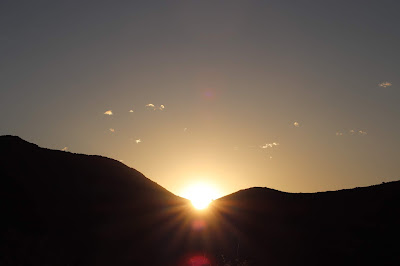 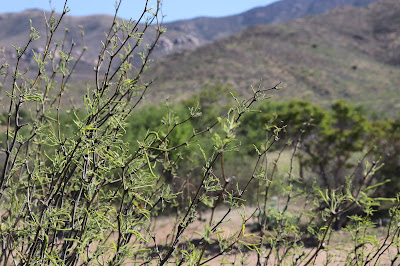 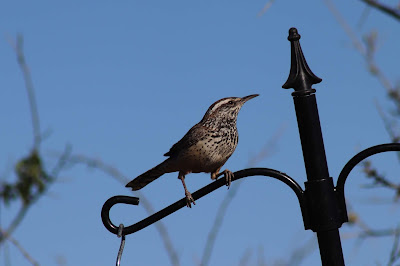 A green mantle spreads over the hills. A distant dove calls. Shadows grow long in the mountains as the sun rises in harsh magnificence. And now the cactus wren, Arizona’s state bird, launches into his rough-edged, repetitive “song,” somehow cheery without being in any way what one might call beautiful. Some birds give us beauty, others awe or smiles or even laughter, according to their effect on us. 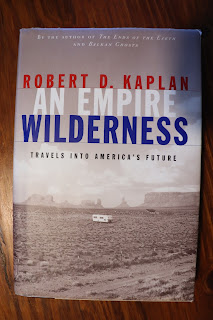 I have been reading An Empire Wilderness: Travels Into America’s Future, by Robert Kaplan, published in 1998, and was nearing the end this morning, having begun with Chapter 13 and after that skipping back and forth from section to section, finally going back to start at the beginning and then leapfrogging over sections read earlier to make my way through the final sections. This is not the way I usually read a book. The reason I approached this particular book in such an odd way is that my time in Arizona (for this year, anyway) is drawing to a close, and consequently my initial interest was in the part of the author’s travels that took him from Mexico to Tucson. Alas, no mention was made of Cochise County. Kaplan crossed the border at Nogales, from the state of Sonora into the Arizona county of Santa Cruz. 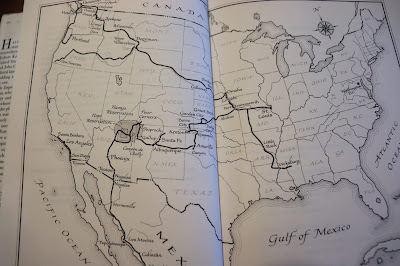 But the book begins at Fort Leavenworth, Kansas, coincidentally the place my father, one year long ago, did his annual summer officers’ training (Command and General Staff School, a requirement for keeping his rank in the Army Reserve) while my mother and sisters and I visited friends in Wisconsin. Kaplan calls Leavenworth “the last redoubt of the nation state,” which makes sense as one reads on. In fact, I found some justification for not reading his chapters in order, since the order of the chapters itself does not represent the temporal order of the author’s continuous travels. Rather, the organization of the book is thematic, intended to illustrate his gradually unfolding thesis about what the future may hold for our country, based on what he finds along the way.

I had to keep reminding myself that the book was written two decades ago. Where Kaplan sees strollers in an American city, for instance, and only one of them is speaking into a “cellular” phone, I should not expect the same scene today. Population numbers and demographic percentages would have to be revised now, also. Much of what he describes I have seen for myself, however, and so it is a familiar America — but I have never thought to anticipate the future he predicts, and so An Empire Wilderness gives me food for thought.

In general, Kaplan foresees a diminished role for federal government and more local control, but in the form of “city-states” rather than cities and in cooperative geographical regions, with natural geographical boundaries, rather than exercised by state government. His example of Montana, a state where east and west have little in common, could be applied also to the Dakotas or to Michigan with its two peninsulas. (How much understanding for its place in the great scheme of things can Houghton expect from Lansing?) All of this I was taking in with a “Hmmm. We’ll see” attitude, alternately nodding and pausing, until the author threw in an idea that hit me like a bucket of cold water thrown in the face, such a shock it was -- .

He writes that Canada, our neighbor to the north, is too large and unwieldy to hold together and is likely to break apart into separate regional pieces, Quebec joining Maine, British Columbia forming a region with the American Pacific Northwest, and so on. Two features of this idea were especially striking: one was that other people, some of them Canadians, apparently shared Kaplan’s view and did not find it alarming or even surprising; another was the inevitability they all saw in this imagined future. Kaplan does not write “if this were to happen” but that

"…the character and timing of Canada’s dissolution will [my emphasis added] affect America’s own future in unpredictable ways."

As the United States also reverts to regionalism, why would the U.S. not also be expected to dissolve as a unified country? Because of our louder presence on the world stage and a more widespread and dispersed national population (without the enormous empty expanses of northern Canada)? The prediction, you see, is that while regionalism will be more and more important in the future of the United States, our federal government will continue its basic function of protection, while Canada’s future regionalism will mean that country completely disintegrates.

Well, this idea makes me think about death! -- and why it is a negative though unavoidable prospect. Not only will it be the end of sense experience — no more sunrise! no more birdsong! — but also, when it comes to each of us, individually, it brings down the curtain on the play at large. What happens next? We don’t get to find out! No wonder literature and drama and film are so satisfying, where we get to see “THE END,” at least as as the writer and director conceived a conclusion, although we often wonder even so “What happened next”” in the lives of the characters. 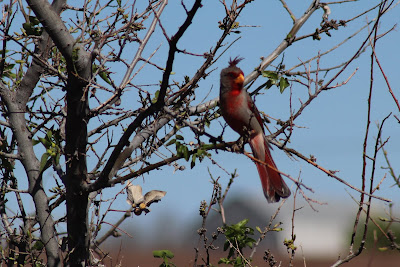 I did reach the end of An Empire Wilderness, however, and sooner than I expected, not having realized that remaining pages held not another chapter but a long selected bibliography preceding an index. And so the author envisions democracy slipping away, “silently replaced by the power of corporations and other great concentrations of wealth.” Ugh! Most of us see that scenario already underway. (For years I have shaken my head in bafflement over Americans who express fear of government interference in their lives and shrug indifferently at growing interference in their lives by commercial interests.) And yet, somehow, Kaplan holds out hope — hope for a global increase of human rights, backed by American military might, and the eventual emergence of an “authentic planetary civil society.”

I wonder…. Does Kaplan’s scenario for the world’s future — diminishing importance, if not outright disintegration, of nation-states; increasing geographical regionalism; eventual global unity of values — contain its own impossible contradictions? What does the future hold for any little geographical region of the planet? For the arid American Southwest, the water-blessed Great Lakes states, old Rust Belt cities, gated enclaves of wealth in every state, family farms and ranches — our land, water, air, and all living things who share the earth with us?


Another morning dawns. The birds begin another day of concentration on staying alive and still find time to sing. We can do worse than to follow their example and take time to be grateful for another day of light and color and song before our time upon the stage is ended. 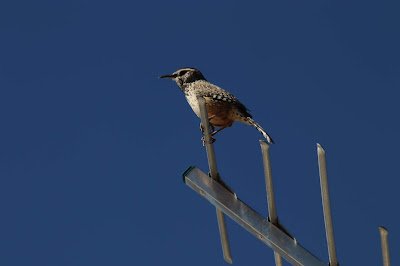