Boulverser is a French word meaning to disrupt, to confuse, but to me its meaning comes in more concrete images. Metaphors long ago buried in ordinary words, usually unnoticed when we speak a language learned in babyhood, are easier to see in a second language, where they stand out for us like pictures. Since boule is a ball, and verser is to pour or spill, I don’t see abstract confusion but a scene full of action, something like a bowling ball sending stout wooden pins every-which-way, many of the pins doing involuntary somersaults before coming to rest. The pins are knocked off their feet — that is, if I were to be thrown upside-down and sideways by a bowling ball, that’s how I’d feel — boulversée. Once in a while I am, anyway, metaphorically. It is a sense of disorientation, of “How can it be?”

Many of us felt that way on Monday when we learned, each in our own way and time and place, that Notre Dame de Paris was on fire.

Those of us old enough to remember November 1963  can tell you exactly where we were when we learned that President Kennedy had been shot. In 2001 the event seared into consciousness was the planes flown into the World Trade Center. Looking back, those are memories, but in both cases, when we first heard the news, it didn’t fit at all. It wasn’t history then but a disruption of reality. It can’t be happening. It can’t be real. The first response was disbelief, resistant to evidence. Dazed disbelief. Then gut-wrenching fear and explosive grief. It can’t be happening. It can’t be real. Please, don’t let it be true!

Long, long ago, when I was a little girl, my beloved cat died, and I cried so hard and so long over the unthinkable loss that my parents thought I might have to be taken to the hospital. At last, my sobs giving way to heaving sighs, my mother thought to distract me from my grief by taking me for a little ride in the car. We drove to the drugstore down the highway from our neighborhood, and I remember my mother’s loving smile as she tried to tease me back to life by saying, “Why the sad face? You look as if you’d lost your best friend.” My mother was not a cruel, insensitive person. She was a good mother. Yet at that moment there was nothing she could have said better calculated to throw me back into paroxysms of tears and wailing. “I have!”

We were at the library on Monday, and I was scrolling through my Facebook feed when I saw the first image of Notre Dame on fire. No, I thought, this must be someone’s idea of a sick joke. (That had been my first reaction in November of 1963 when a classmate told me, as we were taking our seats in English class, that the president had been shot.) I left Facebook and went to the news. It was true. No, it couldn’t be true. “Oh, no! “Oh, no!” I looked around me, but everyone in the library was going about their business in ordinary, everyday ways.

Where was David? I looked in the video/newspaper area, the art book section, glanced into the sunroom. Not there. I went back to my screen but was soon on my feet again. Had he gone out to the car? No. On my third or fourth search mission I found him in the sunroom, around the corner from the door where I hadn’t seen him the first time. “Come with me.” And then we looked and read and watched together, both of us near-frozen with grief.

He had a stack of movie videos for me to check out, so I had to go to the desk on our way out. “Are you all right?” the librarian asked. I managed to find words to say, briefly, “Notre Dame de Paris, the cathedral, is burning.” She checked out the movies for me and then said, “Have a great day!” I thought of my mother so many years before and knew the librarian meant no harm. And yet —

David called a friend, who seemed curiously unmoved by the news. “Was it very old?” he asked.

Yet I know that the two of us were far from alone in our feelings, that all over the world others were with us in our disbelief and grief and fear and, finally, whispers of hope. The roof and spire were lost but much was saved. The world as we have known it is not ended.

So why such shock and grief? The fire was accidental, not the result of hate or violence, and no lives were lost, but had the building been utterly destroyed, as we feared for hours it might be, the loss would have been incalculable. The building represented and embodied centuries of faith, of history, of culture. It was part of individual memories the world over and part of the collective French, European, Western, and world memory, too.

Living much of our 21st-century lives in the make-believe of fantasy games and films, virtual currency, identity algorithms, and instant gratification of various kinds, we can too easily lose sight of the fact of our own embodiment. Human beings evolved for life on earth, not on other planets. and our memories, too, attach in great part to physical objects, places, the whole of our embodied world. A face, a place, the feel of the stones or the wooden floor beneath our feet, a scent on the breeze, a certain angle of light striking just so, a taste on the tongue.

Only two weeks remain for us here in the high desert, beneath the twin peaks of Dos Cabezas. Already overwhelmed by the idea of packing up and heading once again cross-country, then boulversée by the news from Paris, I really, really needed Kathleen Stocking’s new book, From the Place of the Gathering Light: Leelanau Pieces, a book of essays about the home to which we will soon return. I’ll write about that soon. For now, Kathleen’s essays and backyard birds, in addition to the more hopeful news about Notre Dame, are working together to put me back on my feet. Little things: a bee on a flower.... 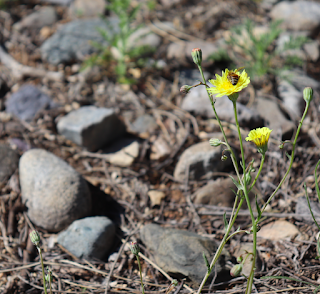 [Note: the goldfinch photo at the beginning of today's post is an old image from my files, a bird that flew into one of our Michigan porch windows. -- Coming back to correct this note: the bird at the top of the post is not a goldfinch but a yellow warbler. One of my neighbors here in Dos Cabezas corrected me when we ran into each other at the library in Willcox. She envied me for having seen a yellow warbler. "Yes," I said, "but it was dead!" Also, I didn't know what it was until she told me. Thanks, Dorothy!]
Posted by P. J. Grath at 8:06 AM