The Challenging Desert Warms My Heart

…The rain had driven everybody indoors. The stock pens east of town were filled with cattle waiting to be loaded onto trains, so after doing chores, the cowboys had a good excuse to visit the saloons to get out of the lousy weather. The Horseshoe [Saloon] smelled like cigar smoke, beer, whiskey, and cow manure.

From a temperature of -10 degrees Fahrenheit at 4 a.m. on Thursday morning, Cochise County warmed up into the high 40s for the beginning of the weekend, and after dark on Saturday the rains came. Rain pattering on a metal roof reminds me of summer evenings on our front porch in Michigan, but I won’t be venturing out through wet grass with Sarah-dog here. Instead we’ll meet with mud and grit. The high desert is very gritty. Even when the ground is dry, we are always tracking in dust and tiny, hard, rough-edged stones, and when snow or rain dampen boot soles, a whisk broom at the door and a mat on which to leave shoes is the only solution.

In the early Sunday morning rain, our little ghost town of Dos Cabezas seemed little more than a scant clearing in the clouds, mountains all around vanished in the mist. The only steady sound outside the cabin was that of the rain and, at long intervals, a truck or camper whooshing by on the high below. Because of the PGS (“partial government shutdown,” but I’m sick to death of hearing that phrase, aren’t you?), Chiricahua National Monument is closed for the duration, and I wonder where all the campers who had planned to stay there will go, since other parks and federal lands that allow camping must also be closed. There are private RV parks in Willcox, so I suppose some will go there, but it isn’t as if vacationers and wandering retirees can just drive to another state. The whole country is affected.

Rain increases from gentle pattering to a pounding pour. (In Phyllis de la Garza’s novel, set in Willcox and the surrounding area, “rain pounded down like a fist.”) If Dos Cabezas is a clearing in the clouds, a restricted area of visibility, it can also be seen as a little lake of land, with each house and cabin, old miner’s shack and crumbling adobe ruin an island. From our small island here on high ground, I can look back along the wash and across the mesquite scrub to a ranch nestled at the base of the mountains to our north, while south, across the highway, other neighbors’ places are visible, as are the lower slopes of gentler mountains that fade away into the mist maybe fifty yards up.

Bonnie Landers, the fictional narrator of Railroad Avenue, periodically throughout a tale in which she meets one terrifying situation after another, reminds herself not to whine. It does no good to whine. That’s another way the high desert is gritty. It’s the same, of course, with nature in general, whether the locale is a mountaintop or the middle of the ocean: nature has no sympathy. On the other hand, neither does it bear us any animosity. It just is. And so you either give up in the face of it, and turn, tail between your legs, or you deal the hand you’re dealt. It isn’t “heroic,” simply a matter of accepting and meeting a situation. It's a different kind of grit.

I will say, though, that in our most recent high desert challenge — a couple nights of unusual and unexpected subzero temperatures that froze and cracked plastic fittings to an outside rainwater storage tank, confusing the pump about where to send water — we would not have been able to deal with the situation on our own.

One neighbor brought water, and a couple of others brought tools and know-how, and after a few round trips to town for new fittings the situation was resolved. The Artist and a neighbor wrapped the repaired pipes to insulate against any future extreme cold, after which the Artist strategically placed ladders around the nearly ground-level prior problem areas to discourage foot traffic by night-roaming cows (free range) and “pigs” (javelinas). We didn’t whine or cry, but the truth is that we would have been lost without our neighbors.

They had stories, too. One hard freeze a few years back busted up pipes from Safford, up in Graham County, to Sierra Vista down close to the Mexican border, and hardware stores all the way to Tucson ran short of needed supplies. It took a trip all the way to Phoenix to buy enough pipe so that half a dozen houses in Dos Cabezas could once again count on running water from their wells to their homes. One man made the trip to Phoenix for the rest.

I’ve read elsewhere about the myth of “rugged individualism” among pioneers on the frontier and how the real story was more, of necessity, neighbor helping neighbor. Of course, I don’t have first-hand experience to back that up, not having been here a hundred years ago. We are here now, the Artist and I, with electric lights and running water and a gasoline-powered automobile to make the 30-mile round trip to town, and we’re only here for the winter, not for the grueling summer, when heat and scorpions and rattlesnakes threaten the unwary. Still, the warm hearts and casual generosity of our ghost town neighbors have made the difference for us between possible and impossible. “Oh, who would inhabit/this bleak world alone?”

Thursday night, before falling asleep, I finally heard coyotes. We hear them all the time back in northern Michigan, and when we first heard them here, back in the winter of 2015, the sound made me feel right at home in what was then a strange, new place. The place doesn’t feel strange any more, but I am happy to hear the coyotes’ voices. Like the sight of the mountains, that sound makes me smile. 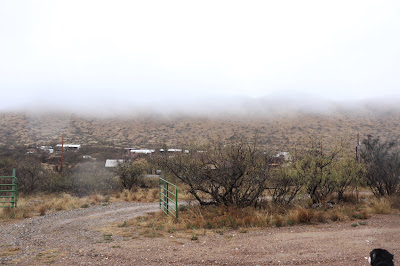 Its always interesting to read about your home away from home. Considering the low temps in that Phoenix, Little Rock, Atlanta
latitude (and unfamiliar with the weather patterns there), I'm thinking that being at 5000 ft and in the mountain foothills, that
happens on occasion. ..so occasionally that water pipes are not deeply buried or insulated? As for the coyotes, it almost sounds like the Michigan variety followed you down there, loping along
Rte 66. It is odd that while you were battling the rigor of Winter, my relatives in northern Wisconsin were reporting weather so mild
that they were concerned. (ice fishing, you know) I am waiting
for Sarah's book 'The Well Traveled Dog' for a canine view of your
adventures!

I love the idea of Sarah's book!! What a grand idea.
Very happy that you have good neighbors both in AZ and in MI, people on whom you can count.

BB! It's been ages! So good to hear from you -- and I, like Deborah, love the idea of Sarah's book. I'll have to start nagging her to write it, eh?

Nighttime temperatures even in winter don't often go below 30 degrees where we are, so -10 caught people by surprise. Today (Monday) the mountains are even more well hidden, with fog so dense that only the roadsides are visible from the road. We enjoy the surprises and seeing different scenery without traveling more than 15 miles from our cabin.

-10 is crazy for out there! Glad your neighbors were able to help you fix the broken pipes. I bet it was cold in the house too, they aren't built for that!

I, too, love the idea of Sarah writing a book. I bet she's got lots of insights to share. If she needs help getting started she can talk to Katie who likes to get her viewpoints out there on a regular basis.

Having on occasion been a ghost writer for our one-eyed housecat Mikey (writes to my grandkids cats), and along the lines of "It Was a Dark And Stormy Night", I'm guessing Sarah would start with:
'It seemed to start in my earliest years. As a small puppy, my brothers and sisters wrestled with old socks, chewed up reachable furniture and chased toy cars across the floor. But I was so different. I would curl up and dream of books and travel....

Dawn and BB, I have to confess that although I did some writing early this morning, it was not in Sarah's voice but in that of an old fictional character I'e spent a lot of time with, on and off, but whom few people have ever met. Thanks for the offer of Katie's help, Dawn. Katie has a very distinctive voice of her own! And BB, you're right that Sarah was not a destructive chewer as a puppy. She never chewed a sock, a show, or a book! But the message I'm getting from the two of you is that it's time for Sarah to make another appearance here in the blog.