Mystery! Just Where Is That “Cat-Who” Country?

We met a few of the high desert ghost town neighbors the other morning for coffee, cinnamon rolls, and homemade biscotti when one of them at the other end of the table from me leaned forward to ask, “You know the ‘cat-who’ books?” I nodded. I have a bookstore, after all, and I started out selling only used books (though I have carried a pretty good selection of new titles for some time now), and the ‘cat-who’ books are murder mysteries. I always say that if you had a store of used books and sold only history and mystery, you’d have nonfiction and fiction covered for the majority of your customers. It would be a good name for a used book business, too: History and Mystery.

So, yes, of course. Though at that very moment the author’s name didn’t leap to my mind, naturally I was familiar with the series, having always one or two of the books in my shop at any given time. And my mother had read all of them. But had I ever read one myself? That’s what stopped me in my tracks when the questioner informed me that the stories were set in my Michigan backyard. Really? “Out in Seattle, they call where you live ‘cat-who’ country.” Really? “Are you kidding me?” No, he wasn't.

Later that same day we stopped at the Friendly Bookstore in Willcox, one of our regular stops, and I went directly to the mystery shelves, where there were two paperback books by Lilian Jackson Braun. I selected the slimmer of the volumes and went home with The Cat Who Sniffed Glue, determined to find out if Traverse City — “or, really, Northport,” the Arizona neighbor had said — were indeed the setting for the stories.

I won’t beat around the bush or lead you on. As far as I’m concerned Pickax is not Traverse City, and it isn’t Northport, either. It has features of many different Michigan towns, but it is definitely U.P., that is, the Upper Peninsula. Your clue, sleuthers, is the phrase “Down Below.”

No one in the Lower Peninsula uses that phrase to indicate they’ve been traveling south, because the Lower Peninsula is “Down Below.” It’s below the Mackinac Bridge, the Mighty Mac, the bridge that spans the Straits of Mackinac and joins the two peninsulas. (And Mackinac is pronounced Mackinaw, by the way, even when there’s a ‘c’ rather than a ‘w’ on the end of the word.) On that much I brook no dispute.

Perhaps, however, another word of explanation is in order for those unfamiliar with Michigan. The neighbor here in southeast Arizona who brought up “cat-who” also loaned us a couple of books set in southern Michigan, and that’s yet another distinction. Northport and Traverse City are in the Lower Peninsula, but they are not “southern” Michigan. To everyone but Yoopers, they qualify as “Up North.” Are we clear now?

As to which is the “big lake” in the Braun books, we could argue it different ways. Where I live, in Leelanau County (i.e., “Down Below”), the “Big Lake” is Lake Michigan, but the Upper Peninsula has Lake Michigan to its south and Lake Superior to its north, so where is Pickax? At one point in the story, someone mentions that Pickax is the “only harbor of refuge” on that side of the lake, but are we to take the statement literally? Is it possible there is only one harbor of refuge on Lake Michigan’s north shore, or only one on Lake Superior’s south shore? That seems unlikely, though of course there are long stretches, especially on Lake Superior, where a sailor is far from a harbor of refuge. And now, checking further, I see that there is not a single federal harbor of refuge in the U.P., and even Northport and Leland, harbors of refuge in Leelanau County, are not federal harbors of refuge. But perhaps this is muddying the waters too much.

Anyway, another element that confounds literalism has to do with restaurants. — But wait, let me back up a bit.

All the mining history in the book points to the Keweenaw (confusingly pronounced KEE-wuh-naw) Peninsula, that rocky, jutting antenna projecting in a graceful curve from U.P. into cold Lake Superior. The number of mansions strengthens the case for the Keweenaw, too, since the kind of fortune brought by mining allowed for mansion-building. So, too, there was an ethnic diversity in the history of the U.P. that would go some way toward explaining the number of interesting restaurants available to characters in the cat-who story, restaurants that would seem wildly out of place in most parts of the U.P. (though perfectly reasonable in the Traverse City region). I mean, come on! No one mentions a single Cornish pasty in the whole book! There are also a lot more farmhouses and barns than I associate with the Upper Peninsula. So where does that leave us?

I guess I could just do an online search and find the answer to my question instantly, but where’s the fun in that? After all, I could have skipped directly to the final chapter of the book to learn the identity of the murderer, too, and not read the story at all, but why? Isn’t it more fun to enter into a story and search for clues? The journey, not the destination….

If you know Michigan and if you’ve read Lilian Jackson Braun’s books, where do you think the stories are set? 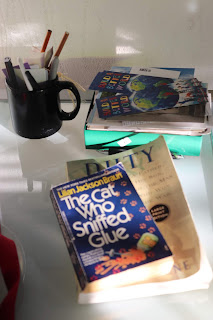 One thing is certain. As I was reading The Cat Who Sniffed Glue, my mother was not far from my thoughts but always there, just across the room, smiling at me. Here I was, reading another book I knew she had read and enjoyed. And I was reading it right after reading another book, one sent to me by my sister, a book she had bought and given to my father — so that in reading that book I was constantly reminded of “the Colonel.” Reading is so much more than escape, so much more even than education. A solitary activity, yet it unites us with other human beings, even those who have passed on.

As for my Western images today, several of them represent what is for me a cow country mystery: Can horses round up cows on their own, without cowboys or cowgirls, and take the herd back to the ranch at the end of the day? If not, what was going on in these scenes we witnessed out near the Willcox Playa on Saturday afternoon?

Here here for book sleuthing!! And I love the remembrances of your mother.....

Thank you, Barbara. I did finally look about online a bit but found nothing conclusive, so I'll stick with my conclusion for now.