Arizona is not all desert, because so much of it is mountain. Scores of separate ranges, each with a name of its own, are sprinkled here and there, and in the southern part of the state they often rise abruptly from the desert floor itself. In fact it is impossible to move anywhere so far away from them that the horizon is not ringed around with peaks.


- Joseph Wood Krutch, The Voice of the Desert: A Naturalist’s Interpretation

In Jane Austen’s Northanger Abbey, Catherine, the naive young heroine of the novel, has an opportunity to travel far from her small home circle for the first time and to meet people with views and experiences wider than her own. She is introduced to new kinds of reading and also new ways of looking at the world. Her impressionability is not lost on Henry, at first a chance acquaintance who very soon becomes a major figure in Catherine’s mental and emotional world.

Older and more sophisticated, Henry is also possessed of a subtle, teasing nature not always understood by Catherine and only held partially in check by his more gentle sister. Though their conversation often leaves her uncomprehending, Catherine is enchanted by both siblings and begins to look at the world through their eyes, finding beauty where she had never previously looked for it, in small, easily overlooked details — for example, a blooming hyacinth. Henry is amused but does not taunt, instead saying approvingly, if tongue-in-cheek, “It is good to have as many holds on happiness as possible.”

Henry might have been teasing Catherine, but I think he was absolutely right to say that about happiness — though as I reflect for a moment I can see that a Buddhist might disagree, for is love not attachment? Never. mind, though. I am not going down that road this morning. Neither the Buddhist path nor that of philosophical debate. Love and the holds it gives us on happiness are my theme this morning.

On our way west, as we crossed the panhandles of Oklahoma and Texas and the first, flat stretch of New Mexico, I was impatient for mountains. Finally, in New Mexico, seeing our first mountain of the trip in the distance. it, I couldn’t help smiling happily. Soon, larger ones appeared. Now, surrounded by mountains every day, I wake in the dark eager for dawn to light up my high desert neighborhood. Though the sky was cloudy for our first couple of days here, there was sufficient daylight to show the contours of the slopes, and as we made the first drive from Dos Cabezas to Willcox I began mentally drawing the mountains on the other side of the playa in soft pencil, a very sketchy mental drawing, mostly broken planes of light and dark, and I felt that smile again on my face. 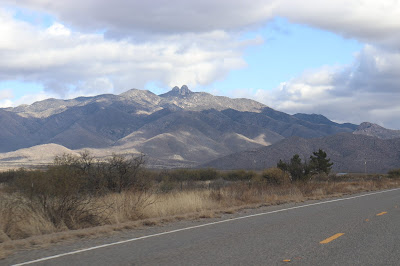 “I guess I love mountains,” I mused aloud, wonderingly, to the Artist.

“It’s something I never would have known about myself if we’d never come out here.” I went on, enlarging upon  my theme, the strangeness of surprises lying in wait in the self. “It’s like being predisposed to be allergic to something,” I went on, groping for expression. “If you’re never exposed to it, the allergy doesn’t get triggered. It never manifests.” Then my epiphany burst full-blown: “Love is like an allergy in reverse!” 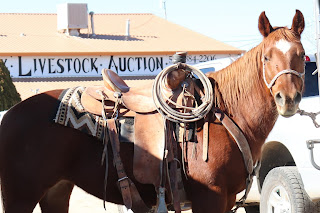 Strange notion, is it not? My darling might have argued with me, citing counterexamples to my claim,  different kinds of love and different ways of looking at love, but instead he agreed, understanding me instantly and perfectly, and I sighed and thought contentedly how fortunate he and I were to encounter one another so many years ago, giving our love a chance to be born when we might easily have gone a lifetime without it.

A more conventional way of expressing my idea, I realized a few days later, is to say that there is a contingency to falling in love, and I’ve known that for a long time. That which comes, over time, to feel necessary to our happiness — a partner, a child, certain places and activities — was not always so, pre-ordained by the stars. If we had never met … if we had not found Sarah that day at the Humane Society shelter … if my father had not studied French in high school and been stationed in France after the Liberation … if I had not been born to literate parents, with books and music in our house for as long as I can remember … if I had never seen a horse … if we had not gone camping on Lake Michigan when I was 12 years old … if, if, if … then I might not have had the opportunity to fall in love with David and Sarah and the French language and books and horses and Michigan. 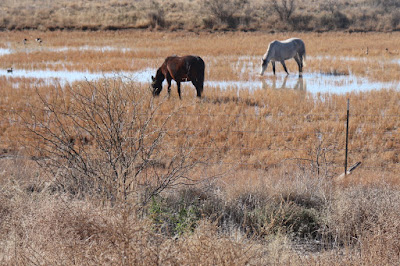 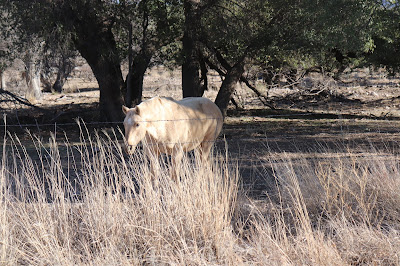 My friend and correspondent in New South Wales, Australia, for instance, also loves books and dogs (we share those passions) but has otherwise an entirely different set of loves from mine. She does not love horses and has never seen Michigan — and yet her life, too, is full, with many holds on happiness. 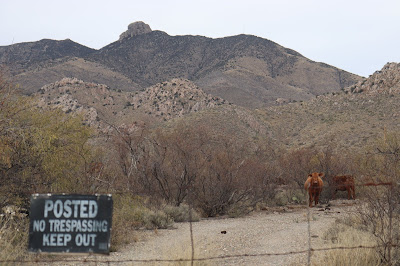 I’ve thought before, many times, of how the contingent in a life becomes necessary, but my thoughts were mostly terms of specific persons and places or, if in categories, familiar ones one might encounter anywhere, such as books and horses. Discovering in myself a love of mountains surprises me. For most of my life, I looked at photographs and paintings of mountains and remained unmoved, even while recognizing their beauty. It was beauty that had nothing to do with me, I felt. Really. I could look objectively at the most impressive mountain image and turn away with a shrug. It was not Michigan, after all. Perhaps the landscape of Mars is beautiful, too, but what has it to do with me? Surely no one can expect me to feel love for it.

And yet, somehow, where I least expected it, a new love has crept upon me, so gradually that I can hardly say when it began. I have learnt (as Henry put it) to love mountains. Mountains in general. The sight of them now makes my heart glad. I love that wherever we go in our winter neighborhood, we are surrounded by mountains — the Dos Cabezas, the Chiricahuas, the Pinaleños, and the Dragoons that separate our Sulphur Springs Valley from the San Pedro Valley to the west. 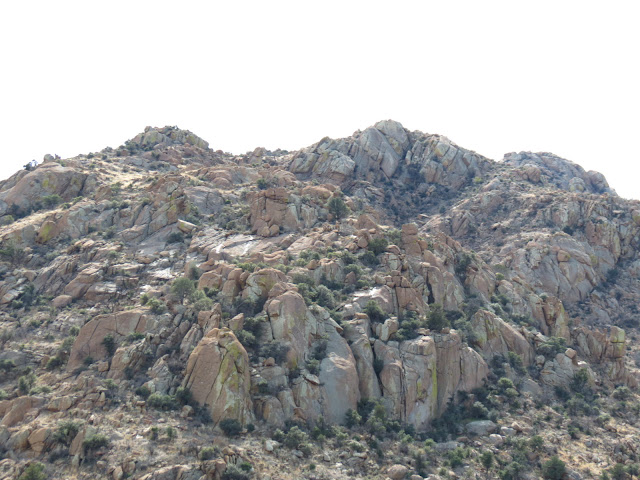 That is the generality of my new love, but the particular is even stronger. When, three miles or so from the New Mexico-Arizona state line, I discern for the first time the twin peaks of Dos Cabezas, then I have a feeling of coming home similar to what I feel when crossing from Indiana into Michigan. Closer to home in Michigan is catching the first sight of Grand Traverse Bay and what my friend Laura calls “the coming home tree,” that beautiful old willow standing against the water at the T intersection, and then turning left to re-enter Leelanau County. Similarly, here in Cochise County there is one long curve at last, my "coming home curve," the sight of my mountain and the land opening out below it, exposed rocks along the side of the road with prickly pear cactus and century plants against the rock face, and then a reverse curve as Highway 186 climbs up again, and there it is — the cemetery, the Dos Cabezas sign, the cattle guard, and the sign with the image of a horned cow, while up and to the left is the single cabeza that presides over the ghost town, over the Philadelphia Wash, and over our little winter cabin. 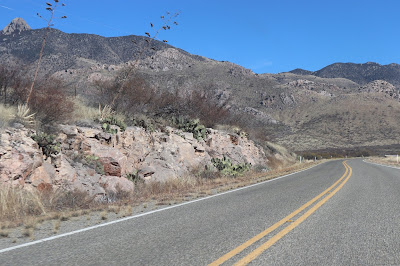 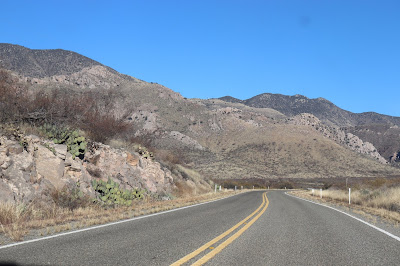 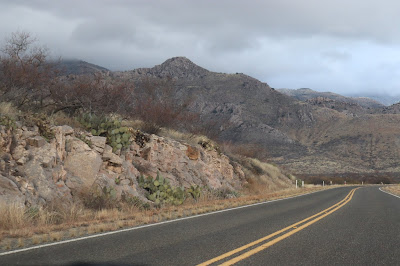 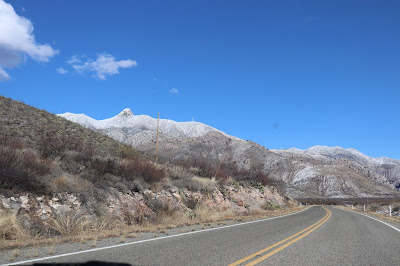 Yes, I now love mountains in general, but these mountains — this range, its distinctive twin peaks, and my peak in particular — are special. Not the tallest mountains in the Southwest, they are the mountains where my heart now feels at home. 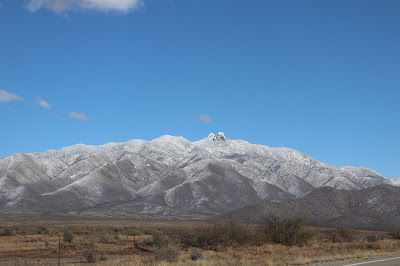 What will you open your heart to and fall in love with in 2019? A world of possibilities awaits....

I'm excited to think there might be somewhere I'll fall in love with in 2019. I generally fall in love to some extent to EVERY location I visit for any period of time. I'm always wondering what it is like to live somewhere. We were in the UP in November and it started drawing me in again to the point I went online looking at Real Estate. That's all that will happen, but I do that a lot as I drive through small towns across the country. I'm always looking...and of course Northport is high on my dream list. So is the SW. Sigh....

Dawn, we are like that, too. Sometimes, of course, we'll pass through or by a town that has no appeal, and one of us will see, "I don't see a new life for us here," but there are many places that call our names, if only for a few minutes or hours. I'm glad you find so many holds on happiness, too. Happy new year!

Looking forward to my second trip to Silver City, NM. Probably in late March or early April. Planning on many hikes in the Gila Mountain Wilderness Areas, plus many nights camping. Already thinking about possible meals. Have checked out your area on google maps. Will likely do some camping down your way. We got about 8 inches of semi heavy snow late this afternoon and evening. The kind of snow that weighs down the branches. Plan on getting out in the morning to explore and take photos. Happy New Year! Peace

I have no idea what will open my heart in 2019 but I know the possibilities are endless if I allow it to happen, if I'm open.
So glad you're in the mountains now Pamela!

Paul, I know that's you! We still haven't detoured up to Silver City, but it's a possible day trip for us, I guess. Maybe an overnight? But probably not until spring. Ah, yes, March and April! They are like summer in Michigan!

Deborah, you will be seeing new sights soon on your winter travels, so who knows what may take you by surprise?!

Steve, I do love that phrase in NORTHANGER ABBEY. Glad you like it, too.