As Our Schooner Rolled Along 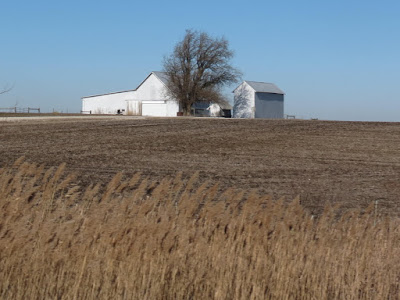 We set out  to cross the Illinois prairie on the diagonal. It was a bright, sunny morning on what might turn out to have been the last day of the second January thaw this calendar year as, not for the first time, I noticed differences between my childhood Illinois home and the Michigan I have called home for so many years.

Flatness is a big part of it. While southwest Michigan has prairie of its own, a gentle, rolling flatness usually broken up and bordered by woods, interior Illinois is planar in the extreme, and its cultivated fields lie pitilessly exposed to the horizon. Looking out on ithis prairie is like looking out over the ocean from a ship, and the exposed earth surface is usually interrupted only by farmsteads that constitute islands to the viewing eye, whether by day or by night, only rarely by a meandering line of trees indicating the presence of a river.

Prairie trees are different, too. If asked to state the difference in a word (and I was asked when I voiced the observation, which is what prompted me to search for a word), I would say they are shrubbier. Shorter than trees in the Upper Midwest, prairie trees are also more compact, with many small branches and a network of twigs. Each tree thus forms a sieve through which the prairie winds are strained. Trees here seldom offer heavy branches as sacrifices to the wind gods, and so they survive -- tough rather than stately. 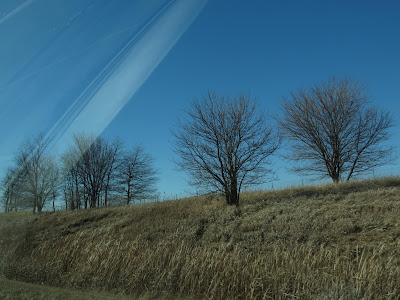 Along the expressway, stands of phragmites fill ditches and wave in the wind. I do not remember ever seeing phragmites when I was growing up in Illinois, so it must have moved in since my childhood. It has not taken over every inch, however, invasive though it is, for there are also large colonies of teasel, that thistle whose name we love to say. Teasel, teasel. Isn't it fun?

My fellow Midwesterners were not looking very good to me on that relentlessly bright prairie day that left our flaws nowhere to hide -- and I do intend that plural pronoun, for I was very conscious of looking no better than the rest. Dressed with two considerations, comfort and warmth, none of us had considered style for that day's prairie crossing. Covering ground was our big objective. At rest stops along the way, therefore, we all had the simultaneously keyed-up and overtired air of volunteers at the world's largest one-day yard sale. Instead of counting and talking quarters and dollars, conversations I overheard were of nothing but miles and states, everyone recalling epic trips from years past, trips made in younger days.

Without trying to spot them, I saw eight hawks in the course of the prairie day. Seven were perched, waiting for prey, and one in flight. Backlit smoke, like clouds and backlit grasses, held and magnified the sunlight. 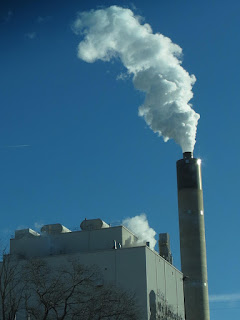 Oh good! You're on your way, have begun your winter adventure! It's going to be wonderful.

Getting from here to there is always an adventure and your reporting
always delightful. I'm looking forward to reading about your latest
expedition from Michigan to Arizona (perhaps from the Artic to the
Sahara?)

Thanks for joining me on the road, Gerry and Dawn. Today's hawk count was only five, but it was more startling: two perched, two dead on the road, and one on the margin between lane and median, talons in road kill, wings unfurled, either for balance or in preparation for attempted flight. Only a glimpse, but it was very dramatic. When I saw the first dead bird, David said it made sense they would be killed sometimes as they went after road kill, and the next one I saw was ON the road kill.

So glad you are healthy and underway! Hope your visit with your family was wonderful. Keep on writing! Love being along for the ride..

Barbara, I am enjoying a return to good health, but I was miserable for the first three days on the road. That could have been a whole post in itself, the isolating effect of a terrible cold, but I felt it had been done before. Anyway, I didn't want to dwell on it. We'll plan on happier topics!

Was the last photo taken here in Springfield? So glad you're feeling better and can enjoy your time on the road.

From the highway, Deborah, but probably not too far from Springfield. I hope your cough is better, too!