To my grandsons,
BILLY AND JERRY,
and to my granddaughters,
MARY JANE, SUSAN, AND JUDITH,
who can never know the joys of country living,
this book is tenderly dedicated 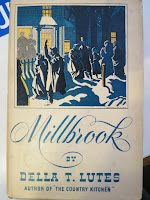 Millbrook was published in 1938 by Little, Brown and Company of Boston. Its author was Della T. Lutes. Born in 1872, Lutes tells in Millbrook the story of childhood as she knew it, growing up in a small southern Michigan country village outside Jackson, Michigan.

The town of Millbrook was on a north-south railway line and also on the turnpike running east-west between Chicago and Detroit. It boasted two churches, Methodist and Universalist, and one resident atheist, a hired man who worked on a farm on the edge of town. There was a school, of course, drygoods store, meat market, drugstore, barber shop, blacksmith shop, and one tavern. The depot, of course. Small as the town was, however, only men might loiter on Main Street.

...Women and girls, in that day, didn’t loiter along the street – even little girls. If you had business at the stores, you transacted it speedily and left. If an errand led you along Main Street, you went decorously past all public institutions, -- even including Lyde Peters’s notion store, where news was dispensed as well as necessities, -- your eyes frozen to the path your feet must follow.

Imagine, then, the curiosity of a little girl newly moved to town from the country, with a new town friend her own age! And imagine the embarrassment of the two little girls when Cory’s new, wild and brash sister-in-law from Detroit leads them not into one store after another but actually into the barbershop!

We hung back. In our most curious moments we had never dreamed of entering the barbershop. Women never went into the barbershop. It was a rendezvous for men – sacred to their masculine needs.

But headstrong Clara knew no restraint, natural or inculcated by family. Why ever had William married her? And why had she married a farmer, when she hated farm smells and the unexciting life of the country? No one could understand it!

Delly and Cory learn about life by hanging quietly on the edges of adult conversation whenever they can avoid being noticed. Perpetual debate over the character of Quint Sharp, the Atheist, for instance, enlivened many a gathering of village women. Was he a danger to himself and others or a better man than many a nominal Christian? Opinion differed. Sex came into local gossip only rarely, but when it did –

My mother drew back, shocked, startled, dismayed, mingled fear and disgust on her face.

Clara looked at me, surprised, evidently quite unaware of my presence up to now.

When Della Lutes was young “Delly,” there were no automobiles, not even bicycles or telephones, and yet news traveled around town fast.

About the middle of March, a postcard came from Gaby to Adelaide, addressed from Chicago, Lyde Peters [the postmistress] read it first and went out on the street and told every man in sight. Nell [Lyde’s daughter] threw a shawl over her head and ran to the drugstore to tell Ed Calkins. Ed said if Nell would go over and get Freda to come and tend the store he’d take the card right out to Adelaide. And by the time Adelaide had got her card the whole town knew its contents by heart.

Unlike citified Clara, Della and Cory found excitement plentiful in Millbrook. Spelling bees, pageants, picnics, visits from relatives, haying time, and the county fair were high points, but simple walks together and visits to neighbors provided interest enough for ordinary days. Berry-picking and meals were reliable pleasures. Della’s father took great pride in his strawberries, the best in town (though not quite up to those he had raised before on his larger farm). Chicken was the only thing to serve company, even though everyone had poultry of their own, and Thanksgiving wasn’t Thanksgiving without turkey, any more than dinner in general was dinner without pie for dessert.

The story of Millbrook opens with a description of the village (also given in visual form as map endpapers to which a reader can refer), and Lutes recounts the way she and her mother would sit out on the front stoop in the evening, looking down a gentle slope to the town to watch the lights come on, naming the houses as the lamps were lit.

Then, “That’s Miz’ Babcock’s,” we would say as the house on the corner mellowed with light. “There’s Adelaide’s” -- happily, as if a distant hand had waved a greeting. 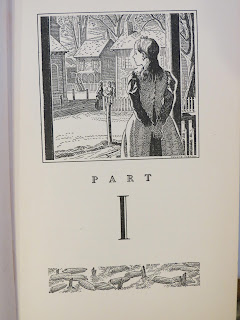 Joy is mixed with sorrow and anxiety in Millbrook, as everywhere. There is William’s unseemly and unaccountable marriage to the dreadful Clara, when everyone expected him to marry Jenny Myers, the blacksmith’s daughter, with whom he had “kept company” nearly all his life. Even happy events produce a bit of tension, as when Della’s maternal grandmother comes from Detroit for what seems almost a state visit. But the shocking news that Nell Peters has been “knocked up” and is claiming Gabey Reed is her baby’s father sets the whole town on its ears. Gabey’s leaving town suddenly is the next shock. When an old woman is murdered with an axe by the young man she has taken in and formally adopted, it seems the last straw.

Nobody had died except old folks and nobody had got married unless maybe one or two couples that had just got married and nothing to it. There hadn’t even been any special visitors to anybody’s house for a long time. The town had just run along like any country town and then all of a sudden everything happened at once. 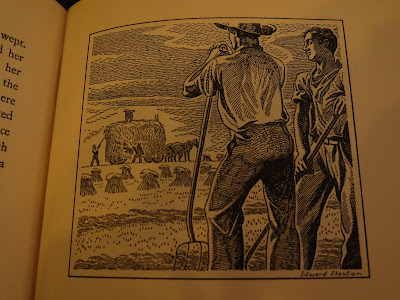 A reader is drawn in gradually to the life of the town and its families, eagerly following all these exciting developments as the memoir almost seems to turn into a novel, and yet it is the quiet tenor of the life of that period that remains the foreground. Work in the fields, a night hawk swooping at dusk, grass cut with a scythe, biscuits and gravy and mashed potatoes, fresh berry jam, all kinds of pickles, and picnics with real cloths spread on plank tables improvised for the occasion – sights and sounds and aromas and tastes are all here, lovingly remembered and recounted. The women sit and sew and talk –

... in their tight-fitting basques with many buttons, their full long skirts protected by full white aprons, their high-topped shoes, their ruches, brooches, breast pins, and thin old-fashioned wedding rings ...

and over and over, in chapter after chapter, Gran’ma Reed mourns the disappearance of her husband Gab’erl’s “Ledger,” in which he wrote every day’s happenings on their farm, beginning with the old log house built in 1835.

How will it all end? Well, of course it won’t, it didn’t, and it doesn’t. Generations of the families go on, and the land remains, despite changes wrought upon it. But what a gift it is, to have these memories of Della Lutes written down and published to allow us to visit life in lower Michigan over a hundred years ago! 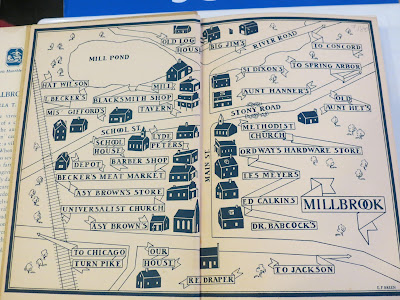 Bookseller’s postscript: The morning I wrote this I also did a load of wash and hung it out on the line, cut rhubarb, watered plants, and hauled brush from major tree pruning my husband and I had undertaken the preceding evening. We have electricity, a telephone, cars (too many--don't ask!), and my business is in the village, but we live continue to live a country life, and for that I am deeply grateful – and never more so than on a calm, sunny, green and lovely morning in June. 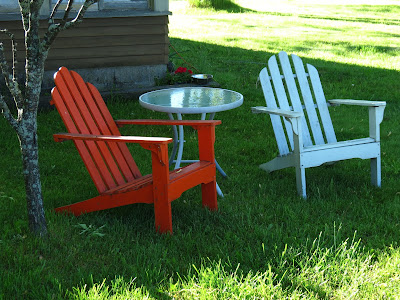