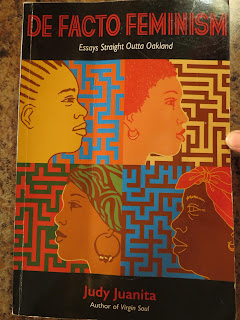 
In Virgin Soul, a novel set in the 1960s, the protagonist shared many of the author’s own experiences in terms of family, education, participation in the Black Party Party, and social activism in general. But a novel, even as it draws on an author’s own background, is fiction. De Facto Feminism: Essays Straight Outta Oakland is something different. This time we met Judy Juanita directly, face to face.

The essays in this book span the time period from the late Sixties to the present and include stories from Juanita’s life, her hopes and dreams, her strong opinions, and her unstoppable determination. There is honesty and humor here, along with bits of polemic, making for a complex mix that deserves to be read through more than once. Here are the first lines of Juanita’s introduction:

That tells a reader right from the get-go that no punches will be pulled in what follows, and no punches are pulled.

Juanita begins, easily enough, by recounting her growing-up years in East Oakland, a safe, friendly, middle-class neighborhood of unlocked houses inhabited by Portuguese immigrants, Mexicans, Mormons, and two black families, of which hers was the second on the block. (Her family was first on the block, however, to visit Disneyland.) Her parents were both readers, and her childhood world was a quite ordinary one of household chores, TV (all white faces, though, in those days), comic books, music, hide-and-seek, and backyard camping sleepovers, with occasional family expeditions to San Francisco. Despite the little heartbreaks that come to most young people in time, these memories read like a fairly idyllic American childhood, although as a child she took her family and neighborhood completely for granted, as fortunate children usually do.

I would not realize how fully, peculiarly and tightly loved I was until I left California – the state and the state of mind.

Growing up, of course, is only the beginning. There followed heady days of student radicalism and Juanita’s membership in the Black Panther Party. She served as editor-in-chief of their newspaper when Eldridge Cleaver went to jail.

My friends and I dropped out and worked in the BPP full time. We eventually returned to campus too, armed, not only with actual weapons, but with a new consciousness about education, service, the poor, the police and the military, oppression, and civil and human rights.

Along the way, Juanita had begun to write poetry, and when she quit a New Jersey job in straight journalism, she says, “I came to poetry when I was out on a limb.” She joined a group of others poetry writers and soon found herself reading in public and having work published. “Through contemplating my navel,” as she puts it with self-deprecating sarcasm, she won a fellowship and then, over a period of six years, enjoyed a series of short-term funded gigs teaching writing in New Jersey public schools. It was a stop-gap solution. But the inclusion of some of her poetry enriches this book of essays and helps us follow her development as a writer.

For a time, Juanita took on a job offered by a friend, cleaning condos, although her initial response to the friend’s offer had been,

Moi? A black woman with degrees, fellowships, travels abroad, a library of dictionaries within my library – a cleaning woman?

At one point she quit and took a temporary office job (for one-third the pay), but after four days she went back to cleaning, “where nobody called me Bertha, Beulah or Bessie,” and began to see her life and her strength more clearly than she ever had before.

Juanita’s evolution as a writer is an important theme developed in these essays. Through the years she pursued poetry, drama, and fiction, and when her agent asked why the humor he found in her conversation wasn’t evident in the novel she was writing, she decided to try for “funny” by attempting stand-up comedy. Approaching her comedy club gigs with the same strong work ethic she brought to writing classes, she learned what worked and how, but most importantly she learned about herself and the place of humor in her life and her writing. I’m not going to put a spoiler in here, though, to tell you what she learned! It’s in the essay, “Putting the Funny in the Novel.”

Blackness is another important theme. “The Gun as Ultimate Performance Poem” is guaranteed to stop readers in their tracks. Juanita had liked guns, she tells us, but “The Gun” is something else. Another no-holds-barred essay, “Report from The Front, i.e. Berkeley, CA,” makes clear the great racial divide all-too-alive, recounted in a series of maddening incidents.

The last ‘essay’ in the book stretches the meaning of the term pretty far, but by then I found myself going right along with it, in spite of the subject matter (Ghosts? Really?), thanks to the author’s dramatic skill in telling her story.

As I said in the beginning of my earlier review of the novel, Judy Juanita and I are of the same era. We both came from middle-class backgrounds, were both spelling champions -- and also suffered social trauma that same sixth-grade year. Inevitably, our paths diverged, as Illinois has never been California, and white and black Americans live in two different countries, anyway, in a lot of ways.

Personal essays, however, by writers of any era in any country, can invite readers into a writer’s life as effectively as autobiography or memoir. Temporarily inhabiting other lives is part of the magic of reading. That magic also, one hopes, can build bridges of understanding between people whose experiences of the world have been dissimilar.

Having read this book, I now want to read Judy Juanita’s plays, and I also want to read Carolyn Rodgers and Ishmael Reed. Multiple doorways beckon.

Another thing. I’m thinking of my own grandmother, my mother’s mother, in a slightly different way. Wasn’t she a de facto feminist, too? I feel strongly that she was, and I thank you, Judy Juanita, for coming up with this term. I hope you don’t object to my applying it to a dead white woman. Believe me, if you’d known my grandmother's life, you would agree that she deserved the title!