Musings on a Book: THE SNOW CHILD 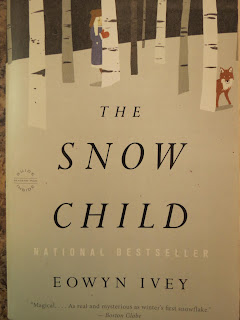 I don’t want to call this a “book review,” but I do want to write something about this lovely first novel, written by a bookseller colleague up in Alaska. We’ve never met. I know her only through her book, and not until I reached the end of the novel did I read “A conversation with Eowyn Ivey” and learn that she is a bookseller. There, when asked to tell a little bit about what energizes her, the author replied:

One of the reasons I left the newspaper business and joined Fireside Books [in Palmer, AK] is because I wanted more time and energy to write. What I didn’t expect is how stimulated I would be by the actual work of bookselling. To be constantly surrounded by all these ideas and stories and art!

The “more time and energy” part comes from being an employee, I guess, rather than the business owner, but I can certainly relate to the stimulation a bookstore atmosphere provides.

The Snow Child is a mysterious book. As readers, we are not sure, early on or even by the last page, whether we are meant to understand it as a fairy tale or realistic fiction, that is, a fantasy or a story with characters who could be real people in situations that life might present us with ourselves, were we to be transported through time and space to an Alaska homestead in 1920. The place feels real enough.

The morning was so cold that when Jack first stepped outside and harnessed the horse, his leather boots stayed stiff and his hands wouldn’t work right. A north wind blew steadily off the river. He’d have liked to stay indoors, but he had already stacked Mabel’s towel-wrapped pies in a crate to take to town. He slapped himself on the arms and stomped his feet to get the blood flowing. It was damned cold, and even long underwear beneath denim seemed a scant cotton sheet about his legs. It wasn’t easy, leaving the comfort of the woodstove to face this alone. The sun threatened to come up on the other side of the river, but its light was weak and silvery, and not much comfort at all.

The author’s inspiration for her novel was a used paperback she ran across by chance at Fireside Books, and what initially captivated her in the book was the role of place in the story. (Shades of Lynn Kimball!)

Growing up in Alaska, I’ve at times felt a foreigner in the pages of my country’s literature. All the books I had read and loved, but not one of them told of my home. The characters didn’t live the way we did. ... But the setting of the old Russian fairy [tale] was hauntingly familiar.

The paperback book led her to a fairy tale telling of an elderly childless couple who fashion a child out of snow. The snow maiden comes alive – and from there various versions of the tale spin out differently, but all somehow involve joyful childhood, love, marriage, and death.

In Ivey’s The Snow Child, the homesteading couple at the center of the story are in their fifties and childless, the sole pregnancy of their marriage having ended in a stillbirth. It was the loss of that infant that ignited Mabel’s desire to leave familiar surroundings, family and friends, to make a life in the wilderness that would encompass just the two of them. When Jack meets their nearest Alaskan neighbors, Mabel is initially reluctant to socialize. Making new friends and becoming known again is not why she came to Alaska. But somehow meeting George and Esther begins to thaw something in Mabel, providing an opening for fun and joy. Thus when that winter’s snow comes, she and Jack, at her suggestion, fashion a girl of snow.

In time the snow girl disappears, but so do the scarf and mittens. Human footprints, the size of a child’s feet, lead into the woods. Jack follows the trail but does not immediately share his discovery or his search with Mabel. He is uneasy.

As readers, we hardly believe the girl is real even after she comes to be a regular part of Jack and Mabel’s life. She comes to their cabin again and again, but she never stays, and no one else sees her. No one else believes a child could survive alone in the wilderness. Esther thinks winter’s isolation has made Mabel a little bit crazy. One day Jack and Mabel and the girl, like three children at play, lie in the snow and make snow angels. That will prove the girl’s existence to Esther, Mabel thinks, but by the time Esther gets around to visiting, the angel prints in the snow are no longer discernible.

Is Faina real, or have Jack and Mabel imagined her? We read on, expecting to receive a clear answer in time. As the girl comes to seem more and more real, however, the author somehow continues to keep us in a state of uncertainty, suspended between belief and doubt.

I love books, fiction or nonfiction, with women characters surviving in nature and pitting themselves against wilderness. Bonnie Jo Campbell’s Once Upon a River; L. E. Kimball’s Seasonal Roads; Down the Wild River North, by Constance Helmericks, and so on. In the early chapters of The Snow Child, while the girl (real or imaginary) was a creature of the wilderness, the role of Mabel, the homesteading wife, was pretty much restricted to housework. Then Jack meets with an accident while plowing, and while he is laid up their neighbors come to help Mabel with the spring planting. From then on, throughout and following Jack’s recovery, Mabel takes her part in the hard work of the farm.

...She had never understood how Jack could fall asleep in a chair without washing up, talking to her about his day, or even removing his filthy boots. Now she knew. Yet for all the sore muscles and monotony, the days of working in the fields filled her with a kind of pride she had never known.

They became true partners in the farm. As for the snow child, she grows up into a young woman, but what are we to make of her?

I don’t want to give any hints about Faina’s evolving role in the homestead and neighborhood world of this bit of wilderness Alaska, because you should not be deprived of discovering her world as I did, page by page. In the end, one thing you will know for sure is that you have been transported, carried on story’s wings to another world. Do you need more certainty than that?

And how delightful that the author is a bookseller! For me, that is icing on the cake!

Loved the book, and loved this piece!

So you know what I'm talking about, Barbara. Don't you think it would make a good book club selection, too?