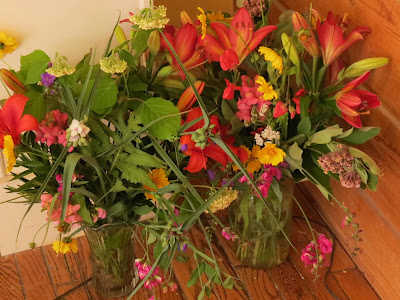 June slid into July, as it always does, and the march of mad summer blooms continues. Again on Thursday morning I was greeted by flowers on the bookstore doorstep. 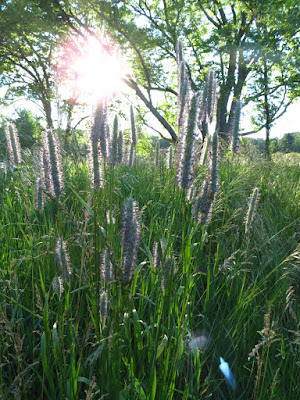 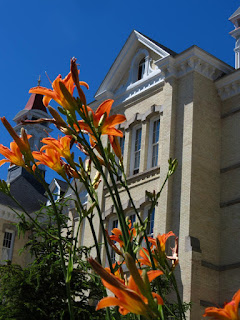 Bruce had come in to work for me on Wednesday, for the first time since last fall. Hallelujah! A day off for the bookstore owner! Naturally, I had a bookstore errand to run, an excuse for a morning drive down to Glen Lake, where I picked up the new book from Leelanau Press, Leelanau Trek: One Shoreline, Two Visions, a book about which I cannot say enough good things. That was exciting! We even made a brief dip into Traverse City.

I finished my reading of Samuel Butler’s The Way of All Flesh, a much livelier and funnier book than I had expected it to be. Our reading circle has decided to meet in August but without an assigned book to read and discuss. Instead each of us will bring something we want to share with the others. I’ll be sharing Samuel Butler.

A bookseller from Powell’s, out in Portland, Oregon, wrote a piece for the Huffington Post, and to every paragraph I wanted to shout, “Yes!” Here’s the link, if you’d like to read “Love and Bookstores” for yourself, because if I start quoting I won’t be able to stop. 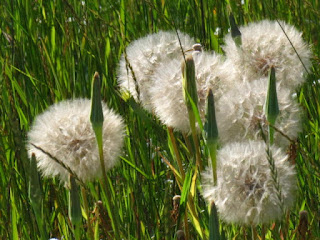 And then, as always, there has been the serendipitous picking up of the odd volume and finding treasure:

There are for each one of us, according to his turn of mind, certain books that open up horizons hitherto undreamed of and mark an epoch in our mental life. They fling wide the gates of a new world wherein our intellectual powers are henceforth to be employed; they are the spark which lights the fuel on a hearth doomed, without its aid, to remain indefinitely bleak and cold. And it is often chance that places in our hands those books which mark the beginning of a new era in the evolution of our ideas. The most casual circumstances, a few lines that happen somehow to come before our eyes decide our future and plant us in the appointed groove.

Who but Fabre, “the Homer of the insects,” would begin a book about wasps with a paragraph on the serendipity of book discovery? It was, admittedly, his way of introducing a monograph he had happened upon that set his mind in a new direction concerning the habits of wasps, but still – a curious mind, open to the discovery of whatever was nearby, guided Fabre’s learning about insects as surely as it brought the right books to his hands and mind. About my only disappointment in the trip David and I made together to France years ago was that Fabre’s house, now a museum, was closed for renovations the month we were there. Anyone wishing to visit the grounds, however, may do so by viewing the film “Microcosmos.” I recommend it highly.

Don’t forget that this Sunday Kathleen Stocking will be at Dog Ears Books from noon to 1 p.m., signing her latest book, The Long Arc of the Universe. I’m continually surprised to find there are people who have not yet read her first and second books, Letters from the Leelanau and Lake Country. In the car this morning, on the way to Northport, I thought of what I needed to tell those of whom this is true: “If you haven’t read Kathleen Stocking, you don’t know Leelanau County.”  So get started now! 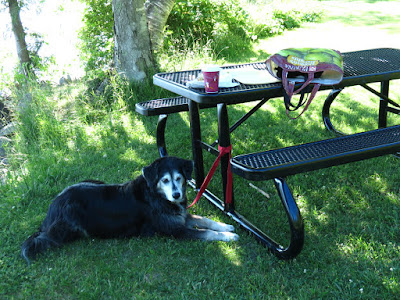 I am so far behind in everything. Guess that's what summer is all about. Camping, naps, weeding, all take away from reading. But I'll catch up eventually!