The Look and Feel of Summer's End (Letter to Ellen)

A friend here in Leelanau County asked if David and I had Grand Marais on our minds, after our long working summer. Well, of course. How could we not be U.P. dreaming as Labor Day weekend rolls around? Just this morning (Sunday) I finished reading your wonderful novel, South of Superior, for the fourth time, which set me to wondering how you and Rick are faring after your long working summer in the West Bay Diner. It was the perfect time for me to re-read South of Superior (although I’m hard pressed to think of what wouldn’t be a perfect time to read that novel), with summer drawing to a close and another winter staring at us down the gun barrel. Madeline’s story gives me courage. It isn’t “happily ever after” but taking one step at a time, dealing with challenges as they come along and enjoying every little joy life brings. It’s real life, the way so many of us live it.

This past week I also read one of the best self-published books that has ever come my way, Frozen Moon, by D. M. Greenwald, and wrote up a little review for the Northern Express. More later on this, when I get copies in the store by the end of next week, but I’m pretty sure you and Rick would both find Frozen Moon a gripping tale. I’m ordering Greenwald’s second novel, too, another fictional tale of rescue dogs at work. Michigan writer and former dog trainer Greenwald knows winter! 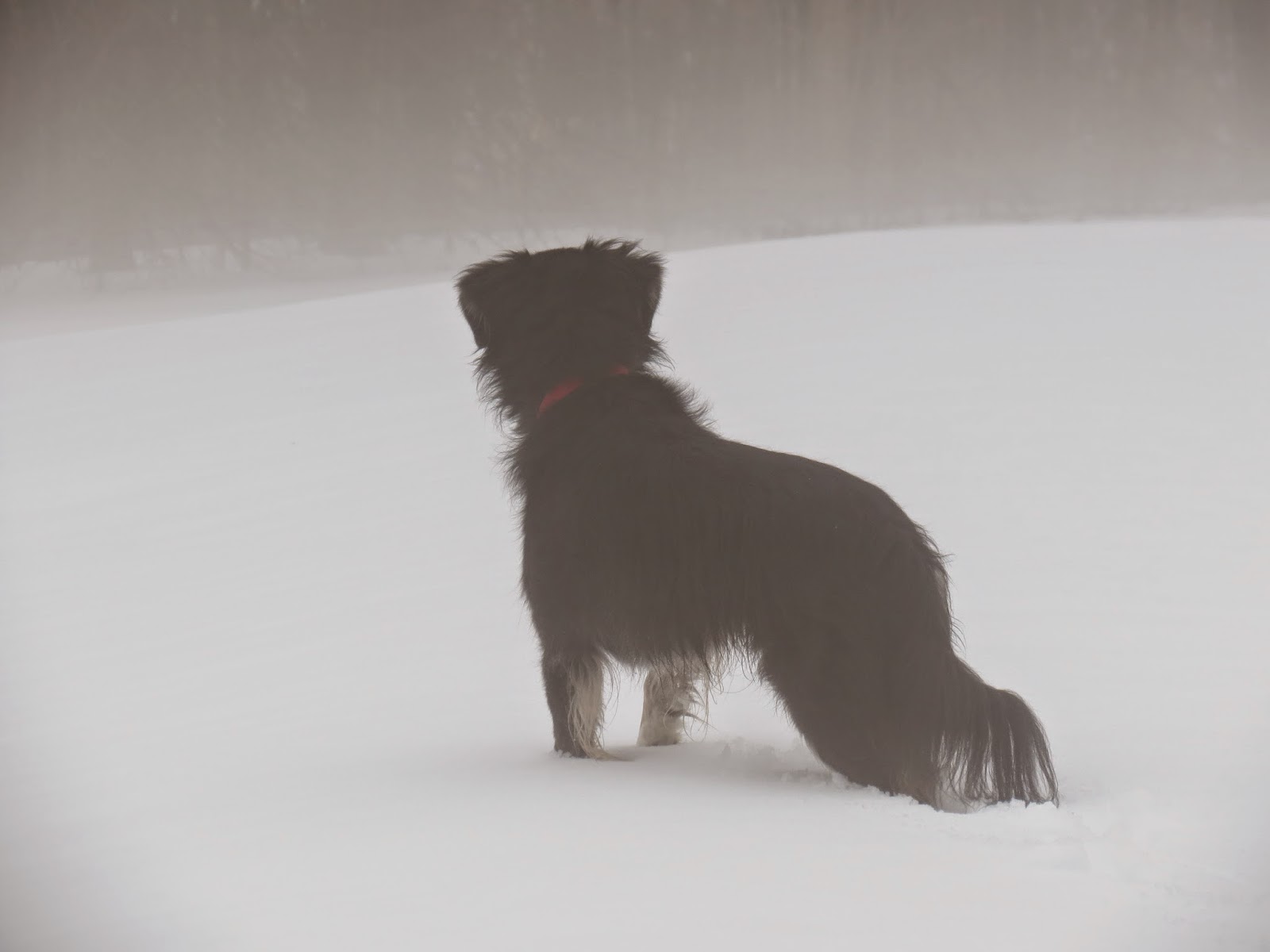 Anyway, as I started out to say before becoming diverted, I wish I could say we’ll be seeing you soon, but the September calendar is filling up fast, and there is a lot that needs to be done that is not yet scheduled. But you guys will understand that better than anyone else I know.

My truck, the one that broke down in Grand Marais two years ago, vastly multiplying the cost of that particular U.P. vacation, is going into the shop for brake work on Tuesday, but it’s okay, really, that the bookstore won’t be closing soon for a long vacation, because the third printing of the Ice Caves of Leelanau book only arrived last Wednesday. I’ll also be getting ready for a fun book event with Lynne Rae Perkins, who will read from and sign copies of her new book, Nuts to You, on Friday, September 19, from 5 to 7 p.m. And, of course, the second Leelanau UnCaged street fair, with art and music throughout the village, is scheduled for Saturday, September 27.


And that’s only the Northport side of life. Projects on the home front also clamor for attention. But you know how that is, too, don't you?


And yet, astonishingly, we have managed a couple evenings out. We went to the annual Sousa concert on Saturday night at the Northport Community Arts Center, and it was fantastic, as always. David and I were commenting to each other how far the village band has come since its first days. Ken Bloomquist got it off to a great start before yielding the podium and baton to Don Wilcox. Both Bloomquist and Wilcox brought years of university band conducting to Northport. Saturday evening’s guest conductor, on his third working visit to Northport, was another accomplished musician. Director Emeritus Colonel John R. Bourgeois, USMC (retired), who was the 25th director of the U.S. Marine Band from the Eisenhower Administration through Bill Clinton’s presidency. Little Northport! Astonishing!

(David commented that the band in its long-ago first year sounded “like a high school band.” Ha! Maybe like your high school band, I told him, but not like mine. Now they sound like my high school band! I played violin in the high school orchestra, not band, but our entire music program was outstanding in Joliet, Illinois, in the 1960s. During Saturday evening’s concert, I thought several times of fellow blogger Dawn King and how much she would have enjoyed being in the audience – or onstage!)

And earlier in the week we’d gone out to the movies, something we don’t do often. “The Hundred Foot Journey” at the Bay Theatre was all I’d hoped it would be. I recommended it enthusiastically to friends who went on Friday night and were not disappointed. Where is the nearest movie theatre to Grand Marais, Ellen? 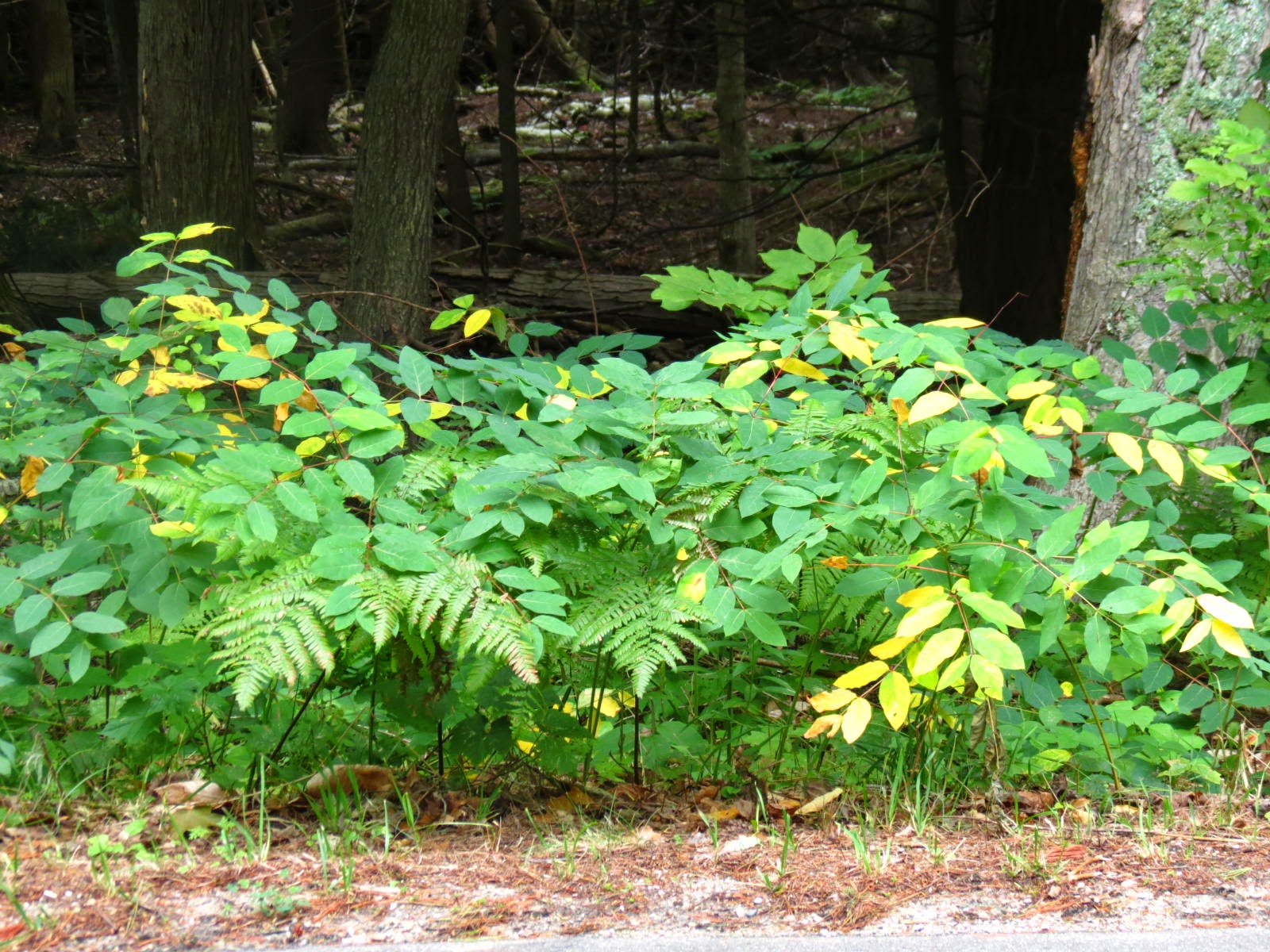 What else? Oh, take a look at this modest little plant (above), turning from summer green to fall gold. I see it along West Street when I come the back way into town, and it never fails to remind me of Seney, where I first noticed the plant. But what is it? Do you know? I would be glad to be informed.

Oh, and after pulling all those wild grapevines and other weeds in the pile above, we took a lunch break at the Narrows -- a vacation hour in August! Nothing is more peaceful than waterlilies, don't you think? (Do you think? Which?) 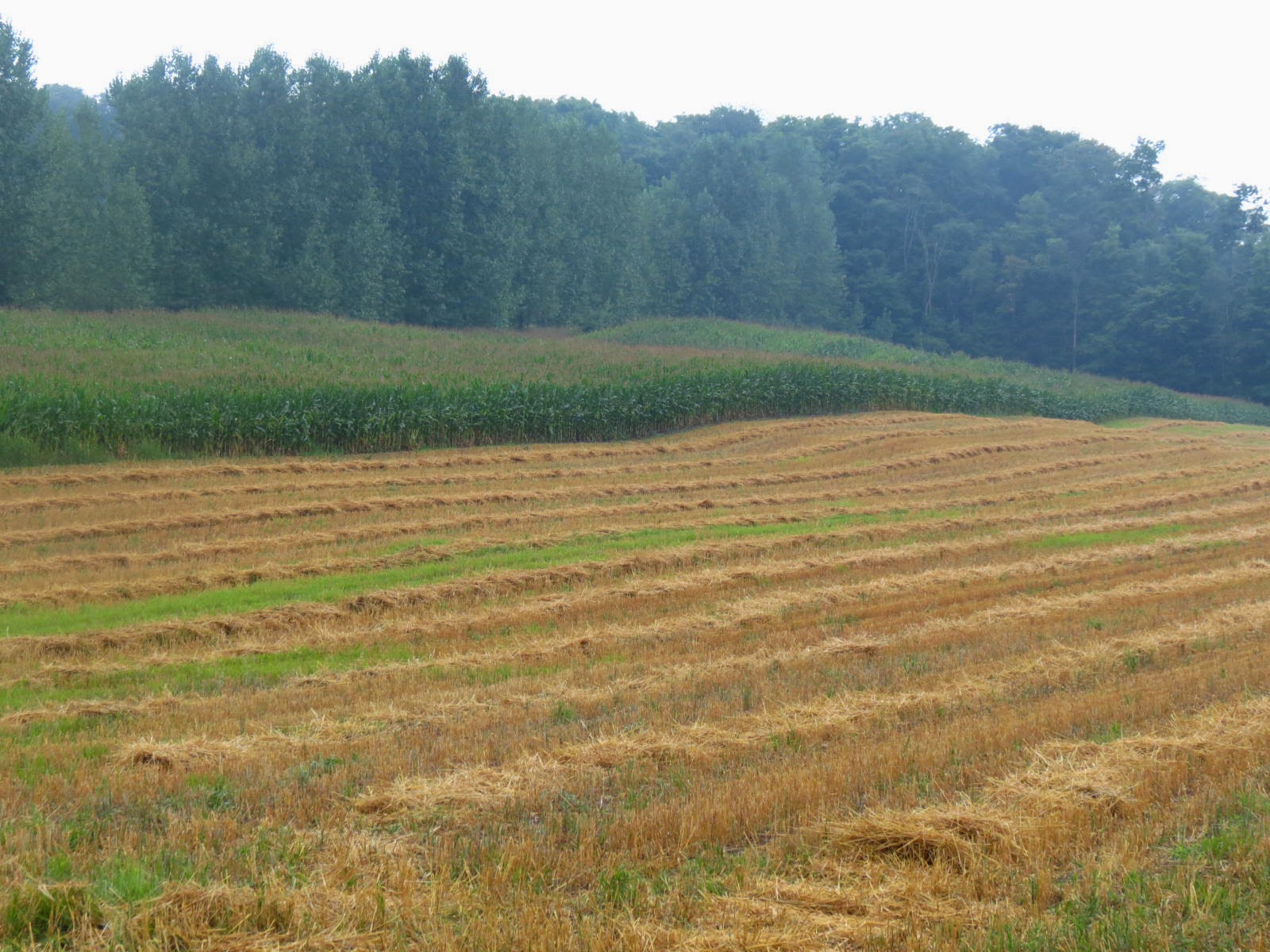 Yellow-gold straw is being cut and baled on the back roads in Leelanau County. Goldenrod blooms along roadsides and across fallow fields, and in low spots Joe-Pye-weed has come into its own. No asters yet. They are still to come. In my meadow at home, for now, coneflowers reign supreme. 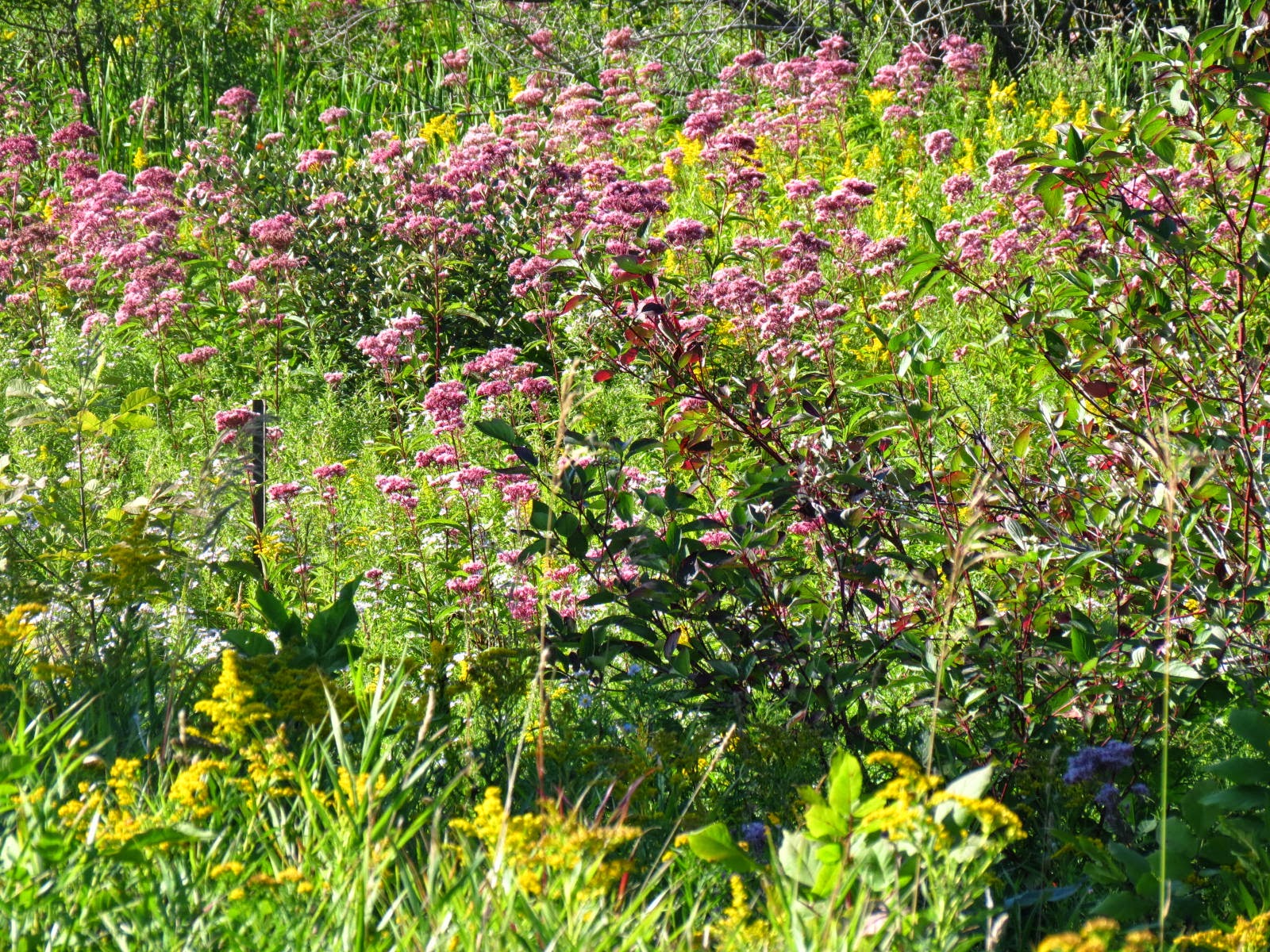 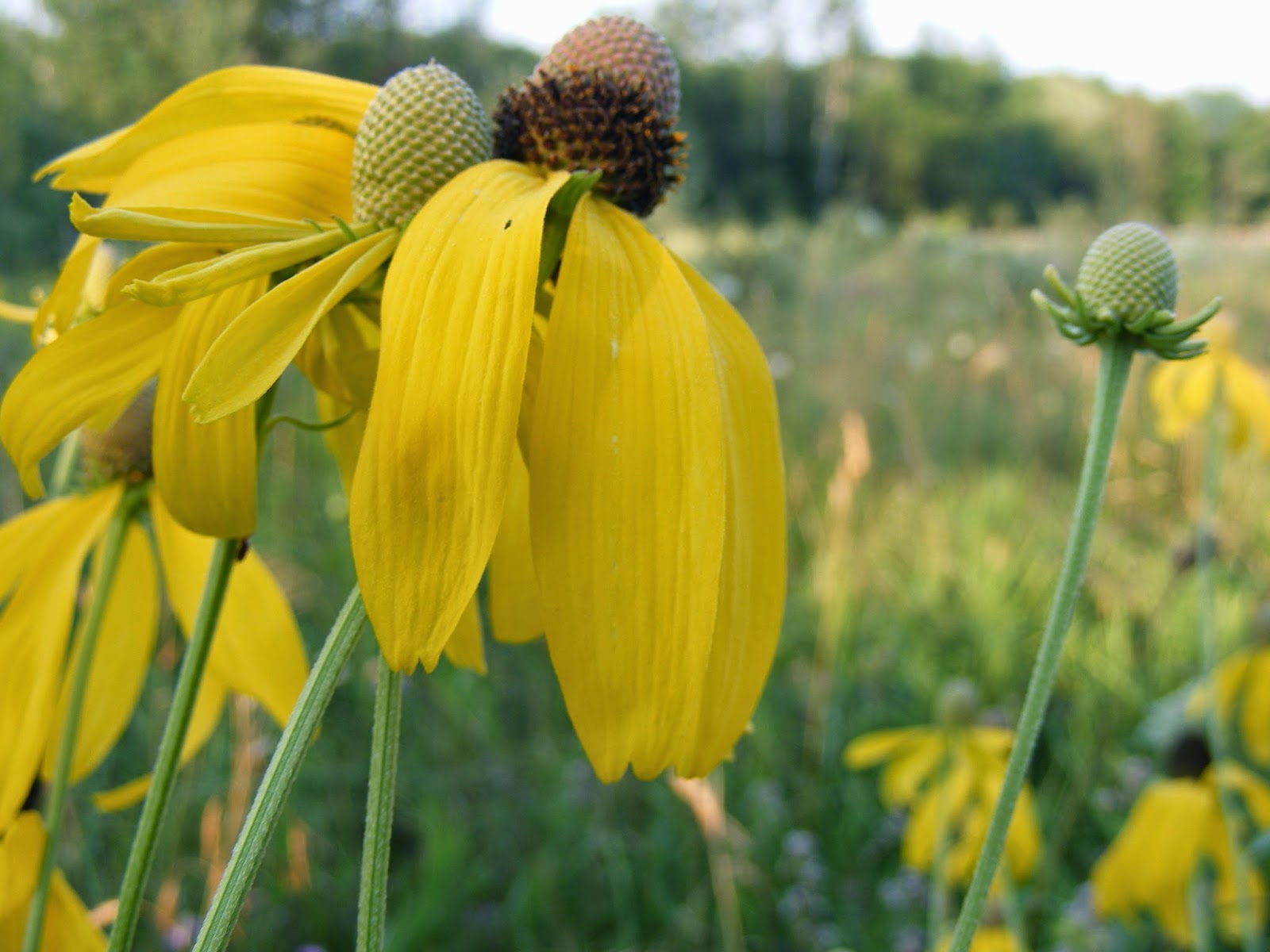 For teachers, this is the time of year that life speeds up, but for those of us in business in tourist areas, a considerable slow-down coincides with cooler nights and mornings -- and doesn’t it always feels as if we couldn’t have gone one more week at summer’s pace? Not true, I’m sure. I think it’s being in sight of “the barn” that brings on the exhaustion, and if we knew we had another month to go, we’d summon up the resources to handle it. Oh, but it’s delicious, the feeling of September coupled with not going back to school! 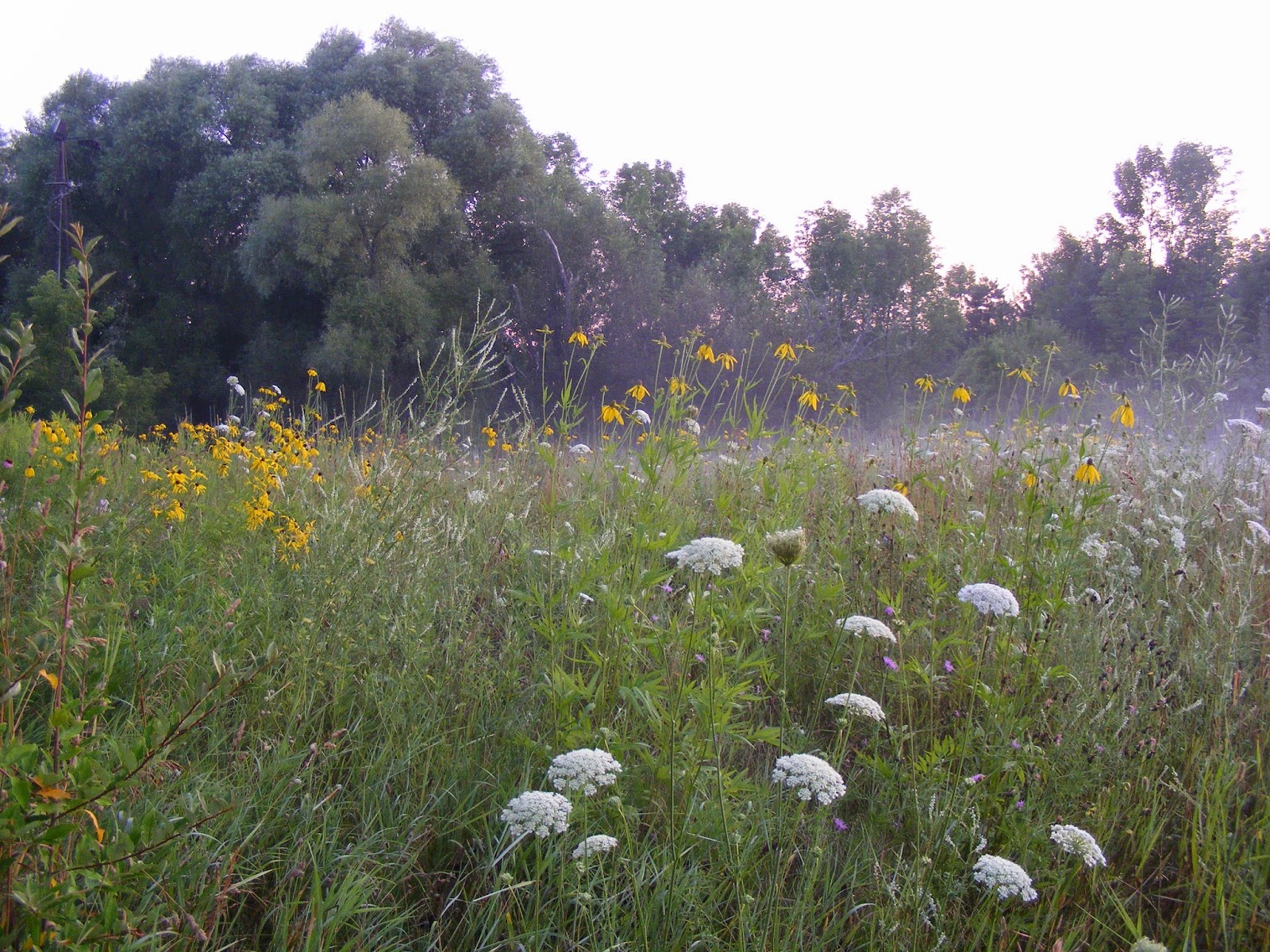 There's never enough time with friends, but you are on my mind more than you know.

Very sweet, Pamela. But I'm surprised you and David are not heading to Grand Marais this week. I understand, however, as you explained. Maybe a fall trip north will be in order for this year. Karen

It might be a letter to Ellen, but it lifted my spirits considerably, too. The pictures are beautiful as well. When you talk about your bookstore, it makes me want to settle down in a big, comfortable chair and read. I wish we had such a place here in Eastport. The nearest bookstore is in Calais, about 45 minutes away. It's a great place, but I hardly ever get there.

I like to read novels mostly, though "The Immense Journey" is certainly one of my favorite books. Right now I'm reading "Charms for the Easy Life' by Kaye Gibbons.I found it when I was cleaning out one of my too-many book cases and remembered reading "Ellen Foster" years ago. Apparently I bought this one for that reason. Tastes change over the years, and I don't think I'm enjoying this one as much. Nevertheless, it's a place to put my eyes when I want to look into a world, a life, that isn't mine. I remember being absolutely obsessed, or possessed even, thirty years ago (holy cow!!) when I was obsessed with "...and Ladies of the Club." I lived in that book so completely that whenever I looked up from the page I actually expected to see horses and carriages through the bay window. We lived then in a beautiful old house, built in 1845, across the street from a large city park. Both had been there since Bangor's rich lumbering industry was at its peak. That atmosphere made it so easy to imagine women in long skirts and men in top hats.There was a lot of civil war era history in that book. I sometimes read all day,still in my nightclothes, until I was jolted into the present by children coming home from school. Afterwards, over the many weeks we drove around the country on our family camping trip, I drove my husband and two pre-teen kids to distraction with my tales and details about every Civil War battlefield we visited.

Anyway, since I read "The Cat's Eye" I've been disappointed by many of the memoirs I've red. I'm mad at Margaret Atwood for abandoning me by turning to that stuff she's into now. I guess I could have seen her interest in that kind of thing when I read "The Handmaid's Tale." I've found some that I love, though. Also where is Alice Thomas Ellis? She collapsed after she left the Catholic church, after her son was killed. She's dead now, though, so I guess I can't expect any more from her.

So, thanks for taking me out of my funk, albeit briefly.

Cheri, I know exactly what you mean about being lost in the world of a book and feeling that you're living in another place and time. A SUITABLE BOY, by Vikram Seth, certainly did that for me, and I highly recommend it. That was a novel, but a travel memoir that did the same thing was Primo Levi's CHRIST STOPPED AT EBOLI.

I'm so happy that I was able to lift your spirits even temporarily. A comment like that tells me I'm not wasting my time writing a blog. Hugs!

Dear Pamela,
What a lovely letter. Thank you! I will write back soon.
Love,
Ellen

Pamela, what a great way to tell us all (And thanks for sharing Ellen) about your time up north. You sound busy and happy. And yes I would have loved to have been in the audience or even on the stage for that concert! Our season starts tomorrow. I can't wait.

The plant was definitely dogbane. A botanist customer put me onto the tell-tale clue: break a leaf, and a milky white sap is the identifier, dogbane being in the milkweed family.

Now fast-forward to early October and see that we DID get up to Grand Marais, after all.