"Thank God I Am a Bookseller!" 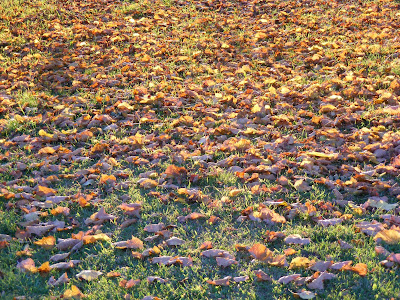 The day dawned bright and clear. Even fallen leaves on ground looked warm and happy. It was the day of our celebration of The Windward Shore and 18 successful years of Dog Ears Books. Hours later, after much preparation and what seemed like endless waiting, a little before five o'clock the guests began to arrive. 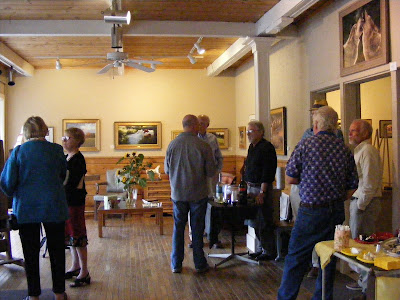 And then--hooray!--our guests of honor, author Jerry Dennis and artist Glenn Wolff! What an honor to have them in Northport! 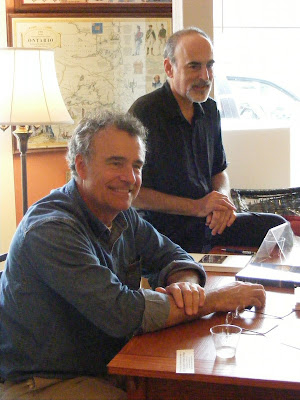 Okay, I confess. I almost forgot to take pictures at all. I had completely forgotten to plan out a little speech ahead of time and flubbed that royally, and once again I failed to ask anyone to take a picture of me with the guests, so I can look back and know that I was there. Still, I did get a few shots. Here are a couple that particularly please me. The first is of Jerry Dennis chatting with artist Char Bickel. 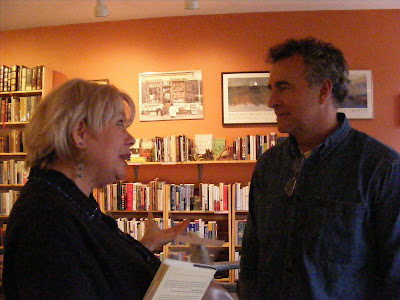 Char has a show going on right now at the Watershed Center in Greilickville, by the way. Don't miss that!

And here's Glenn Wolff adding a priceless sketch to the title page of Jerry's book, which he illustrated. 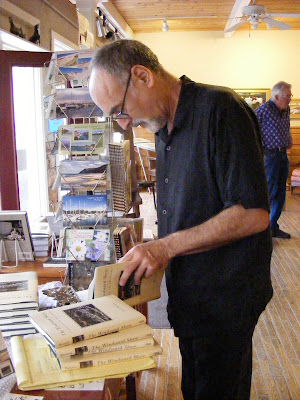 There were other writers and artists in the crowd, some all the way up from Traverse City. Very gratifying! Thanks to everyone who joined us, whether from down the block or around the Bay!

This morning I had an e-mail from Jerry, saying that he and Glenn had driven back to Traverse City last night in a "nice glow from the warmth, welcome, and compliments extended by so many of your friends and customers" and that he hoped we could do the same thing "again and again" and that Dog Ears will have many more birthdays. I have to say that I am overwhelmed by the genuine generosity of artists and writers, the support they show for one another, the concern they have for the public (including their bookseller friends), and the dedication they bring to their work. My life has been immeasurably enriched by such contacts, thanks in large part to my bookstore.

And so, in closing today, here are the words that writer Christopher Morley put into the mouth of his unforgettable character, Roger Mufflin, proprietor of the Haunted Bookshop in Morley’s novel of the same name:

Thank God I am a bookseller, trafficking in the dreams and beauties and curiosities of humanity rather than some mere huckster of merchandise.

I think a great many people (errr, readers) think that being a bookseller would be a grand occupation. You have shown us both the benefits and challenges. Your writer's comment: "nice glow from the warmth, welcome, and compliments extended by so many of your friends and customers" sounds wonderful.

Hi, Kathy. Your phrase "challenges and benefits" is right on the nose. Making a dream come true is a lot more work than simply having a dream, and then there’s keeping it alive after you’ve made it come true! Well, at this stage of life I have no regrets, and I think that i my very modest way I have been true, without anyone advising me this way 18 years ago, to the words of wisdom Steve Jobs gave the graduates when he told them to “Stay hungry, stay foolish.” Have you seen and heard that speech? It’s worth taking the time to follow in its entirety:

There cannot possibly be anyplace more enjoyable than Dog Ears Books during a signing party--unless it's a signing AND BIRTHDAY party. Congratulations on 18 years of regret-free foolishness, feeding the book-hunger of the North Country.

Thank you, Gerry. And, as you well know, Jerry Dennis's books are nourishing, substantial fare.

Well I say thank God you are a bookseller too..and that you go to all the trouble to share these experiences with the rest of us! Glad it was fun and successful and happy and warm and glowing. :)

Congratulations on all those many years!

Congratulations on your bookstore birthday and another wonderful event!

Thank you, Dawn, dmarks and Ellen for your congratulations and your encouragement. It means a lot to me--more than you know.

MIFFLIN! How could I spell the character's name wrong?!