The Competitive Side of My Life, or, How Could This Possibly Happen? 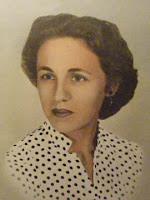 “Who helped you study for a spelling bee when you were a kid? Your father or your mother?” David asked last week. Both my parents were sticklers for proper English, but it was my mother who grilled me on spelling words. (My father got stuck trying to help me with math, a very different story.) My spelling fame peaked in sixth grade, however, when I went down on the word ‘hypocrisy.' Never having heard the word, I used the word ‘democracy’ for a model and got as far as H-Y-P-O-C-R- before going down in flames. But that was after all the other sixth-graders were already down, so although I was not recognized as such, I do feel I was the All-City Sixth-Grade Spelling Champion for Joliet, Illinois. Some eighth-grader must have won the crown--I mean, title.

It was in 2007 that I heard about the Senior Spelling Bee in Traverse City, in which teams rather than individuals compete. Each team member must be at least 50 years old. It sounded like fun, and I was surprised how many people turned down my invitation in horror and fear, throwing up their hands and stepping back from the very idea of a spelling bee, until my friend Marilyn agreed to join me. The next year Trudy signed on, and we were three. And we have a good time at the Bee every year.

That’s not to say there isn’t a competitive element, however, and as the Dog Ears team has always finished in the top three, when the field had been whittled down to four teams last Friday I felt a slight quiver every time the Bee Master called, “Team 7.” My teammates are—it’s true, my friends, and you can’t deny it—more competitive than I and would not be happy to finish “out of the money” (no, there’s no money involved), and so I relaxed when the fourth team was spelled down after ten (!) error-free rounds. We’re home clean, I thought then, because whatever happens now is no big deal. We finished third in 2010, and we were fine with that.

So what happened in 2011? The third team went down, leaving us to face off against last year’s 2nd-place team. Okay. Do you know how that works? When a spelling bee gets down to the last two contestants, be they individuals or teams, the rules change. After an error is called, the competition must first correct the error and then correctly spell a second word to win. In principle, many errors might be made without ending the bee, if you can imagine how that might go. Well, in this case, when the Bee Master told the other team they had incorrectly spelled a word our team went with the only possible alternative spelling we could muster up, though it was not the first spelling two of us had come up with. We were told we were correct, and we were given another word. We spelled the next word correctly, were acclaimed winners and were congratulated by the team we had beaten. Ordinarily, this would be the end of the story.

But at home that night I looked up the word that had knocked the other team out and discovered that their spelling (the way I would have spelled it, too, had the word come to us first) had been correct! K-O-H-L-R-A-B-I. Oh, good heavens, now what? I called the Bee Master on the phone, and I think it’s fair to say he was flummoxed. (‘Flummox’ was another word in the Bee that day, one that put a team out of play.) “I think they won!” I told him, “they” being Team 1, Nancy and Cornelia. But no, said the Master, neither team had a clear win, since the winning team must (1) spell correctly a word missed by the other team and (2) spell correctly an additional word. In fine, the Bee had never finished!

And so it was that an impossible outcome came to be declared—a spelling bee ending in a tie! Any other ruling would have been a miscarriage of justice. And here they are, our fellow champions: 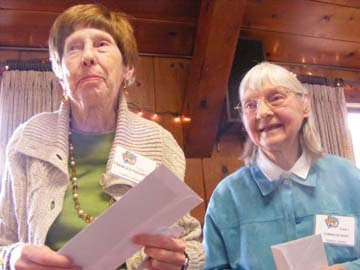 “Oh, well,” one of my teammates said, “our win was great while it lasted. And next year the competition will really be intense!”

I think the pressure on the judges will be intense next year, as well. All in good fun, of course.

Kathy from Australia asks me if adult spelling bees are a national phenomenon in the U.S. I don't know. If they're not, they should be. I can imagine independent bookstores starting up bees in towns where they don't exist, book clubs putting teams together--all sorts of good fun and brain calisthenics. Did I spell that word correctly?
Posted by P. J. Grath at 4:53 PM

It's been a year for Judging the Judges. Wonder if it will spread so far that we begin to pay attention to the antics of the Michigan Supreme Court?

Not at breakfast of course. Sorry.

No one is immune to error, and the Bee Master acknowledged his gallantly. I'm not sure how the role of the judges is construed at this Bee.

Michigan Supreme Court? Has there been a recent development or are you making a general observation, Gerry?

I would be too terrified to think, much less spell. Congratulations on pulling a tie out of your hat...or brain...

Now there, Dawn--that's how so many people react to the idea, and I can't figure out why. A lot of not being disqualified early is the luck of the word draw, and it really is a fun day. My friend Trudy has had her husband bring their grandchildren to the event for three years.

we react this way because spelling is HARD without spell checker...lol

Okay, some words are hard to spell, but I don’t trust spell-checking programs all the time, either, just as when I use a calculator I have to double-check with paper and pencil. But no more confessions of this kind, or you’ll think I’m insane.

Michael, you dealt with it beautifully. I guess we should all expect that next year will be even more EXCITING than usual, eh? Can't you just picture all the audience members with dictionaries in hand? Yours, of course! Thanks for the resolution.