Again with the Serendipity! 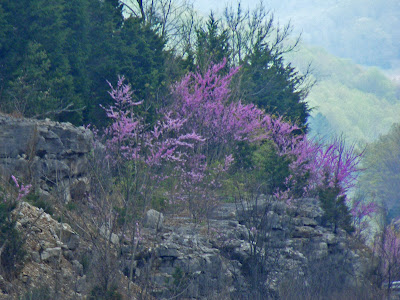 David and I do not set records when it comes to distance covered in a day’s driving. Today, for example, setting out from Chattanooga in a pouring rain, we missed an exit and found ourselves going in more or less the right direction (north) on the “wrong” road--not the road we’d planned to take, that is. But it wasn’t a bad road, and the traffic was lighter, so we decided we might as well stay on it until we reached I-40 and could backtrack to the west. All was well, and we were almost to the interstate when I suggested cutting back on a connecting road rather than following the narrow wedge farther east than we needed to go.

In the Cumberland region, all major roads and rivers run northeast-southwest, so that cutting across from one to another means climbing and descending the intermediate ridge. We found ourselves climbing a narrow, winding mountain road, rock rising up and out of sight into the mists on our left, plunging steeply down and away and disappearing below on our right. Huge boulders looked as if they might let loose any moment. Then came a little mountain community, a tiny cluster of stores to serve the nearby mountaintop farms. It was 68N from Spring City to Crossville, through Grandview and Grassy Cove. "I would have taken this road intentionally if I'd known about it," said David.

I know I’ve written before about taking an unexpected little road and finding a magical place. It’s happened to us before, and it happened again today, but it wouldn’t have happened if we hadn’t made a mistake, if everything had gone according to plan. We didn’t stop along the way, so I don’t have pictures of that mountain road. Sometimes the heart and mind must take the only pictures. 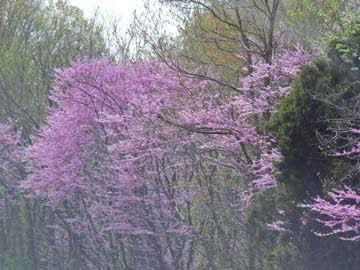 Thank goodness for those little mistakes which bring us to life's little unexpected pleasures! (Think if we could remember this daily...not just when we're on the road.) Happy traveling with redbuds. Only go slow. Snow at home.

Kathy, your parenthetical remark made me stop and think. Get lost and meet new roads. Ask questions, not necessarily only when traveling, and make new friends. One of the drawing books I read this winter also made the point that what we first see as our mistakes may lead in a new, fruitful direction. In missing an expressway exit, have we stumbled on a metaphor for living?

In my life it's not so much a metaphor as a description. Ah well. The redbud is lovely. The South does spring well. We do not. I recommend you linger there another few days.

A month ago, everyone was urging us to come home early. Now we're on the way home, and everyone says not to rush. Finances dictate! Motel nights to a minimum! Onward and northward! We'll be leaving the redbuds behind today.