Thought for the day:

Varnish is drying on paintings. Ten boxes of books are packed. Strong winds have been tearing at the coast for 24 hours and are still at it, and the furnace came on a couple times during the night. We will leave before the cold front, so it’s time to pack up the warm-weather garments of a fairly contented winter and prepare to re-enter the zone of real winter, because while the calendar says spring, the TV screen last night showed flurries in Detroit, and we’re going farther north than that.

For all these weeks, turning off Hwy 19 onto Aripeka Road has reminded me, every time, of turning off M-22 onto Setterbo Road in Leelanau County. It’s a slowing down, leaving behind the hustle-bustle world and re-entering the quiet, green world of home. Won’t Sarah be surprised to see the farm again? I can hardly believe it myself!

What I Will Miss

Sunrise over Hammock Creek…sunset over the Gulf of Mexico… flight of herons…the mystery of tide coming in and going out…Carl Norfleet’s friendly face and greeting…visits from Weiser and Ida…having all the time in the world to read and write…espresso at Paesano’s…gyros in Tarpon Springs…meeting people and pets at the dog park…the warmth of the sun…bright colors...long, restful views over the sawgrass…. 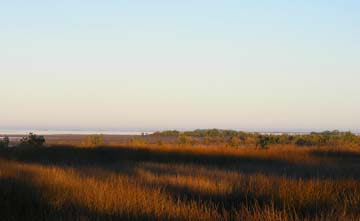 My thoughts on this book began as an e-mail to my son. Ian, I know you read the blog (even though you don’t like the word ‘blog’), so I hope you won’t object to sharing, with people you don’t even know, what is still, first and foremost, a letter to you, since it has always been a joy to me that you and I share these interests, even though we often disagree.

I bought my paperback copy of The History of European Liberalism back in February, I think, at Poe House Books in Crystal River, but somehow other acquisitions from Poe House and elsewhere claimed my attention first, and as acquisitions have continued through the season, It was only Sunday morning, sorting and meditating on packing all the many books I've bought, that this one came to have its turn with me. After a walk with Sarah, cup of fresh coffee in hand, I sat down on the front porch and began to read the translator's preface. Well! You know the feeling on the first or second page of a book when you become so excited you can hardly bear to sit still and read the sentences in order?

Liberalism, as Professor de Ruggiero understands it, begins with the recognition that men, do what we will, are free; that a man's acts are his own, spring from his own personality, and cannot be coerced. But this freedom is not possessed at birth; it is acquired by degrees as a man enters into the self-conscious possession of his personality through a life of discipline and moral progress. The aim of Liberalism is to assist the individual to discipline himself and achieve his own moral progress; renouncing the two opposite errors of forcing upon him a development for which he is inwardly unprepared, and leaving him alone, depriving him of that aid to progress which a political system, wisely designed and wisely administered, can give.

You see what I mean? Collingwood's preface is only two pages, the second page not even full, and yet he commands attention with this distillation of the essence of de Ruggiero's thesis. Then the translator, following the author, poses the crucial question, whether political freedom is

…destined to disappear, crushed between the opposing tyrannies of the majority and the minority, or has it the strength to outlive its opponents?

Such a question, posed in such a way, is not one I can resist. The recent political history of our own country--here I detour from exposition of the book in question to my own personal opinion--not excluding the nominally Democratic administration of Bill Clinton (and that’s how I think about that), enlarged the protected interests of a tyrannical minority, those with the greatest financial power. Voices today most fearful of Obama are afraid that his administration will bring about a shift to a tyranny of the majority under socialism. I do not share the fear. President Obama is neither foolish nor ignorant. Socialism has had its trial and has failed, as he well knows. But so has laissez-faire capitalism, government by financial might, been tried and found wanting, as he also sees. To fear one danger is no reason to run into the arms of another, equally great. The disguise of the false dilemma is shallow, but the trap is cunningly laid by our own minds, yielding so easily to the temptation to divide the world into binary oppositions.

I do have hope that we Americans, as a people, under a wise leader, are beginning to see our way through and past simplistic fallacies. But what a breath of fresh air to come upon this book, now, at this time! It was over 90 years ago that de Ruggiero saw true Liberalism not as a weak compromise between the two positions he identifies as tyrannies (which we might call laissez-faire and socialism) but as the only possible ground for true political freedom, the path avoiding the pitfalls of both extremes.

Seduced next by the table of contents, my eye running down the list of chapter headings, I saw, almost at the end of the book, “The Crisis of Liberalism,” broken down into economic and political aspects. Handily (for a reader who begins at the wrong end of the book), the author begins this section with a recap of the development European Liberalism, one form was based on land, the other on industry. Land-based liberalism, he argues, is threatened when industry takes precedence over agriculture, diminishing the importance of land. Landowners then

…lose their character as a disinterested and governing general class; their sense of autonomy and their power of criticism diminish; and the idea of power takes in their minds the place of the idea of freedom.

Added to this diminution of importance, agriculture itself, in becoming “industrialized,” demotes land to the status of personal property, something to be bought and sold, an investment less profitable than other forms because the returns are so much slower. With the coming of general industrialization and the industrialization of agriculture, the reciprocal bond between man and the land is broken. Land belongs to this man or that man, until such time as it may be relinquished for cash, but the man no longer belongs to the land. In becoming mere personal property. Reduced to mere personal property,

…land has become entirely detached from the personality of the landlord, with which it was once indissolubly united; it has consequently lost that peculiar force which it owed to a life spent in constant and unremitting contact with the soil.

Land—nature, natural resources, the earth--can make no legal or political claims on its own behalf. When the welfare of land is divorced from the interests of the landowner and the laborers in the field, land is no longer wealth to be protected but merely a means to wealth. And as other avenues are faster and surer, it is no wonder that little prestige attaches to farming.

The democratization of landed property, which de Ruggiero says began with the French Revolution, has also meant smaller pieces of property coming to be held by many more individuals, diffusing the any kind of unified political base among landowners. Without denying that there are good results, also, when the number of small landholders increases, de Ruggiero presents the downside of the shift:

If properties are too small, their owners’ minds turn to other preoccupations, professions, or employments, and the cultivation of the land becomes a subsidiary occupation. In this way they lose interest in all essentially agricultural problems, and bring with them into public life an outlook formed by the experiences and demands of their chief occupation. An excessive economic subdivision of the land pulverizes it politically; it becomes less and less able to resist the aggressive forces of industry and finance, acting through great concentrated masses, and usurping, even in mainly agricultural countries, a disproportionate share of public power.

Note that here again a false dilemma has been sidestepped. It is not a matter of small versus large landholders. The small farmer has not enough land to meet his needs, and legions of small farmers who make their living “off the farm” (to use the modern phrase) develop off-farm values or, at least, find themselves too weak individually to shape public policy, while “agribusiness,” with its enormous holdings, treats land like a factory, a capital investment to be maximized, large size purchased at such a price leaving no room for values other than those of the marketplace. The issue cannot, therefore, be large vs. small. Neither is abolishing private ownership a solution, as de Ruggiero makes clear. Such a move, it seems, would constitute a regression to slavery if human beings were tied to the land, and if they were not tied, no bond would be re-established in the absence of individual ownership.

Since writing that much, I have gone back to the beginning and am now engrossed by the section devoted to the history of the development of natural rights, so I won’t get into the problems de Ruggiero sees for Liberalism in industrialization and will resist the temptation to start quoting long passages from the beginning of the book.

In writing The History of European Liberalism, an admirably clear overview and synthesis, Guido de Ruggiero did not pretend to offer prescriptions for resolving the crisis of Liberalism, but 90 years after the publication of his book, we know what has happened in the interim, and his historical analysis can help to see the crisis of our own time in historical and context.
Posted by P. J. Grath at 10:28 AM

Interesting thought - what if we could atomize industry and finance into small holdings? Would that diffuse their power? Sustainable commerce. Hmm.

As in, return to small town banks? Banks that held loans rather than selling them off? I could get behind an idea like that, Gerry.