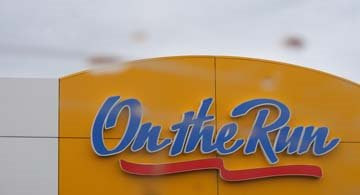 Faces of rock cuts speed past us, prehistoric time slipping by like a galaxy as we are borne, inexorably, out of Tennessee, through Kentucky, on into Indiana. Sometimes the cuts are terraced, and then, along each thin ledge, small redbud trees have found footholds sufficient for life. In bloom against the rock, on a grey day, they are breathtaking.

I am part of all that I have met;
Yet all experience is an arch wherethrough
Gleams that untravelled world whose margin fades
Forever and forever when I move…

These lines are quoted near the end of John Tillaby’s A Walk Through Europe (1972), which David started reading in Aripeka and which I finished with him in the car today, reading aloud while he piloted us across the Indiana prairie. I searched online this evening and found the full text of Tennyson’s poem, “Ulysses,” from which these lines are taken. Here is some more of it:

I cannot rest from travel: I will drink
Life to the lees: all times I have enjoyed
Greatly, have suffered greatly, both with those
That loved me, and alone; on shore, and when
Through scudding drifts the rainy Hyades
Vexed the dim sea: I am become a name;
For always roaming with a hungry heart
Much have I seen and known….

David was so close to the end of the book that I only came in for the end of the story, beginning with the account of a memorable meal made for the author by an old granny in the French town of Bonneval. That had me yearning, on a day of expressway driving, for France, for surprise, for adventure, but even Hillaby’s foot-trekking involved what he called “restless, zestless stages.” That, for me, summarizes most days I’ve ever spent on expressway (though I-65 is not the outright torture that characterizes time spent captive on I-75), but sometimes, I must acknowledge, covering territory is the main objective. Never mind that glimpses of winding roads tug at the heartstrings! Banish that lump in the throat as the Ohio River is crossed and the South left behind! We have explored rural Kentucky on other occasions: this time we need to get ourselves back to Michigan. But I love a lot of Indiana, too! Does that make sense? If only we had time to follow every inviting vista beckoning to us! I would be Ulysses and never rest from travel—or…?

I think the answer lies in the fact that my tendency is to enter into whatever country surrounds me, to the extent possible. What is frustrating about expressway is the feeling that one is not in the country but being conveyed through it while being isolated from it. 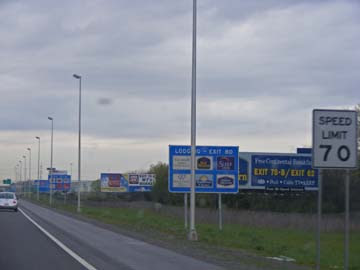 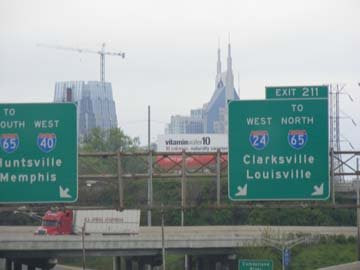 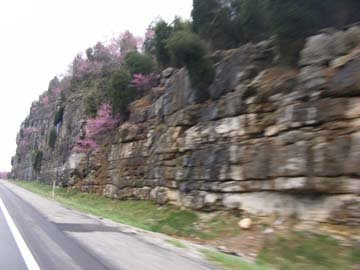 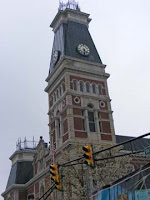 Enough complaining! After the two near-perfect days we had coming north through Florida and Georgia! Today, too, spent crossing the ocean of prairie dotted with farmstead islands, offered up its own time-island of magic when we stopped in Columbus, Indiana, home of the Four Freshmen but even more famous as a city of outstanding architecture, acknowledged for architectural design by the American Institute of Architects. I’ve made several visits to Columbus, after discovering it, by chance, when traveling between Cincinnati and Champaign-Urbana, but it’s been several years, and there have been a lot of changes. 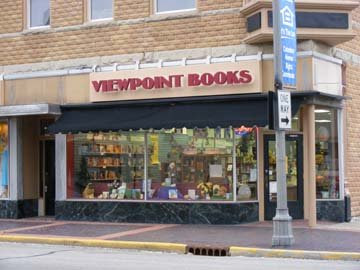 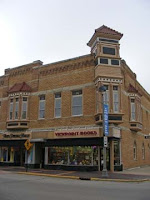 The mall is being rebuilt, for one thing, and Terry and Susan Whittaker’s Viewpoint Books has moved from the mall to a corner location on Washington Street. The rain held off long enough for us to stroll beneath the flowering pear trees (petals drifting down on us like snow or confetti) to the bookstore, where I bought a book on the architecture of Columbus and we visited with Terry and bookstore employee Melinda. We bookstore people trade combat stories, tales of moving shop and stock. As friends and customers did for Dog Ears Books in Northport, Columbus volunteers turned to schlepp for Viewpoint Books. "Book people are great!" we all agreed.

Next stop was the deli down the street, where I ordered the sandwich called “Double Dilemma,” because—how could I not order a sandwich called “Double Dilemma”??? We were unable to see the Jean Tinguely metamechanical sculpture “Chaos No. 1,” which is currently under wraps, awaiting needed renovation, but did see the new video at the Visitors Center, as well as the Chihuly chandelier in the new addition to that building. Thanks, Judie and Joyce, for your warm welcome and all the information you provided! (Joyce and her husband operate the Ruddick-Nugent House B&B, which occupies an entire historic block. Who wouldn't want to stay there?)

Tonight we learn, to our dismay, that Murfreesboro, Tennessee, where we stayed last night, was struck by a tornado only hours after we left. Of course we are happy to have missed it, but our sympathy goes out to the folks in Murfreesboro, memories of Kalamazoo’s 1980 tornado still very much alive for us.

In closing this evening—our last evening before we re-enter Michigan—and in salute to Murfreesboro, Tennessee, here are the last words of Tennyson’s poem:

Tho' much is taken, much abides; and though
We are not now that strength which in old days
Moved earth and heaven; that which we are, we are;
One equal temper of heroic hearts,
Made weak by time and fate, but strong in will
To strive, to seek, to find, and not to yield.

We are tonight in South Bend, Indiana. Tomorrow, Kalamazoo....