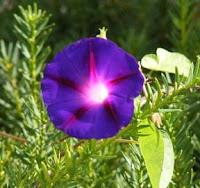 Our grandchildren arrive today! The drought is over, the storms have passed, the humidity is gone—everything is perfect for their Leelanau week.

Thinking about their coming, I took time this morning to walk around town with Sarah, trying to see Northport with new eyes. For the first time, I visited the Visitor Center, down by the harbor, and talked to the greeter there, a woman I’d never met before. The building is airy and attractive, with lots of maps and informational brochures. I invited Shelley to visit the bookstore and gallery sometime, offering her a personal tour of my Waukazoo Street domain. It’s always surprising to meet someone in Northport (especially, in this case, someone who lives in our same general country neighborhood) who is still a stranger to me. 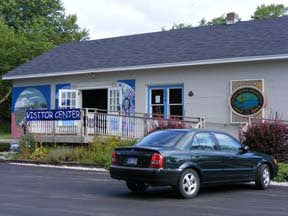 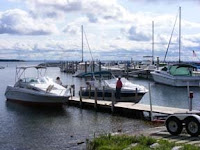 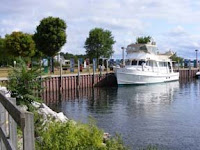 In the marina, one party of vacationers was using the boat ramp to launch a motorboat, while someone else was tidying up a handsome motor yacht, moored against the north breakwall, doing some of the perennial little jobs always needing to be done on a boat. The sailboats in their slips sparkled, the smaller ones bobbing in the breeze. 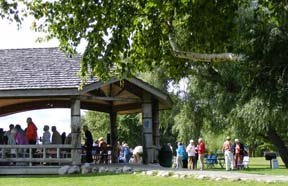 Over on the other side of the marina, I thought at first that there was a hymn sing going on, but my second thought (I’ll check this later with Susan Cordes when she stops in) was that it might be the church pig roast scheduled for today. 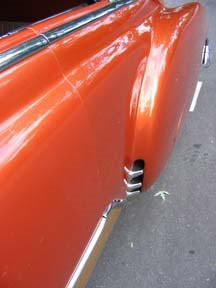 Back across Mill Street from Barb’s Bakery was Keith Ashley’s beautiful three-tone vintage automobile. This is one of its three colors.


Off and on during the day yesterday, between customer purchases and while browsers were busy browsing, I read through, in pieces, EX LIBRIS: CONFESSIONS OF A COMMON READER, by Anne Fadiman. Often hilarious, sometimes poignant, always seeming to be pointing right at me, this book had me yelping with happy laughter. Young Anne’s introduction to literature was using her father’s hardcover books as building blocks. The Fadiman family, Anne notes--father, mother, sister and brother--were a pack of compulsive proof-readers. Finally combining their respective libraries was a significant milestone in her marriage to George, and the best birthday surprise he ever gave her was a trip to a used bookstore in the Hudson River Valley. Every page struck me as so quotable that my desire swelled until I wanted to quote THE WHOLE BOOK—which of course would rather lose the point of quoting, as one of my philosophy professors in Cincinnati pointed out to another, the second of whom had underlined about eighty percent of his text of Descartes’ SEARCH FOR A METHOD. But I digress.

“Then I saw it: a weather-beaten little shop, perched on such a declivitous slope that it looked in danger of sliding into the Hudson River, with a faded blue sign over the door that said BOOKSTORE. Inside were an unkempt desk, a maze of out-of-plumb shelves, a flurry of dust motes, and 300,000 used books.

Anne and George clearly excel in the art of browsing. Not for them the hands in pockets, wary suspicion and comments along the lines of, “All we need is more books!” It is for the Annes and Georges that I have good, strong boxes on hand. Each George, each Anne, may only visit once a year, but they and I, “literary gluttons,” as Fadiman calls us, recognize and understand and even love each other. --Oh, I cannot stop! I must quote at least one more passage!

“And when the eighteenth-century London bookseller James Lackington was a young man, his wife sent him out on Christmas Eve with half a crown—all they had—to buy Christmas dinner. He passed an old bookshop and returned with Young’s NIGHT THOUGHTS in his pocket and no turkey under his arm. ‘I think I have acted wisely,’ he told his famished wife, ‘for had I bought a dinner we should have eaten it tomorrow, and the pleasure would have been soon over, but should we live fifty years longer, we shall have the NIGHT THOUGHTS to feast upon.’”

A sensible man? Or already fated to be a dreamy bookseller?

The literary glutton in me is tempted to hoard EX LIBRIS for the rest of my life, while the hard-headed bookseller in me hisses, “Sell it!” The grateful person I remind myself to be more often, however, knows that this particular book must be a gift to Bruce, the bookstore angel, who loves not only books but the genre “books on books” better than anyone I know.

IN THE NEWS: Our friend Susan Ager's last column appears in today's DETROIT FREE PRESS. Susan took the proffered buy-out but is calling her transition an "indefinite sabbatical" rather than retirement. She says she wants to be a "better friend and a better person," and, while unsure exactly what the future holds for her (there's reality for all of us!), she is keeping busy at present answering notes and e-mails from well-wishers. We'll miss her in the paper. We'll hope to see more of her around Northport. Job well done, Susan!
Posted by P. J. Grath at 9:37 AM

Thanks for your kind words about my sabbatical, Pamela. I also want to say that Shelley Lavey, whom you met at the Visitor's Center, is an old friend and long-time colleague at the Detroit Free Press, where she ran the library. She and her husabnd Tom Gallery have had a summer place up here for awhile, but moved up permanently when they both retired a couple years ago. I'm so impressed with what the two of them have done at the Visitor's Center, rehabbint it physically, then creating many brochures, doing the research and writing and printing. They say they've handed out about 10,000 pieces in the past couple months! Kudos to the new kids in town.

There was a wedding "on the beach in Northport under a tent" at 5 pm Saturday. My table of blackjack players were worried about the weather and the wedding, so I checked the weather channel when I was on break.

I assured them that the storms would be through in time for the wedding. I'm glad I was right.

The Visitor Center is a much-needed addition to town, and Shelley and Tom have done a fabulous job. Saturday evening did turn out beautiful for the wedding.

Today, Monday, has been another great day. Sarah and I began it with a long overland ramble. Back at the house, I made cinnamon rolls for our visiting family, and then we all went to Leland, where Grandpa and the boys tried fishing in the river. No success. Can't say we hadn't assembled a good batch of worms, though, dug out of my compost pile.

Sarah and I are having a little quiet time at home now (I'm cooking) while David works in his gallery and the visitors take a long bike ride. In a few hours we'll be back together here at the farm, picnicking under the trees.

So, Neige, six years' study of English and five of French? The level of your French tells me your English must be pretty good, too. I'm glad we found each other's blogs. I really do enjoy these windows on other worlds.

The Chevy car pictures was beautiful. The spelling of his last name is Ashley. Very interesting blog.
Another anonymous

Thanks for the correction. In appreciation, I'll post another shot of Keith's car for you, whoever you are!

You have made me think of that quote by Erasmus (which I am sure you are familiar with): “If I have a little money I buy books; and if any is left, I buy food and clothes.” Unfortunately, when I am hungry I get headaches and cannot read books, so I don't live by this standard, but I think it is a wonderfully idealistic one.

Hi, Jeane, and welcome! Yes, I know the quote, and I even have a tee-shirt with that printed on it, souvenir of a library book sale in Houghton, Michigan, that we stumbled on one September on vacation in the U.P. Along with the shirt, I bought a couple boxes of books, naturally.