When I came across this quotation in a volume on book collecting, “The night of time far surpasses the day…,” my first literal association was with the psychological slowing of time during what someone else has called “dark nights of the soul.” Yes, those nights are long, and the coming of daylight a blessed relief. The quoted sentence, however, doesn’t stop there, and I had to search out the larger context to discover the meaning and how it might relate to the matter of rarity in old books. Here are two consecutive sentences that begin to shed light:

The number of the dead long exceeds all that shall live. The night of time far surpasses the day, and who knows when was the equinox?

There, we see, the “night of time” holds all the dead, remembered and nameless, that have gone before us, and the ancient and forgotten “equinox” would have been early in human prehistory, when the dead and the living were equal in number – if we can even imagine such a moment as real, given evolution and all. Where might a meditation on this idea take us? Seventeenth-century English writer Sir Thomas Browne began his own meditation inspired by the discovery of ancient Roman burial urns in the Norfolk countryside, and the quoted passage above appears in his Chapter V.

Perhaps the most educated man of his time, Browne was not content to say merely that life is short and that almost everyone who lives is forgotten in time … or at most remembered as a name only or for some particular aspect or some act perhaps not essential to the living being who once walked the earth … and his “Hydriotaphia” is certainly worth reading and re-reading – which I shall do! -- but this morning I’ll return first to John Carter’s Taste & Technique in Book Collecting, because many other books await me, as well as letters deserving replies.

Anyone who has read previous posts on this blog, the farewell to Peasy followed by the Artist’s medical crisis and its resolution, knows that seasonal retirement has not been exactly a picnic this time around but that we have been abundantly blessed with family and friends and good fortune. Postponing our return to Dos Cabezas until Sunday morning, we were enjoying such a relaxed Saturday at the Artist’s cousin’s Phoenix home, in fact, that I decided to steal away by myself for an hour to Books on 7th Avenue. 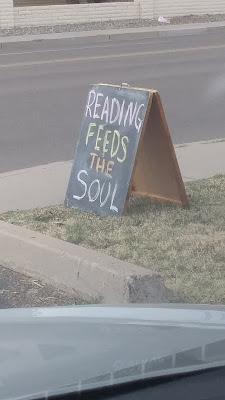 Whenever I first find my way to a treasure island of used books, it takes a while for my initial excitement to subside into the calmer mood necessary for discovery. Excitement in this case was heightened before I even made my way through the door, as there on the FREE cart outside I found a book for my Western collection, a public library discard copy of The Civil War in the American West, by Alvin M. Josephy, Jr. Once indoors, I quickly came upon A Clash of Cultures: Fort Bowie and the Chiricahua Apaches, a tragic story set in Cochise County, and The Cattlemen, by Mari Sandoz, the latter without a dust jacket but definitely important enough in my eyes to purchase. 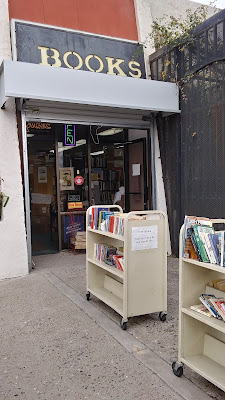 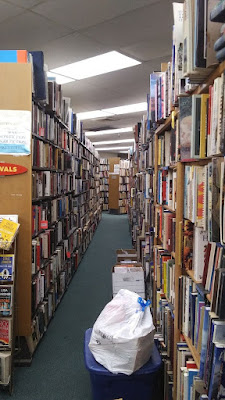 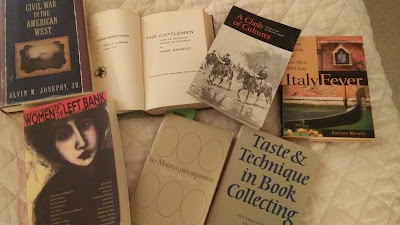 Happy with three additions to my growing home library on the West and Southwest, I explored other aisles and found other treasures, including a book for the Artist, one for our host, one for a friend back in Michigan, and two on French literary history for myself. Reluctantly but happily, I stopped with those eight and felt amply rewarded.

What was it that the Chinese fortune cookie foretold for me back in 1986? “Your path will be arduous but amply rewarded.” I carried the little slip of paper with me for years and carry it still in memory.

We Get Letters – and Books!

We returned to the ghost town on Sunday, January 16. The Artist had not seen the cabin since January 5, and I had left it on the morning of the 8th. Expecting mail and not knowing how long we would be absent, I imposed on a neighbor to collect mail from our box down the road, and on Monday morning she brought the week’s haul. (Another neighbor brought food enough to take care of us for days!)

Almost all the letters included condolences for loss of Peasy but had been written before anyone had heard of our subsequent trials. Still, how good to get news from faraway friends and to be assured of their love and good wishes for us.

A friend in Kalamazoo sent me books, a large one on horses (!) and two paperback volumes of Rousseau’s Confessions. I have already dipped into Volume I of Rousseau, but the Artist and I are both more than eager to read the novel (copy inscribed to the Artist) by a writer we met years ago, when I copyedited his first book, a volume of short stories called The Wild Upriver. Jim McVey’s new book, Loon Rangers, like the first, is graced by a David Grath image on its cover, and I am confident that the story will transport us to the wild outdoors that Jim knows so well. Anticipation is yet another delight in the life of readers. 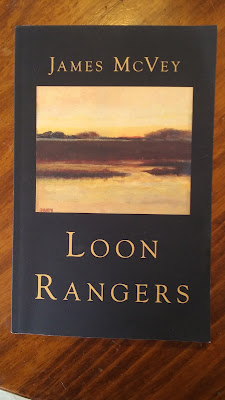 One friend wrote that it seemed we had “found peace” with our decision to bid farewell to Peasy. Another hoped we were not “harboring guilt.” Most all understood the difficulty of the decision. At least one sent hugs.

When I first posted about little Pea’s leave-taking and wrote about how much we had given him and the gift I felt he was in our lives, I meant every word, but I must say that I have yet to “find peace” with the decision or the good-by. It was, I know, the most “responsible” decision. And yet – our little dog boy was so full of life and joy, and the house and car and the vast range around the cabin are resoundingly empty without his presence. Despite all the anxiety he caused us, he was also a comfort in many ways. The other day I said to David that if by some miracle (and it would be, too!) we could have our practically perfect Sarah back with us, my heart would still ache for Peasy. Bless him -- he understood.

We two could not be more blessed with family and friends and, as I said above, good fortune. We have each other – certainly not anything to take for granted after the past week and a half! Out of medical limbo, we are once again looking forward, and that feels good.

But also, not to trivialize human life, there is that ever-present absence these days. The Artist and I have been fortunate in having had the opportunity to love and be loved by three dogs in the past three decades [I had to correct the time period there!], each with a different personality and all with permanent places in our hearts, so I’m sure the heartache I feel now for Peasy will subside in time to something gentler and happier. Just now, though, in the light of life’s brief candle, I am grateful for the understanding of anyone who has ever known and loved a difficult dog, because even a “dog with issues” is so much more than his issues and the difficulties he presents.