Off to Join the Circus 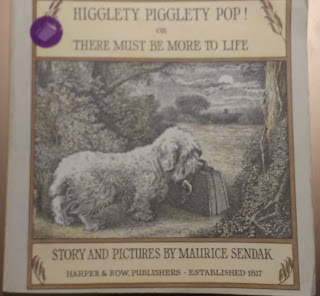 Once Jennie had everything. She slept on a round pillow upstairs and a square pillow downstairs. She had her own comb and brush, two different bottles of pills, eyedrops, eardrops, a thermometer, and for cold weather a red wool sweater. There were two windows for her to look out of and two bowls to eat from. She even had a master who loved her.

-      Maurice Sendak, Higglety Pigglety Pop! Or, There Must Be More to Life

So begins a modest little picture storybook for children by beloved Maurice Sendak, first published by Harper & Row in 1967.

My son and I discovered many wonderful children’s books together when he was young, and of course I also introduced him to those I had loved in my own childhood, but somehow we missed Maurice Sendak. It was not until the 21st century that I became familiar his work, and even then the book that everyone talked about was In the Night Kitchen. I never heard or read anything about Higglety Pigglety Pop! until I ran across it later, quite by chance. 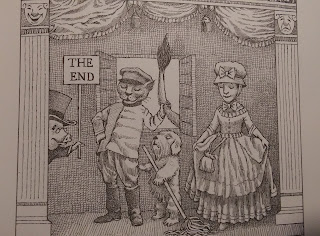 The illustrations (by the author himself) are irresistible. But it always bothered me that the little dog who had “everything,” including “a master who loved her,” was so discontented that she packed up “everything” and left home. And she doesn’t go home in the end, either. I was sad for the master left behind. Long after my initial impression, I learned the story behind the story when an interview Terri Gross had done with the late author years earlier aired again on the anniversary of his death.

When Sendak’s beloved dog Jennie died, he rewrote her ending for a children’s book, having Jennie run off to join a theater company and become a star. Higglety Pigglety Pop! is dedicated “For Jennie,” and the story ends with a note Jennie sends to her old master that begins, “As you probably noticed, I went away forever,” and ends, “But if you ever come this way, look for me.”

Some dogs go to live on farms, some run off to join the circus or a traveling theatre, and many simply go over the rainbow. One thing they never do is die. They live on forever in our hearts.

8. Sendak, Maurice. Higglety Pigglety Pop! Or, There Must Be More to Life (fiction – juv.)‘

10. Bragg, Rick. All Over but the Shoutin’ (nonfiction)

Oh, I must look up Mr. Sendak’s books…Julia and I read lots, but not him. We read in English and Portuguese so we could both be reminded of both languages even though we jumped back and forth quite a bit in her growing up. Jennie was a beloved dog, and I can see very clearly why he wanted her to live on, but you are so right when you say that they live on in a person’s heart. The rainbow photo is just a perfect ending.

Thanks, Jeanie. I am reading a book in French right now (off and on, alternating with Edwin Way Teale and other books) but envy you your easy ability to switch back and forth between English and Portuguese. Living in two countries! Wow! Love you --

Hello Pamela! I SO envy your facility in French! I stopped classes (mostly writing and speaking..just 4 women & a great teacher) when we moved out of Mass. French here in São Paulo was a very popular language and older people have an easy way with French because of sounds and vocabulary that are similar to Portuguese. English has taken over, most sadly.
By the way, I sent you a message through iMessage which is an app related to Facebook. It notifies you with a number. Your photo came up and it looks like you’re part of that, so I used it. BUT, there are many ways to communicate, and it can get confusing: where IS that message from X person? Please just let me know what’s a convenient way for you….you do so much writing-and reading- that I’d like our chit-chats to be easy to access. Ta Ta for now!

I don't use the Fb message thing on my phone. Don't want to download any more apps than I can help. And I prefer e-mail to Fb for personal news, whenever possible.

Earlier today I was listening to a radio call-in show in Spanish and was pleased to be able to get the main gist of the dialogue between caller and host (host did most of the talking, actually), because often Mexican or American Spanish-language radio speakers go so rapidly that I can only get a word or phrase here and there.

We are at a library at the moment. I am not able to get online at the cabin any more, as my phone stopped making a hotspot, and even the "engineers" at Verizon have not come up with a cure, but I go out most days and find wifi somewhere.

OH! Isn’t a hoot to be able to “kind of” follow a conversation in another language? Good for you….maybe the host is a professional who has good diction, and who wants you to understand. I must say, the Spanish I am fluent in is from Colombia and sometimes I have a hard time with the Mexican pronunciation. It’s me, also, because I don’t listen to or watch Spanish language programs. Good that you can find wifi in various places. Brooklyn has tons of small cafes and delis that offer free wifi and many people take advantage of it. “See” you here or in an email!

On the Spanish -- ha-ha! The speech of call-in hosts is easier to follow than rapid-fire DJ talk! Now if only those French Canadian tourists would show up in Willcox again....