An Important Book Surprise from Korea 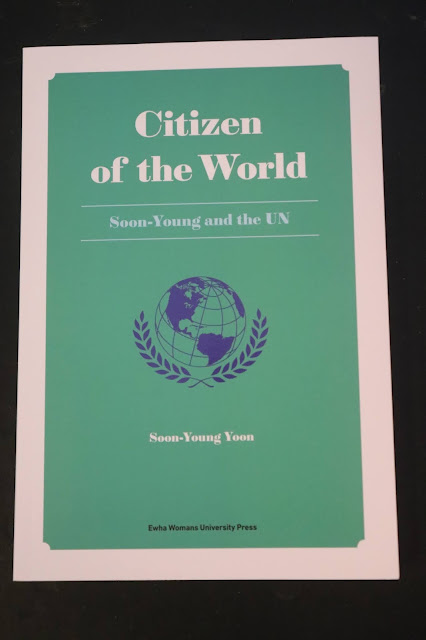 If women have one lesson to teach about social change, it is this: where there has been a culture of oppression, there have always been custodians of hope. You only have to find them and let them speak.

Soon-Young Yoon grew up summers here in Northport, Michigan, so we can claim her as a local author. She is truly, however, what she calls herself in the title: a citizen of the world.

Yoon came to the U.S. as a child refugee from North Korea and has worked with the United Nations and with NGOs, as well as universities. (Her Ph.D. is in anthropology.) But despite her cosmopolitan career -- or maybe because of it -- American-ness shines forth in her can-do attitude toward the world’s most pressing social and environmental problems.

Each small section of this book (I would think of these as chapters, but the table of contents calls the larger sections chapters) is a short, self-contained essay, typically three to five pages, usually with a photograph, each focusing (beyond the introductory autobiographical pieces) on a serious global issue. Despite many acronyms and dates, the author’s style remains simple, conversational, and highly readable, always engaging the reader on a personal level. Beginning with her own United Nations experiences, she cites initiatives taken by other individuals and groups around the world to deal with the specific problem that is the chapter’s focus. There are problems here but no helplessness or hopelessness.

Yoon is a strong advocate for women around the world, especially in too-often overlooked poor and/or indigenous populations, and she is a staunch believer in motivation and action to make positive change. For example, she tells an inspiring story from Burkino Faso, where one woman’s determination to move forward from complaints to positive action made all the difference in a local meeting. Dying cattle, deforestation, and the exodus of youth from the region all stemmed, this woman believed, from the disappearance of the area water supply, so she organized other women into groups to build traditional earth dams, to plant trees and gardens around them, and to feed the cattle. Men eventually became involved, also, and life changed for the better for everyone.

Since indigenous women are always involved with agriculture at the ground level, Yoon says it is imperative that their voices be heard and their knowledge brought to the table whenever solutions are sought to environmental problems.

While deeply concerned with improving the lives of women and girls, from working for gender equality to ending all kinds of violence against women, Yoon realizes and emphasizes that boys and men cannot be left behind. Even public clinics open to all, she writes, benefit girls whose mothers bring them in to be seen by doctors, but too often boys do not want to come with mothers. Their fathers do not bring them. “We cannot assume that backward traditions affect only girls,” she writes. “Sometimes, boys are also the losers.”

And although the book is divided into sections – “About Me”; “Navigating the Boundaries of Identities”; “Violence Against Women”; “Finding the Earth’s Balance”; “Claiming the Right to Health”; “Economic Empowerment”; “Collective Voices”; “Circle of Women: Portraits” – again and again the author reiterates her truth about connections linking all social and environmental issues. Her image is that of a spiderweb, a web of life that includes everything on earth, animal, vegetable, and mineral, and she insists that those who want to help others need to listen to what those others say about what they need, because the people of a culture are the ones who know that culture. Those in technologically “advanced” countries, she speculates, may even have much to learn from peoples with simpler ways of living, those from cultures that have not created the problems of pollution and waste we face in, for instance, the United States.

Citizen of the World: Soon-Young and the UN is published, in English, by the Ewha Womans University Press in Seoul, Korea. (Yoon tells us that Ewha Womans University is the largest women’s university in the world, with 25,000 students. Did you know that? I did not.) In this highly readable volume, focused on important world issues, with serious problems never oversimplified or minimized, the author manages to give inspiring and encouraging anecdotes and observations.

My hope is that this book will become easily available in the United States (at present it is not) and read by as many Americans as possible, men as well as women. For this to happen, there needs to be a groundswell of demand, from book clubs and libraries, as well as colleges and universities, and this post is my little push in that direction. This is crucial because, as the author notes in an online interview, the changes that are necessary in today’s world must necessarily happen fast.

I am so proud to be the first bookseller in the world to offer this book to the public! Thank you, Dr. Yoon! 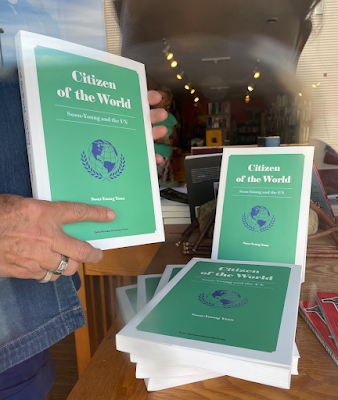 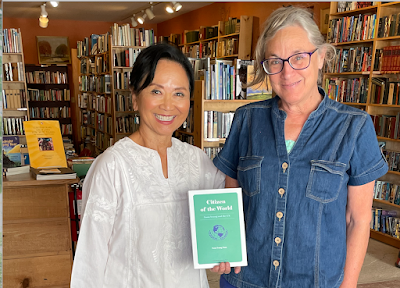 Warm congratulations ! Would love to have a copy since been involved in the CSW in both NY and Geneva. ajbeutler@gmail.com

Thanks so much for your recommendation - ‘’Citizen of the World’’ author, Soon-Young Yoon and your picture with her, is inspiring! Amazing also is the her connection to Northport. Congrats on your sale of her book!

Thank you, Jeanie! It IS exciting!

I would love to have a copy of this book.I can donate it to Atria afgter reading.