Falling Behind and, In Doing So, Making an Accidental Discovery

With so few demands on my time, I am still falling behind, because -- well, so few demands, yes, but those so very demanding! You know the name of one of them without my mentioning it!

What I’m falling behind on, besides my Silas project, is writing on this blog about books I’m reading. It’s all been dogs, dogs, dogs and mountains, desert, snow on the blog for quite a while now. Not that I’ve heard any complaints, of course. After all, so many of you are stuck indoors with your own reading and movies and baking and knitting and whatnot that I realize the allure of vicarious outdoor adventures.

Be assured, however, that today’s indoor bookish adventure will not be a long, dry discourse on economics or history. In fact, the book I want to write about is one I picked up to “take a break” from more serious reading, a book that aided me in falling behind with book reviews I have in mind to write and post. A beat-up paperback (I taped it back together) from the outdoor 10-cent table at the Friendly Bookstore in Willcox. A murder mystery. By an author whose name faintly rang a bell in memory but whose work I did not recall ever reading before. 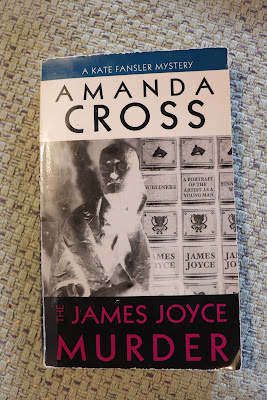 and how could I resist the title, after our little reading circle back in Michigan initially came together years ago precisely in order to read together Ulysses, by James Joyce? The tempting volume, small in size, light in import, also seemed a perfect car book. Do you have those? The Artist and I always have one or two books apiece in the car, so one of us can read while the other is running an errand or so we’ll both have something to read on the porch at Source of Coffee -- although we generally end up in conversation on that porch instead, at least with each other when not also with a friend or two.

But I digress (digression being the prerogative of a blogger without an editor).

In The James Joyce Murder, by Amanda Cross, protagonist Kate Fansler, professor of Victorian literature, is ensconsed in a country house in western Massachusetts, working (at the request of the heir, a cloistered nun) to determine the contents and bring order to a collection of literary letters and papers left behind by a late friend of her family. She also has the care of a young nephew for the summer. Two graduate students complete the household, one working on the collection, the other tutor and companion to the boy, and rural neighbors and academic friends fill out the cast of characters, with cameo appearances by various policemen, a car mechanic, and a publisher in New York.

Confession: I did not find the story completely engrossing. The language put me off, for one thing. “The conversation is like something in an English drawing room comedy,” I complained to the Artist. A paragraph from the protagonist’s mouth in the first chapter will serve.

“Familial connections are always difficult to explain, and impossible to sever. Not that one really wants to, I suppose. However trying one’s family, there is some call of blood to blood which one is somehow impelled to answer. I have nothing in common with any member of my family, and yet in crisis, personal or national, one always rallies round.”

In the paragraph above, Kate is talking to a close friend, but doesn’t it sound as if she’s speaking lines in a stage play? And everyone talks that way in the novel, page after page. Too witty for belief! My credulity was strained. But the reading required no great effort, dialogue makes a story go faster, and the whole book wasn’t that long, so I kept at it, a few pages at a time.

It took a long time before anyone turned up dead. When the corpse was discovered, it was hardly a surprise, as it was someone whose death no one seemed to mourn. Certainly her husband did not, nor any of her neighbors. (The children did not appear and so were not asked in the pages of the book.) From the first introduction of the poor, doomed character, obviously marked for an early grave, I felt the author and everyone else judged her far too harshly. She was annoying, but is that a sin, and shouldn’t people with serious, rewarding careers and the good fortune to pass their summer in idyllic surroundings have better things to obsess about than a neighbor they don’t find congenial? Still I persevered and discovered, at last, who done it.

A far more interesting story came to light when I read a brief biographical sketch of the author at the end of the book and found that Amanda Cross (some of you undoubtedly know this already) was a pseudonym for Carolyn G. Heilbrun, author of fourteen nonfiction books under her own name, the first woman to earn tenure in the English Department at Columbia (her specialty was British modern literature), Avalon Foundation Professor in the Humanities at Columbia University, MLA president in 1984, and outspoken feminist. When she “discovered” feminism in 1968, she felt she had been “born a feminist.” Married to economist James Heilbrun after they met in college, she was the mother of three children when she went on to graduate school herself. A “nontraditional” student: I could relate to that. Her strong views on feminism were matched by strong views on other subjects, as well, particularly her desire not to live beyond her usefulness, and she planned initially to commit suicide at age 70 but lived until age 77, when she took her own life without any preceding fanfare or crisis.

Heilbrun frequently skewered academics under her pen name, but The James Joyce Murder was published almost two decades before the biggest controversy in her own life, a tempest that arose when she accused (in an interview) her own English Department at Columbia of discrimination against women. To my ear, the charge hardly seems controversial by now. How, I wonder, could anyone doubt discrimination in 20th century academia? Was there any college or university department in the country that had not discriminated against women, as well as against candidates and department members of color?

Kate Fansler may have been the pseudonymous author’s alter ego, but when reading of Heilbrun’s life I saw her retrospectively in a minor character, also, that of Grace Knole, retired professor of medieval literature, and my retrospective look back at a book I just finished reading is also a look ahead to the older age of an author who published the book when she was only 41 years old. Here, anyway, is Grace Knole speaking to Kate Fansler, urging her to accept the presidency of her college. Kate has suggested that Grace should be president instead.

“I agree with you, actually. …But people these days want their college presidents young. To be frank, I can’t imagine why. It seems to me that college presidents, like popes, out to be old when appointed: they can then afford to take risks, and they can’t live on too long and get set in their ways. That, however, is not the American way.”

For 26 years prior to her suicide, Carolyn Heilbrun had gone for a daily walk with her friend, art historian Mary Ann Caws. During their last walk and conversation, amidst talk ranging from Darwin and Manet to women’s poetry and the state of the world, Heilbrun commented that she “felt sad.” “About what?” her friend asked. “The universe.” Apparently Caws did not attach particular significance to that brief exchange and confidently anticipated their regular walk the following day.

Carolyn Heilbrun had a good life – happy marriage (her husband “read every word she wrote”) and children combined with independence, friends, and a successful career – but it sounds as if she had grown tired.

Soon I want to read one of Heilbrun’s nonfiction books, The Last Gift of Time: Life Beyond Sixty. The title sounds so familiar that I wonder if I may have read it already, but it would have an added dimension now that I know more about the author’s life – and as I move on beyond 70 myself, kept lively by a most lively-minded human partner and, for now, a more-than-lively young border collie.

A very interesting post. I look forward to your thoughts in the book. And Peasy? That look says "Just going my job,mom, making you smile."

Hi Pamela! Nice to be reading you again! Frederick Douglass (D.W. Blight) has kept me busy and reading about politics, here in Brazil and in the States. You know, Black Lives Matters has so many parallels to Mr. Douglass’s middle and later years where he was a fiery speaker about what Blacks should be able to have being citizens of the USA. About your Amanda Cross: when I read the first excerpt, I thought she sounded very Brrritish! Her specialty, indeed! I like a good murder mystery so I might give her a try (if Kindle allows me), or if you have other authors to suggest, I’ll follow your lead! What an adventure, the Kansas Settlement Rd. story! The land doesn’t look too inviting for crops, so cattle seemed the right move for them. Peasy is SO cute! I hope he is getting easier as he grows up! Your photos are captivating!

Hi, Bean -- good top hear from you again, too! I will soon begin reading the Chestnut autobiography, BLACK IN SELMA, but am presently immersed in THE GREAT HUNGER, a book about the Irish famine that I came to in a roundabout way which I'll explain sometime in the future.

As for murder mysteries, I enjoy J. A. Jance, whose fictional female sheriff is at work right here in Cochise County, Arizona! Also Sara Paretsky, whose Polish P.I. works out of Chicago. Then, of course, there is northern Michigan's own Aaron Stander and two U.P. series, one by Joseph Heywood, another by Steve Hamilton.

Dawn and Jeanie, Peasy is getting easier in many ways, but he is still severely challenged when it comes to socialization. Not enough opportunities -- at least, I hope that's the only problem. In other ways, he is better every day.