Behind Us at Last!

That fateful, “unprecedented” year, 2020, the year in which you heard the word “unprecedented” more frequently than ever before in your life – heard it with unprecedented frequency! -- is finally in our rearview mirrors!

As communities, we struggled not only social, racial, and political strife -- the stuff of nightmares, so much of it -- but also COVID-19 and the many hardships and losses brought on by the virus. Anxiety, stress, exhaustion. Today, on January first, 2021, not out of the woods yet, by any means, we have at least the sense of hope that comes with every new year, a feeling that, somehow, we can “start over” with renewed strength.

We’re going to need renewed strength, aren’t we? We all know that, right?

As for this quiet blog, the discursive and eclectic meanderings of a “tiny bookseller,” I have to admit that what with everything going on, my reading suffered in the year just past: I read 28 fewer books in 2020 than in 2019 (most of the slow-down occurring in late November and early December along with the loss of our beloved dog, Sarah). Reading fewer books in a given year is hardly a tragedy, even on the subjective, personal scale of things. I only mention it, first, because this blog, after all, is called “Books in Northport” and, second, because it is a measure of my own mental and emotional state during those non-reading weeks. In a word, turmoil. I’m sure many others experienced turmoil in the course of the past year, although perhaps with different effects. Maybe you gained a lot of extra and unwanted weight. Or maybe, as did a good friend of mine, your anxiety resulted in weight loss. And/or maybe you had whole days when you couldn’t find the energy to get dressed – since you weren’t going anywhere, were you?

It was a challenging, difficult, heartbreaking year.

The divide between December 31st and January 1st is a strange one. The winter solstice would be a more natural cutoff from the old year. Inauguration Day, for Americans, would better capture a new political beginning. And yet, on a night between those two important dates, we “ring out the old year” and welcome the new. Celebrations were quiet this year, the ball falling in Times Square in what could hardly be called a "crowd" a striking symbol.

Are you a New Year’s Day traditionalist? Ever since the two winters I spent in Cincinnati, Ohio, hoppin’ john has been my tradition on the first day of the new year. Sometimes we have had New Year's Day with friends, in a party atmosphere marked by champagne toasts. This year we’ll have it quietly, perhaps with small glasses of sherry like those that preceded our New Year’s Eve dinner. (New Year's Eve dinner post is here.)

Our new dog, Peasy, already a creature of domestic routine, let me sleep in until 6:30 a.m. today! Here is our morning schedule, times variable but order always the same: Peasy goes outside on a leash for his morning pee; we come back inside, where he has his breakfast, and I have my first coffee; next he gets his first peanut butter kong of the day and after enjoying that must amuse himself quietly (as quietly as possible, that is) with chew toys while I read and write. Eventually there will be coffee for the Artist, radio news from NPR, and another on-leash sortie for Peasy to take care of important dog business, followed perhaps by “pack time” up on the bed, all three of us together – before I get dressed and take the little dog out for his first joyous run of the day.

Non-Peasy aspects of our ghost town winter morning routine include, for me, a daily phone conversation with my son and, except on Sundays and holidays, a stroll down to the mailbox on the highway, in hopes of cards or letters from friends.

I indulged in a lot of comfort reading this past year but made the decision on New Year’s Eve that I would begin the new year with a serious and yet positive book of nonfiction. I have been wanting to read President Carter: The White House Years, by Stuart E. Eizenstat, since the first reviews came out, and this morning the moment to begin arrived. My love and respect for Jimmy and Rosalynn Carter is no secret, and I have been a contributor to the Carter Center for many years. Author Eizenstat wraps up his introduction with these words from President Carter’s vice president, Walter Mondale:

“We told the truth, we obeyed the law,

we kept the peace.” 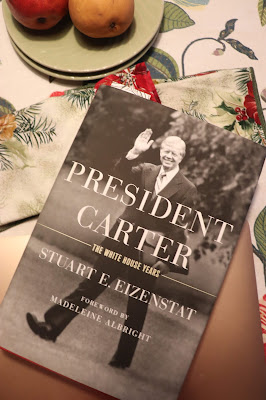 There was, of course, much more to the Carter presidency than can be captured in any single sentence, but I find deep significance and honor in those words of Walter Mondale and hope the incoming president and vice president of the United States will be able to say something similar  -- and say it honestly – when they leave office, whenever that may be.

So now, if you fell asleep before midnight or stayed up until dawn, find a moment today to “take a cup o’ kindness,” and may you be strong and healthy in the months ahead and blessed with love of family and friends! 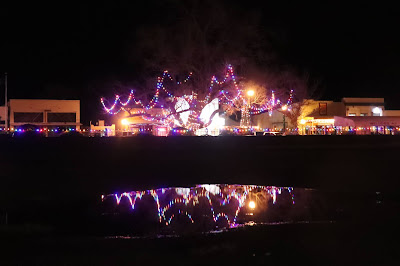 Happy New Year, Pamela, to you and your family. I read fewer books, too, starting in October I don't know that I finished one. A sign of how distracted and exhausted I am.

Happy new year to you, Dawn! Let's hope we will be at leisure to focus more on reading in the new year.