Every Day, Something New to Learn 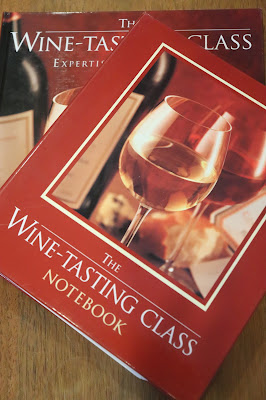 My son and I were talking on the phone one recent morning and saying how little alcohol either of us consumes, now that we are so – ahem! – let us say, mature. I tell him one beer does it for me. We went on to talk about wine, and I said red is supposed to be good for you, but he said he prefers white, since it doesn’t all the -- . We both paused, searching for the word he wanted.

“No, it’s – congeners,” he said, pleased to retrieve a word that his mother had never heard or seen before in her life.

In the context of wine, congeners are produced during fermentation, that is, “born with” the alcohol produced. In a more general definition, any pair of things belonging to a set by reason of resemblance or action can be called congeners. So I learned something new but will leave you on your own to search out whether or not tannins or congeners or both or neither cause headaches (white wine is lower in tannins) and whether or not white wine as good for you as red is supposed to be, because I’m not taking sides on any of this!

Later the same morning, when a pair of my favorite local customer friends showed up at my bookstore, Walt told me he was pretty sure that Suzette Haden Elgin, whose verbal self-defense books I’d mentioned in a recent blog post, had also written science fiction. Really? I had no idea but looked her up online and found out that the linguist and science fiction author were indeed one and the same person. Astonishing! 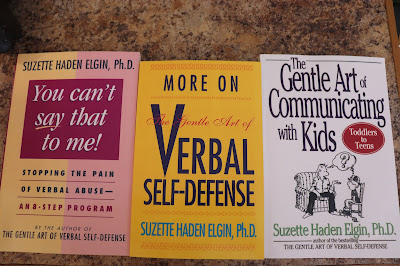 I was sorry to learn that Elgin died in 2015, because that means it’s too late to write and thank her for all her wonderful work. Not being a sci-fi reader, I have only read the books on language but am now keen to read her novel of feminist speculative fiction, Native Tongue, for which the author invented a new language she called Láadan, well prepared for the task by having written two doctoral dissertations, one on the English language and the other on the Navajo language. When philosopher Henri Bergson did his graduate work in Paris, there was a two-dissertation requirement, one to be written in French, the other in either Greek or Latin. I wonder if she wrote her second dissertation in Navajo.... 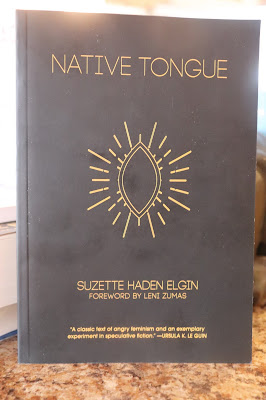 Native Tongue, I see now, is the first in a trilogy. Well, I’ll start with that and see how it goes. Elgin also founded the Science Fiction Poetry Association, it turns out, and was dedicated, through her Ozark Center for Language Studies, to reducing violence. And if you follow this link, you can see her photograph -- and doesn’t she look like a lovely person? I am very pleased to have learned so much more about her. Thank you, Walt!

P.S. For today’s postscript, I’m going to shed all modesty and share a compliment I received last week. The young man and woman were serious browsers, quietly discovering and showing each other various books, but finally he said to me directly, “Your bookstore is amazing!” A welcome compliment! When I asked where they were from, and they said “Brooklyn,” and I asked “New York?” and they said “Yes,” he added, “This place?” And he gave thumbs up as he said, “New York quality!” Then I’m sure I blushed! I know I laughed with joy. And yes, they bought books, too, a true sign of appreciation!

Learning and appreciation: pass it on! 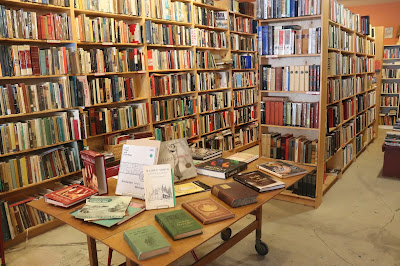 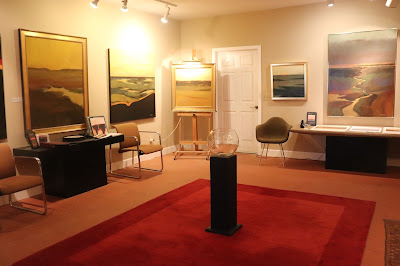 You're welcome, Pamela. And thanks for digging out that additional info about her; quite interesting :)

You are also welcome, Walt -- any time, as I hope you know! By the way, I am quite taken and convinced by the term 'speculative fiction' and plan to use it from now on. :)

Pamela! I’ve never heard of “congeners”, but I don’t read books about wine, so I’m learning also a new word. We both love our wines, and we get a lot of Argentine and Chilean, even Uruguayan wines, aside from a good selection from Portugal, Spain and of course, France (which cost more because.....ils sont français !) In my experience, tannins cause the headaches, but we here in Brazil have a counter attack: it’s a supplement of B vitamins and enzymes that help the liver, and the stomach, to digest alcohol. It’s called Epocler (ep - oh - CLAIRE). And it works, well, for me and others, yes. Drinking lots of water and having wine with food, also are ways to avoid heavy reactions. Well, that’s my wine story! The Dead Skunk 🦨 Song I’ll have to research.... OH! We are now residents of Brooklyn as you know, but we’re here in Sampa (São Paulo) half of the year; now we’re here ALL year because of Covid 19. BUT! You should take the compliment very happily about your bookstore, because there is one in Brooklyn called Unnameable Books (On Vanderbilt Ave. near Prospect Park), and your store Books in Northport 📚 is heads and shoulders above that one! Your selections, organization and your management of how you tell people about books are superior to any I’ve had experience with. Even Strand’s in Manhattan - too big and unwieldy. We had a real nice small one in Acton, Mass - the owner was my drummer for the high school musicals. But he didn’t read like you do! So smile 😃 proudly in those well-deserved compliments!

Jeanie, thanks for your tips for avoiding wine headaches and hangovers. As for a dead skunk song purportedly by Suzette Haden Elgin, a friend tracked it down to having debuted at a sci-fi conference but could not find the lyrics.

As for differences among bookstores, that's one thing I treasure about Indies: we are all different! Some are tiny and intimate, others huge and overwhelming -- and I love both and all those in between. Have only been to the Strand once but have never forgotten that wonderful experience! Some shops sell only new books, some only used, others (like mine) are a mix of the two -- and I love them all. Some have all kinds of toys and gift items, others only books -- but the ONLY thing that really turns me off is UNFRIENDLINESS! Luckily, that seems rare in indie shops, although many booksellers, being essentially introverts, can be shy people.

Having one's own bookstore is a dream for many people. I feel very fortunate to have been able to live the dream and keep it alive for over 27 years now, and I wish all success to ALL TRUE BOOKSELLERS!

(Thanks, Jeanie, for giving me an opportunity to mount that soapbox!)

Dear Friend, You deserve all the praise you’ve received! And I do understand your allegiance to bookstores - I can’t resist entering every one we encounter. Many wonderful-nesses to your 27 years, being able to live your dream.

One other hint to avoid hangovers is from the Homeopathic persuasion: From the French company, Boiron - Nux Vomica c 30. Take 8-12 pellets and you’ll find relief from overdoing “ eating or drinking to excess”. Most alternative shops carry Boiron products.
Just a view: We love South African whites, which seem to be crispy, refreshing and they have a Sauvignon Blanc that is quite wonderful on a hot Brazilian summer day. Beijos!!