Snippets From Township and Village -- “in these uncertain times” 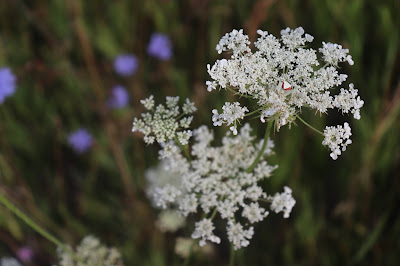 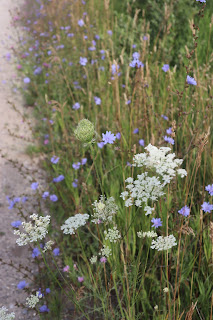 It will be August in only one week! Cherry harvest is underway. Nursery stock has begun to go on sale. In the wild, chicory and Queen Anne’s-lace are joined by spotted knapweed, that invader of Leelanau hills and fields that is, however, not despised by bees. No big festivals this year, nor small ones, either. Even the Thursday Evening Author series at Dog Ears Books is not taking place in this strange summer of 2020. We do, thank heaven, have farmers market in Northport on Friday mornings, something to anticipate eagerly all week long. 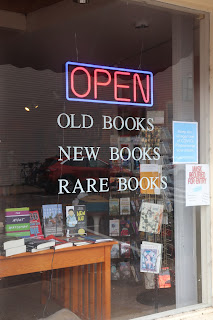 My bookstore is open Tuesdays through Saturdays. “You’re risking your life to sell books,” one local customer friend remarked yesterday in mild tones. Was he chiding me? Expressing gratitude? Did he feel his life was in danger when he came in to buy a local author’s memoir? I don’t know. These days, with all of us concentrating on wearing our masks properly, sanitizing our hands, maintaining correct social distance, and conducting business transactions as expeditiously as possible, I don’t get into many deep discussions in my bookstore.

My customers, however, continue to be cooperative and pleasant. They appreciate being allowed again into bookstores and libraries. And we readers are reading a lot these days, more than ever. I’m finally reading one of Bruce Catton’s books on the Civil War.

…During the last few years events themselves had been irrational; politics in America could no longer be wholly sane. Here and there, like flickers of angry light before a thunderstorm, there had been bursts of violence, and although political debate continued, the nearness of violence—the reality of it, the mounting threat that it would monstrously grow and drown out all voices—made the debaters should more loudly and appeal more directly to emotions that made reasonable debate impossible. Men put special meaning on words and phrases, so that what sounded good to one sounded evil to another, and certain slogans took on their own significance and became portentous, streaming in the heated air like banners against the sunset; and even the voices that called for moderation became immoderate. American politicians could do almost anything on earth except sit down and take a reasoned and dispassionate view of their situation. - Bruce Catton, The Coming Fury

Long a fan of Catton’s memoir, Waiting for the Morning Train, and his Michigan: A Bicentennial History, until now I have avoided his multivolume Civil War works, because, open almost any book on the Civil War and you are confronted with more dates and battles than you can shake a bayonet at. Officers are continually changing rank and assignment, troop movements are given in what a friend called, years ago, “penetrating and remorseless detail.” (The friend was talking about something else, but his instantly memorable phrase entered our household memory bank then and there, to be pulled out whenever an occasion calls for it.) History fascinates me, but it’s ideas and politics and journalism and people’s daily lives I want, not military strategies and campaigns. Strictly military history is not for me.

But I should have known that Bruce Catton could not write history that I would find boring!

American society was in turmoil in 1860. Underlying much of the turmoil were big changes in world economics and technology. Cottage industries were giving way to large-scale manufacturing that threatened the self-sufficiency of small farmers and villagers, and what was for so long a quiet, local American economy was becoming a global web, its threads set vibrating by events faraway and out of sight of workers. Whole populations were on the move. The North viewed immigrants from Europe with suspicion, while the South, clinging to their culture of slavery, saw their region’s dependence on imports spelling out eventual doom.

The Democrats could not agree on Stephen Douglas as a candidate for the presidency – as Catton put it, “the North derided him for liking slavery too much, and the deep South hated him because he liked it too little” – and finally the party split in two, with Northern Democrats running Douglas and Southern Democrats settling for Breckenridge. Everyone in the country, including William H. Seward, viewed Seward as a shoo-in for the Republican nomination, but somehow in the end the nod went to “gawky frontiersman” Abraham Lincoln. A fourth party brought forward yet another presidential candidate. Long before votes were cast, however, Southerners were planning state conventions to decide whether or not the expected election of Lincoln would be sufficient cause for them to secede from the Union.

The Artist likes to quote what he says is an ancient Chinese curse: “May you live in interesting times.” My own feeling is that there cannot have been any time on earth when life was not interesting, but I understand that he takes the saying as a reference to times of crisis and catastrophe, fascinating in retrospect but frightening and sometimes life-threatening as one is living through them. The year 2020 has certainly given us “interesting times” already, and it’s doubtful the year will grow any less interesting or anxiety-provoking as November approaches. Again, in our own time -- corporations shipping jobs overseas to cheaper labor markets or replacing workers with robots to boost the bottom line -- as in 1860, immigrants and racial minorities serve as political footballs.

Times of social upheaval, with technological and/or social innovations throwing a market for employment into disarray, have always put human beings at each other’s throats. Choose the particular hill on which you are willing to die, conveniently setting aside other complicated issues, and you have chosen your enemy -- who may well be your next-door neighbor. The editor of the Cincinnati Commercial described attendees at the convention in Charleston as “screaming like panthers and gesticulating like monkeys.”

Meanwhile, recent rain swelled and split local cherries. Not good. Creeks and lakes rise to destructive levels in many places. The sun shines on a regular basis to bring the annual parade of wildflowers to blossom, each in turn, and as Northern Lights waver tantalizingly overhead the comet Neowise hangs in the evening sky, and the International Space Station circles the earth. Here in the northwest lower peninsula of our state, we view the sky over Lake Michigan. Elsewhere in the country Americans scan for heavenly bodies and activity over fields of wheat or mountains or deserts.

And as the summer flies past, most of us, at least in Leelanau County, continue to take precautions against COVID-19. The future’s not ours to see. It never has been. But we should probably slow down and think about it a little more dispassionately. Talk less, listen more. Be slower to anger. Register to vote. 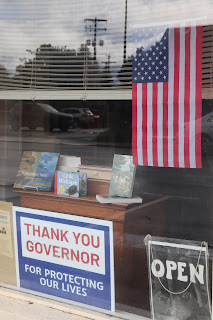 Pamela! Must get Bruce Catton’s memoir Waiting for the Morning Train. The quote you had from his ...Fury, sounded like a description of our situation right NOW! 1860..2020 and it’s amazing how similar it feels, especially with the overtones of violence. I hope Mr. Catton can make it here to Brazil....We’re good. Mr. Bobo Bolsonaro got the 🦠 Covid virus, but he’s not doing much for the poor people who are suffering here. Our São Paulo area is masked & gloved, and doing better than other less rule-following states. There are parallels with patterns of the infection in the US. Enjoy your Friday Farmers Market! Send more beautiful flower photos!

Jeanie, WAITING FOR THE MORNING TRAIN is one of my all-time favorite books! Any memoir by an excellent writer interests me, and Catton's growing up in Michigan sweetens the pot considerably. In his MICHIGAN, it is clear that he had a deeply tragic sense of history.

I hope you and Antonio are feeling safe where you are. We are certainly taking precautions here, and I'm grateful that most around us are doing the same.

I probably shouldn't blame you. But my interest was piqued and I pulled out Catton's "Never call retreat" from my Civil War section
in the downstairs den library. Thank you!! I didn't know he came
from your area, but that era still resonates with we 'yankees'. Our
WI forebearers formed regiments with Michigan volunteers to form the
famed (well, among the insiders) Iron Brigade, and as a kid, I used to walk through the cemetery home from school and ponder the little
ancient section of civil war dead and ponder the 'he fought to free
the slaves' markings. My high school mascot was 'Old Abe' the civil
war eagle still remembered in the NW Wi area. So I feel a bit akin
to historian Catton. Pleasant reading for a couple of weeks before I
tackle the human genome literature again...unless I see more tantalizing hints in upcoming posts. Meanwhile, I hope you are still
safe from the invisible scourge of novel virus (and bad weather).

Hi, BB. Good to hear from you again. It occurred to me this morning that my online communications, like written letters and phone calls, feel much more normal than face-to-face, masked, no-hugs-allowed, 6-feet-distance meetings with friends in person. You and I have only met online, so our relationship is what it always was, but when an old friend comes to my bookstore looking like Mata Hari and I can't even recognize her in mask and big-brimmed hat -- and when she does reveal her identity, we can't hug -- well, meetings of the latter kind, though welcome, are tinged with sadness.

Anyway, glad you are enjoying Bruce Catton, and though you grew up in Michigan I'm sure you would appreciate his history of Michigan (MICHIGAN: A CENTENNIAL HISTORY), as well as his wonderful memoir, WAITING FOR THE MORNING TRAIN.

Yes, we have kept well and are still being very cautious. Sigh! Seems the only way right now.... You stay safe, too!