Adventures Close to Home: Physical and Spiritual Hills and Valleys

Saturday morning’s walk with my neighbor and our dogs would have been better had I not opened a bottle of wine the night before. It was wine I’d been saving for company, and then Friday night I thought, well, that isn’t going to happen! And I yielded to temptation, with the result that I woke up only 15 minutes before Therese and her dogs (“Puppies are restless,” she texted) were ready to hit the trail. As we set out on the dirt road that leads to the old mine in the mountains (we never go that far), Therese noted, “You don’t seem to have your usual zip.” No, I did not. It was a short walk yesterday morning. Lesson learned. 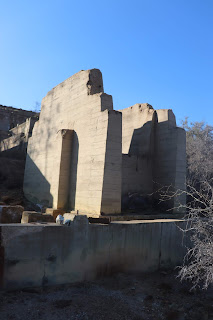 We don’t go as far as the mine, much higher in the mountains, but we do regularly visit some of the “ruins” of old mining structures. The walls in the image here, I thought, had quite a presence in the early morning light. But Therese teases me for lugging a camera along on these walks and directs remarks at Sarah, such as, “Hold still, Sarah. Your mom wants another picture of you!” It’s true. I do photograph my dog a lot. Although she is probably carrying a few extra pounds these days in dust alone, she is always beautiful in my eyes. 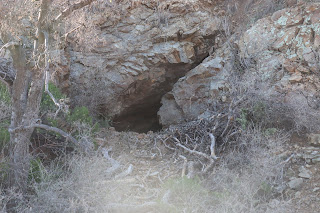 We humans keep a safe distance not only from one another (life in the time of coronavirus) but also from at least one select spot along the way, and we encourage our dogs to stay away from this one, too. Javelinas live in that cave! We do not need any close-up encounters with javelinas!

Plant life is safer. Cactus spines can be avoided by keeping a safe distance (and we are all about safe distance these days, aren’t we?), while other vegetation can be safely touched and examined. Look! Netleaf hackberry is putting out new spring leaves! What a cheery sight! And here a primrose, there a primrose — nice! 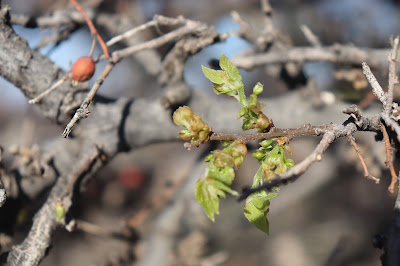 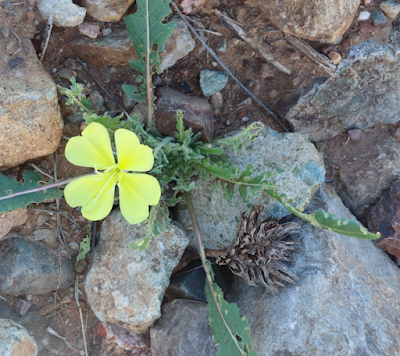 From the valley of a hangover to a peak of joy in the natural world, the walk with dogs was only one part of my day, the beginning, but it’s the only part for which I have visual images to share with you. Incidents after that, good and bad, were either not camera-friendly or not camera-worthy. I could have photographed the popovers that failed to “pop,” but why advertise such an abysmal failure?

One very bright spot of the day was e-mail from the friend who owns the building where the Artist and I have our studio/gallery (his) and bookstore (mine) back in Northport, dear Clare proposing a financial accommodation that lifted a big load of worry off our minds. We had been discussing the situation and wondering how much we could ask of her — and then she initiated a solution with terms more generous than we had considered requesting. Relief!

And you might think that would set me up for the rest of the day, but a couple of Facebook exchanges managed to plunge me into another dark valley. By this morning I finally came to a decision and posted the following on my status:

There was a piece on NPR yesterday about Internet outrage. People post stories about happenings that outrage them, and then other people chime in with their outrage, and everyone’s outrage builds, and everyone feels as if they’ve done something, but they have done nothing. The postings do not reach the people whose actions outrage them — and if they did, they certainly wouldn’t change any minds with ringing contempt and death wishes!

I understand the outrage some of my friends express. It comes from fear. I’m afraid, too. And I don’t mind criticizing government officials: after all, they are in positions of responsibility, and being criticized, even criticized harshly, comes with those positions. But I cannot join a chorus of disdain and contempt and hatred for ordinary Americans, whatever they are saying and doing, however misguided I find their views, however dangerous I find their actions. I certainly cannot wish death upon them! And reading posts filled with contempt and hatred and death wishes contributes nothing but agitation to my already troubled mind.

There were bright spots in my day yesterday, but a cloud hung over all, brought on solely by a couple of Facebook exchanges. So I am going to be looking less, reading less, and joining in certain comment threads not at all, for the sake of my own mental health. Yes, everyone is “entitled” to their feelings and their free expression of those feelings. I am, likewise, “entitled” to express my disapproval of their expressions. Freedom of speech is a two-way street. But I’m not changing any minds, either. I’m not convincing anyone to refrain from rants.

So right now I need to withdraw, even to pull away from certain of my friends. These times are hard enough for all of us. We all have our worries and fears already. And I do not find expressions of hatred helping me or anyone else, so if you want to engage in them, fine, but I’m turning you off. It’s what I need to do right now. And you won’t even miss me, I guarantee it.

That, at least, was my draft. [I have now broken it into paragraphs, here and on Fb, at a friend's request.] Pasting it into Facebook meant losing the italics — and you know I am addicted to italics! (Note to self: try to wean yourself away from italics. Good, strong writing does not need italics! Or underlining....) By posting that paragraph in blue above to Facebook this morning, I was able to climb back up to higher mental health ground, though my spiritual feet still slip from time to time — on the loose gravel, as it were — due to not having heard from an old friend since she last e-mailed a week ago to tell me her husband was hospitalized for coronavirus.

Ups and downs, joy and fear, gladness and anger. Deep breaths, deep breaths. I know you know what I mean. It is our world today.

Now I must run to the dictionary to find out what a javelina is.
Thanks, Pamela.

Nameless friend, I realize that many people refrain from Facebook and other such connections. I joined primarily for reasons of family and business but have been delighted to reconnect with old friends from graduate school, as well. I would not say that "most" messages are "boring and childishly explosive," by any means. Many more posts involve the beauty of nature or photographs of home-cooked meals or babies or pets. Many others are very thoughtful and moving. Many are informative, bringing to my attention news items I might otherwise have missed (with links to sources I trust). I am not arguing with anyone who choses to stay away from the platforms, though. I understand the choice. Guess I'm trying to have my cake and eat it, too:,i.e., enjoy the benefits and spare myself as many of the painful costs as possible.

You have probably found out by now what a javelina is, so I won't spell that out. Thanks for contributing to this old-fashioned online entity, a BLOG (web + log), kind of a backwater now in the days of faster, "sexier" social media.