Who Doesn't Love a Bestseller? 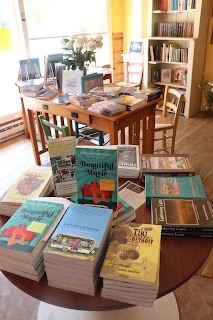 A poet and fiction writer in the Upper Peninsula, Ron Riekki, collects from Michigan booksellers every month their lists of top-selling titles by Michigan authors and then puts it all together for the state as a whole. It’s been interesting for me over the past three years to keep track of and contribute, month by month, my bestselling titles from Dog Ears Books in Northport. So it occurred to me this morning that other people might find it interesting, too, and here's the result -- July's hot books out here at the tip of the Leelanau peninsula!

Note: Not all books are pictured because they are on re-order. 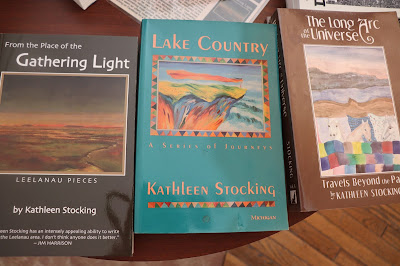 Leading the pack once again — no surprise — is Kathleen Stocking’s From the Place of the Gathering Light: Leelanau Pieces. Gathering Light is Stocking’s fourth book but the first since her Letters From the Leelanau (1990) that stays right here at home, with the people and places of our home county. Themes of geologic time and democracy on the ground are the threads with which these pieces are woven. I’ve sold 37 copies of this book in July, almost 70 since May 15, and there’s no end in sight, which makes sense because — truly — if you haven’t read Kathleen Stocking, you don’t know Leelanau.

It’s no surprise, either, to find Hard Cider, by Barbara Stark-Nemon, in the #2 position on my July list. The numbers for this title would have been higher still if we hadn’t sold out of available copies at her library event and if the book hadn’t been out of stock at my distributor’s warehouse. (I hope to have more copies soon.) This book seems to be catching fire elsewhere, too (hence the wait for restocking!), but it’s especially popular here because Northport and Leelanau Township are the setting. Locals and visitors alike will recognize familiar places (and a few people, e.g., Sally at Dolls and More) in this engaging novel featuring a mature woman reinventing herself as a cider maker in northern Michigan. Family complications and secrets add suspense to the plot. 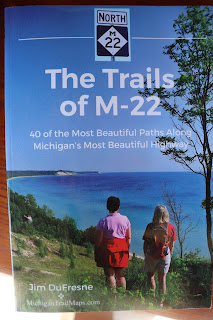 The Trails of M-22, by Jim DuFresne, certainly deserves its third-place position on my July bestseller list in Northport. As I’ve mentioned before when writing about this book, the author did not simply loop around the highway south of Northport but made it clear to the tip of Leelanau Township (M-22 and Beyond?). Each trail in the book is shown with a detailed map, with level of difficulty clearly indicated, so beginning hikers can enjoy choosing their first trails, while I’ve heard a couple of avid and dedicated couples say they plan to hike every trail in the book. 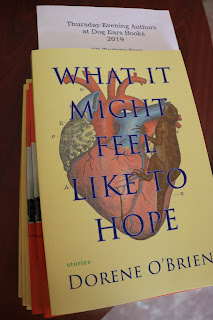 And fourth place goes to Dorene O’Brien, my Thursday Evening Author from July 25, with her short story collection, What It Might Feel Like to Hope. I’ve often remarked that most short stories seem darker in tone than most novels, and that was the case with O’Brien’s first collection, but this new book, while still introducing us to characters with difficult lives, does seem to offer hope on the horizon. Dorene’s bookstore presentation was delightful, too, giving us what one audience member later called “a magical evening.” More people should try reading short stories. I enjoyed this collection so much I've already read it twice this year!

Fifth place was a tie between Stark-Nemon’s Even in Darkness and Jim Harrison: The Essential Poems. I’m happy that Barbara’s first novel continues to find new readers and that the lovely small new Harrison anthology of poetry (posthumous) by the late Jim Harrison is also selling well. Since many of the early collections from which these poems have been selected are now out of print, Jim Harrison: The Essential Poems belongs in the library of long-time Harrison aficionados, as well as with readers only now discovering his work. A few of Jim’s novels were made into movies, his essays on food were published widely during his lifetime, but at heart Jim was always, first and foremost, a poet, and I believe his poetry will be his most enduring legacy.

Finally, another tie for sixth place: The Marsh King’s Daughter, by Karen Dionne, and Beautiful Music, by Michael Zadoorian. Translated into twenty-five foreign languages, with a movie now in development, The Marsh King’s Daughter, set in Michigan’s wild Upper Peninsula, has taken the world by storm. Who would have predicted it? The author’s deep knowledge of northern natural terrain is what drew me to the novel. Readers unfamiliar with Michigan, off in Sweden or Korea, may read it more simply for the thrilling suspense. And I anticipate Zadoorian’s Beautiful Music to soar this month, with the author’s guest appearance as my Thursday Evening Author on August 8. A coming-of-age novel set in 1970s Detroit, Beautiful Music tells a story of a loner adolescent who finds salvation in rock-n-roll. Yeah!!! I have also restocked Zadoorian’s previous novel, The Leisure Seeker (made into a movie with Donald Sutherland and Helen Mirren) as well as his dynamite collection of short stories, The Lost Tiki Palaces of Detroit. 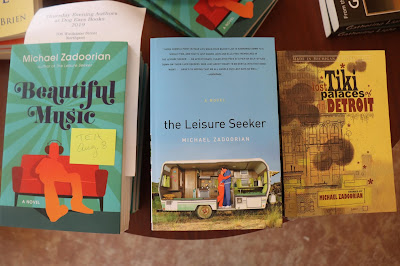 And there you have it — just a few of the “must” reads of summer 2019 in Northport, Michigan. Time to get started, if you haven’t already! And please join us on Thursday, August 8, 7 p.m. to hear and meet Michael Zadoorian!

Loved Leisure Seeker when it came out. Hope to be at your author event Thursday, still working out details, but I hope so! Loved many of the others too.

Oh, Dawn, I do so hope you can be here! I am re-reading Zadoorian's first novel right now, SECOND HAND, which I read long before I knew I might meet him someday. Thursday it is!

Am in Interlochen now, am visiting a friend tomorrow afternoon and should be at your store by 7!

Dawn, I'm so happy you were here for Michael Zadoorian! Everyone seemed to have a wonderful time -- good crowd, terrific reading, conversation and laughter, and good sales -- perfect evening with an author who is also a really nice guy!